She-Ra and the Princesses of Power Wiki
Register
Don't have an account?
Sign In
in: Episodes, Season 2 Episodes, Episodes that focus on Adora,
and 5 more 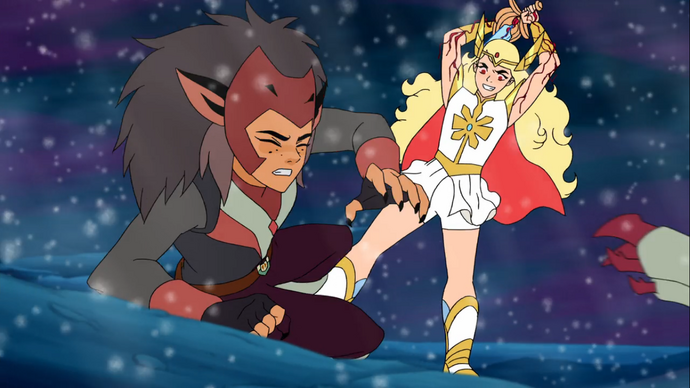 Roll With It
Light Spinner
White Out is the fifth episode of Season Two and eighteenth episode overall of She-Ra and the Princesses of Power. It was released on Netflix with the rest of the second season on April 26, 2019.

Sea Hawk takes the Squad to the Northern Reach of Etheria to scout out strange readings. Catra and her crew are already there with Entrapta and her drill bots. It turns out that the First Ones' Data Crystal Entrapta can't let go of causes some damage.

The episode starts with Entrapta and Catra doing research, way up in the Northern Reach of Etheria. Entrapta had her drill bots dig for a large piece of First Ones' tech that Catra assumed was a weapon. At the same time Captain Sea Hawk sailed Glimmer, Bow and Adora to the Northern Reach aboard the Dragon's Daughter V.

While Scorpia tried to emotionally bond with Catra she accidentally unboxed the First Ones' Data Disk that that Entrapta brought with them, it initially cut off the computers access to the drill bots. Entrapta objected to Catra handling the disk, explaining that it took away She-Ra's powers; but this only reinforced Catra's desire to use the disk. Scorpia's removal of the disk from it's protective box seems to have allowed the disk to instantly disrupt the communication between their computers and all of the Drill bots. And when they went to check on the bots, Adora and the team engaged the villains in combat.

After She-Ra subdued Catra, the latter infected the Sword of Protection with the data disk. This in turn infected She-Ra, causing her to go berserk and attack everyone in attempts to kill, friend and foe. She-Ra separated herself from her friends by causing an avalanche then Scorpia incapacitated She-Ra, who transformed back to Adora when she dropped her sword. It was then that some Snow Monsters indigenous to the area became infected by the data disk (which means that the Snow Monsters are First Ones' tech).

The heroes made their way back to the drill site, dodging the infected Snow Monsters. Sea Hawk took cover inside where Scorpia was trying to keep Adora safe, who's mind was muddled by the infected sword. There Sea Hawk and Scorpia commiserated about how their friends seem to take advantage of them.

In another part of the fortress, Catra, Glimmer and Bow fought each other and the infected monsters. Scorpia and Sea Hawk, with Adora in tow, joined in the attack on the Snow Monsters. The monsters seemed attracted to the disk and focused on Catra, who had the disk. During their attack Catra dropped the disk and Scorpia broke it after Glimmer and Sea Hawk encouraged her to.

With the disk broken, the snow creatures retreated and Adora returned to her normal self. Scorpia, Catra and Entrapta also retreated to their ship where Entrapta revealed the First Ones' tech she had discovered some time earlier. All parties returned to their respective fortresses.