She-Ra and the Princesses of Power Wiki
Register
Don't have an account?
Sign In
in: Episodes, Season 2 Episodes, Episodes that focus on Adora,
and 3 more 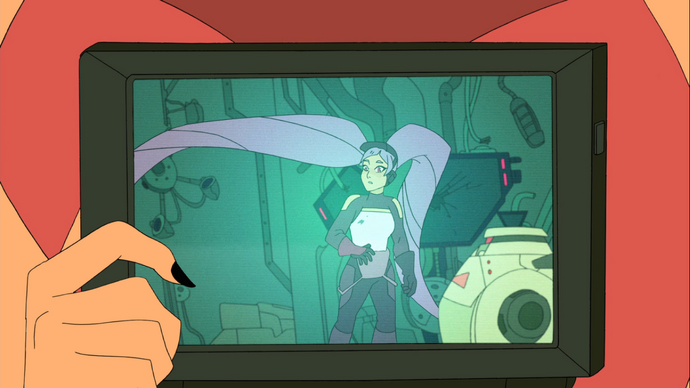 The Frozen Forest
Signals
Ties That Bind is the second episode of Season Two and fifteenth episode overall of She-Ra and the Princesses of Power. It was released on Netflix with the rest of Season Two on April 26, 2019.

Once they realize Entrapta is alive, Bow and Glimmer head to Dryl to rescue her. Light Hope sends Adora and Swift Wind to fix a First Ones' installation.

Adora is training with the Sword of Protection under the guidance of Light Hope, who points out that her attack would have been 57% more effective if she had support from her steed, and that her sacred connection with him is as important as any of her physical abilities. He is a part of her, their destinies are intertwined. Light Hope is glitching as she speaks because her system is overloading. She sent Swift Wind with Adora to go fix the Watchtower that Mara destroyed, forming their bond along the way. Light Hope believed that repairing the Watchtower would allow her to interface with the planet's mainframe and stop her glitches, as she explains that she has been functioning only at a fraction of her power since the Watchtower fell down.

Bow reveals to Glimmer that Entrapta is alive and making tech for the Horde, but they wrongly assume that she is an unwilling prisoner. They plan to go to Dryl to rescue her. Glimmer feels guilty and responsible for what happened to Entrapta, so she refuses any other help out of fear that someone else would get hurt. After entering Dryl, they overhear Entrapta and Kyle struggling with a bot prototype and assume that Entrapta was being tortured, so they attack Catra and Scorpia. When Glimmer and Bow escaped they accidentally teleport out with Catra and take her prisoner.

In a remote part of Etheria, Swift Wind and Adora find the pieces of the Watchtower and try to put them back together. It takes several attempts and a few personality clashes but they succeed. After they share their hopes, fears and aspirations a magical bond is formed and the Watchtower reconnects with the help of She-Ra and Swift Wind working together with loop-de-loops.

While in Glimmer's custody, Catra activates her homing beacon, letting Scorpia, Lonnie and Rogelio know of her location, the three rushing to her aid immediately. In the standoff, the hero's trade Catra for a promise that Scorpia would free Entrapta. Glimmer comes very close to torturing Catra, who is bound. It is only Bow's pleading for Glimmer to stop that prevents her from striking an unarmed captive. The heroes speak to Entrapta via “Etherian Skype” when she says that she did not want to leave the Horde and Glimmer and Bow left the villains alone after one last punch.