She-Ra and the Princesses of Power Wiki
Register
Don't have an account?
Sign In
in: Episodes, Season 4 Episodes, Episodes that focus on Adora,
and 6 more

The Valley of the Lost (episode) 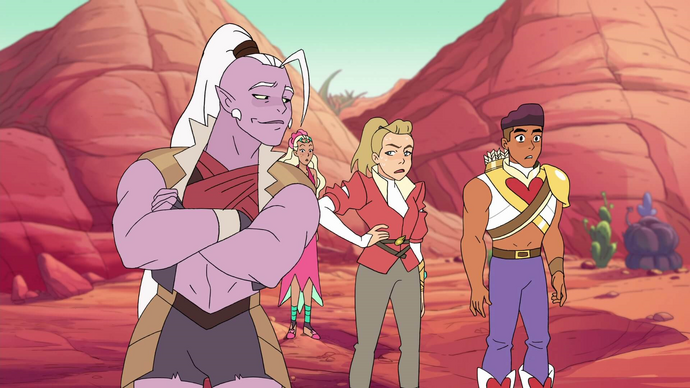 The Coronation
Flutterina
The Valley of the Lost is the second episode of Season Four and twenty-eighth episode overall of She-Ra and the Princesses of Power. It was released on Netflix with the rest of the fourth season on November 5th, 2019.

Glimmer sends Adora, Perfuma, Bow and Huntara to retrieve Mara's ship, but the Horde beats them to it. Catra meets Double Trouble, a shapeshifter. The heroes find Huntara's home, The Valley of the Lost.

Glimmer deploys Adora, Perfuma, Bow, and Huntara to the Crimson Waste to recover Mara's ship, initially intending to send Mermista instead of Perfuma before realizing that Mermista would be powerless in a desert. In the Waste, Huntara and Adora continually try to outdo each other until they arrived where the ship used to be, having been dragged away by the Horde.

Despite Perfuma's protestations to go home and depression over not being able to control cacti like other plants, the band eventually reaches The Valley of the Lost, a smuggler's den which used to be Huntara's home. There they find the place crawling with Horde soldiers, and are forced to restrain Huntara from attacking her former "goons". Huntara seeks out information from Grox, a former associate, but Grox betrays them and they are forced to flee pursuing Horde soldiers. Perfuma attempts to stop them by controlling cacti, but fails, and they resume their retreat.

Even as this transpires, Catra and Scorpia continue the salvage operation of Mara's ship for First Ones' tech. Eventually they are introduced to Double Trouble, who offers to work for them. Catra accepts and sends Double Trouble to pretend to be Catra convincingly enough to fool Adora.

In hiding, Bow reports their dire situation to Glimmer, who eagerly begins to teleport to their location. Afterward, Bow hacks into a Horde badge to locate Mara's ship. At the ship, Adora transforms into She-Ra to repel the soldiers while Perfuma discovers how to use cactus roots to lift the ship out of a chasm for transport. She-Ra also fights off and imprisons "Catra", who promptly escapes and reports back to the real Catra, transforming back into Double Trouble.

Glimmer arrives in the aftermath, disappointed that the fighting is over, and Huntara decides to return to the Waste full time to reclaim it from the Horde.

See: The Valley of the Lost/Transcript