She-Ra and the Princesses of Power Wiki
Register
Don't have an account?
Sign In
in: Episodes, Season 1 Episodes, Episodes that focus on Adora,
and 5 more 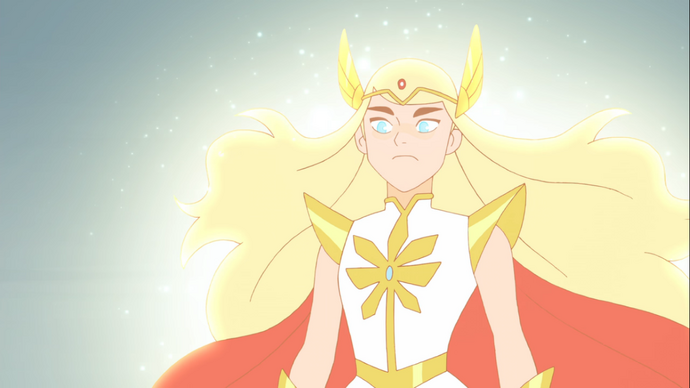 On the run from a monster, Adora, Glimmer and Bow stumble into an ancient First Ones' ruin, while the Shadow Weaver orders Catra to bring Adora back.

The episode begins at the exact moment from where the previous episode The Sword: Part 1 stopped. Adora, now as She-Ra, comes face to face with the monster. Glimmer and Bow see their counterpart, She-Ra, and Bow asks Glimmer if what he is seeing is real, and Glimmer says yes. She-Ra then looks at herself, and sees that she is no longer Adora, and then the princess falls and de-transforms. Glimmer runs to get Adora's sword because she's a Horde soldier. Adora asks what Glimmer did to her, Glimmer, still pulling the sword, does not understand what Adora is asking, and she says she did not know that being a princess was contagious. Bow tries to stop the fight, and he asks how as Adora has turned, and she says that she did nothing, says that she only took the sword and then she was crowned. Glimmer intrudes on the conversation and says that it did not matter what she did, and that it only mattered that they did not let her do it again. Glimmer gets the sword, but the monster's eyes glow, showing that he is still there. He stands up and the three of them look at the beast, which raises its paws and roars, crushing the ground and chasing them away.

Adora falls and Bow and Glimmer hide inside a tree, only to find out that the monster was going there. Bow then, in fear, takes Glimmer's sword and runs towards Adora asking her to become She-Ra again. Glimmer, angrily, teleports from the tree to Bow at the moment the monster would attack the tree where they were. Bow tells Adora what he wants her to do, but she says she doesn't know how and Glimmer says they do not have time for her to turn and that they should go, with the monster behind them again.

They start running with the monster on their tail, until they stop in a gorge and fall there. The sword slips from the hand of Adora, and she sees that they are on the grounds of a ruin. She asks what this place is, and Bow says he does not know, but that it would be much better in there than outside, with the monster between the forest and the ruins. The monster plummets and falls, along with some rocks that fall on top of it. The three run toward the door, and Bow tries to open it. Glimmer says she'll try to get everyone inside via teleportation, but Bow says no, that she had never teleported three people before. She asks if he has a better idea than that, and the monster roars again. Adora asks what was written there and if that was some password, and Bow asks if she can read it. She asks why he can't, but they are interrupted by the roaring monster again. Bow screams "What does it say?" and Adora says "Eternia," and the door shines and opens. And then they run inside before the monster gets to them.

Inside, Glimmer then creates a bright sphere, and Bow asks how Adora interpreted as Horde soldier, if she always managed to read that language that was spoken by the First Ones. Before Adora responds, Glimmer's sphere shines near them and Adora covers her eyes. Glimmer asks what exactly was going on there, but she says she told her she already said she does not know and that she just read the written word on the door. Glimmer asks Adora if she simply read a word in a language not spoken by a thousand years and that the door simply opened. Adora then gets up seeing Glimmer's doubts asking her if she thinks that she made the whole stuff on purpose or if she thinks she wants to be a princess, and yells to her "Princesses are Monsters!". Glimmer asks "Monsters?" and says that Adora is the monster. Bow tries to stop the rivalry chat by telling Glimmer that Adora saved them. But Glimmer says she does not care and that they can not trust Adora. She asks Bow if he has forgotten all the evil deeds that the Horde did and the people they lost. She says they need to find a way to Bright Moon as soon as possible and that her mother, Queen Angella, would know what to do with Adora. Bow thanks Adora for saving them from the monster instead of fleeing for her own life, Adora responds that she did not save them and she only wanted the sword. But Bow asks if she does not like them secretly, she disagrees, and explains that they are her captors. Bow says "Sure" in a dubious way.

They begin to walk, and Bow says that he thanks her anyway and says his name, Adora says her name and the archer says that "Adora" is a strange name for a Horde Soldier. Glimmer, in the front, tries to turn into She-Ra whispering "For the honor of Grayskull". Bow asks what they are doing, and the girl, trying to hide what she did, exclaims "Nothing", and to distract him, says to look at the carvings and say that maybe they are in a ruin of the First Ones. Adora asks what a First One is. Glimmer asks if she's ever heard of them, and Bow explains that the First Ones were the original settlers of Etheria and that they disappeared a thousand years ago but left a lot of technology and ancient ruins. Adora asks what happened to them, and Bow says no one knows and they just disappeared. He asks if the Horde has never told her about the First Ones, and Adora says there seem to be several things the Horde did not tell her. They stop in a hall and Glimmer says she'd like to leave, and Bow says that it would take them time to find the exit.

The archer asks if Adora wants to turn on the lights, but she says she does not know how. He says he must have some magic word, he asks how the First Ones spoke "lights". She says he does not know and that she is not magic. Glimmer agrees and has the idea to make the sphere grow to create more light, but Bow says they are away from Bright Moon and it would take her to recharge, she yells at Bow, embarrassed. Adora asks if she has to recharge her powers, and Glimmer tells Bow if they can not talk about recharging in front the Horde soldier. Then she tells him to step away, avoiding Bow's warning, and throws the shiny ball to the top of the ruin. Adora is impressed, Glimmer gets a little weak and Bow runs to her, but she says that it's okay, and everyone sees a pedestal of a picture that looks like She-Ra. Bow says it's Adora, but she says that it does not look anything like her, and Bow explains that it was the other one with a cape. Bow asks if she can read the inscription on the image and she says with determined focus "She-Ra".

Then the pedestal shines and illuminates the rest of the place, and a hologram appears in the front and says "Greetings, administrator". Adora, wary, asks what it is, and the hologram says "What is your query". Bow acknowledges that it is an ancient hologram. He asks it what that place is, and without an answer, asks how they get out of there, and the only answer he gets is "What is your query?". Glimmer says the hologram is old and does not know how those things work until she runs her hand through the hologram and it turns red saying "Administrator not detected" and "Lockdown initiated". Then a lockdown begins, doors start to close while one of them breaks. Glimmer steps back scared, and Bow tries to tell the hologram to cancel the lockdown. The ceiling starts to crumble and Bow tells Adora to try to stop it, and she asks what he thinks she can do. The hologram replies "Query not recognized". Bow says she must have a password or something and Adora tries different words to no effect. She decides to become She-Ra but Glimmer does not want to give her the sword because she is from Horde. Then the princess realizes that part of the ceiling will fall on them and then grabs Adora and Bow and teleports before the piece hits them.

They end up high in the sky and fall from there with Glimmer unconscious. Before they fall to the ground, Bow shoots an arrow that creates a net which breaks their fall. Glimmer wakes up and discovers that his plan worked. Glimmer says he's okay, and Bow says he foresaw that. Glimmer is ashamed, and Bow tells her not to teleport until they arrive at Bright Moon. And she indicates she's ashamed that she has to recharge. Glimmer asks Adora why she didn't run away, Adora answers, “If I go back I'll never find out who I am or where I came from.” Bow extends a hand of friendship but Glimmer makes it clear she does not trust Adora.

In the Fright Zone, Shadow Weaver grills Catra about the whereabouts of Adora and reveals that she has tracked Adora down, without Catra's help. Shadow Weaver tells Catra to go find Adora and when Catra refuses Shadow Weaver uses her magic to paralyze her. In Thaymor, Glimmer disguises Adora with her own cloak. Adora is mesmerized by the party atmosphere, fun, games, storytelling and food. And when Adora sees a horse for the first time, uttering the line "What. Is. THAT?" she gets weak in the knees but Bow introduces them and Adora says, “This is the best day of my life.” Then the Horde tanks overrun Thaymor sending the citizens fleeing. Glimmer rounds on Adora for being an ally of the Horde. Adora reveals she's been ignorant of the Horde's evil plans. She confronts a Horde tank that is piloted by Catra. Catra and Adora quarrel about the attack while Glimmer and Bow fight the Horde soldiers. Catra reveals to Adora that they've both been manipulated by Shadow Weaver and Hordak, and they they should return to the Fright Zone. Adora instantly defects from the Horde and starts to defend the village but Catra stuns her with her weapon.

Glimmer and Bow find Adora and attack Catra. While Bow fights Catra one on one Glimmer gives Adora the Sword of Protection and begs her to help. Adora grabs the sword and shouts, “For the honor of GRAYSKULL!” And transforms into She-Ra. As Bow and the horse are surrounded by Horde soldiers and tanks he is resigned to fight to the death but She-Ra enters the fray and makes quick work of the enemy. The enemy retreats and after She-Ra transforms back to Adora she watches as Catra leaves, full of anger and heart-break.

The Trio celebrates with Horsey, as they've named the horse, and heads home to Bright Moon.