She-Ra and the Princesses of Power Wiki
Register
Don't have an account?
Sign In
in: Episodes, Season 1 Episodes, Episodes that focus on Adora,
and 7 more 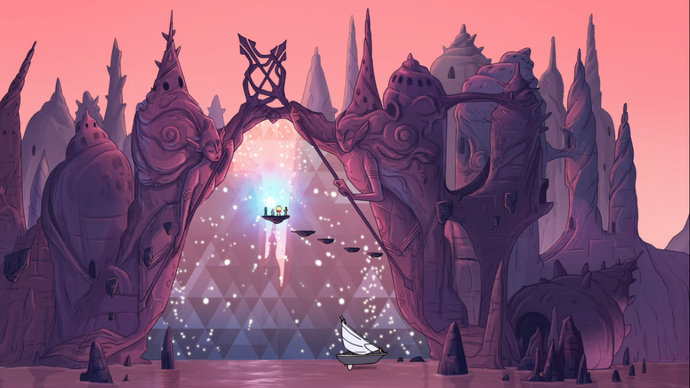 Flowers for She-Ra
System Failure
The Sea Gate is the fifth episode of Season One of She-Ra and the Princesses of Power. It was released on Netflix with the rest of Season One on November 13, 2018.

The Best Friends Squad heads for the water realm of Salineas ruled by Princess Mermista. They enlist the help of a captain named Sea Hawk to take them, but Mermista's past with the smooth-talking sailor make for some awkward moments among the group. Catra sets sail with Force Captain Scorpia to foil their plans.

During a war council meeting in Bright Moon, Queen Angella asks for suggestions about what to do next. Glimmer volunteers herself, Bow and Adora to go to the kingdom of Salineas to recruit Mermista in the Princess Alliance. The Queen reluctantly agrees to let them go on the condition that they avoid violence and danger.

They look for a captain with a ship in the city of Seaworthy, a city which looks remarkably like Mos Eisley spaceport on Tatooine. They convince Captain Sea Hawk to join them after Adora beats him in an arm-wrestling match. The captain claims to have a very close friendship with Mermista and guarantees them an audience with her.

Shadow Weaver's shadow spies had followed the Trio to Seaworthy and reported their position to Shadow Weaver who sent Catra, Scorpia, Kyle, Lonnie and Rogelio to intercept them. While sailing to Salineas, Scorpia reveals her love of the sea and Catra reveals she gets seasick.

The trio and Captain Sea Hawk sail to Salineas via the Straits of Serpentine on Sea Hawk's boat Dragon's Daughter III. He tells the crew that he has a habit of setting his ships on fire as his signature battle move. The Trio has excellent shipboard skills that impress the Captain, Bow is star-struck when the Captain praises his knot tying abilities. The Captain entertains the crew with sea shanties, which everyone loves, especially Bow. Glimmer finds out that the Captain purposefully brought them out of the way to experience an adventure with a giant sea-serpent, causing much consternation. But She-Ra easily defeats the monster and they move on.

Catra and the crew get to Salineas before the heroes and are angry that Shadow Weaver didn't tell them that there was a sea gate blocking the path to the castle. Also, Scorpia tells Catra that there is a “Force Captain orientation” that Catra never went to.

The heroes arrive in Salineas to find that the kingdom is woefully understaffed and in jeopardy of falling to the Horde. And that many residents have fled because the Sea-Gate is falling apart. Glimmer offers to help if Salineas joins The Rebellion. Mermista and Sea Hawk trade jabs over him getting her kicked out of the Dolphin Social for challenging a doorman to a duel and the time he set their gondola alight in the Tunnel of Love, presumably on a date gone horribly wrong. Adora finds out that the Sea-Gate gets its power from The Pearl, Salineas' Runestone. She deduces that the connection between the gate and Runestone must be damaged.

Mermista agrees to join the Alliance if Adora repairs the gate. She turns into She-Ra and uses the Sword of Protection's powers to begin healing the gate. Sea Hawk retreats to his boat and tries to run away, sulking. He tells Glimmer he's lonely for home and the two bond.

Catra and crew begin an attack on the Sea-Gate. Mermista and Bow return the attack to the Horde ship and crew. Sea Hawk saves Bow's life in a gallant and stunning rope swing save maneuver, which is totally adorable. Glimmer tells the captain to do his signature fire-ship attack on the Horde ship. While She-Ra continues to heal the gate Catra attacks and mocks her in an attempt to distract her from her mission. Mermista and Bow save She-Ra from Catra with a water attack.

Glimmer and the captain set his ship in fire and crash it into the Horde ship, causing Catra and crew to retreat. She-Ra completes her healing of the Sea-Gate to Mermista's surprise. She then gives Sea Hawk a new ship, which he does not promise to not set on fire. Mermista agrees to join the Princess Alliance, Bow and Sea Hawk then entertain the heroes with a great sea shanty duet.