She-Ra and the Princesses of Power Wiki
Register
Don't have an account?
Sign In
in: Episodes, Season 3 Episodes, Episodes that focus on Adora,
and 9 more 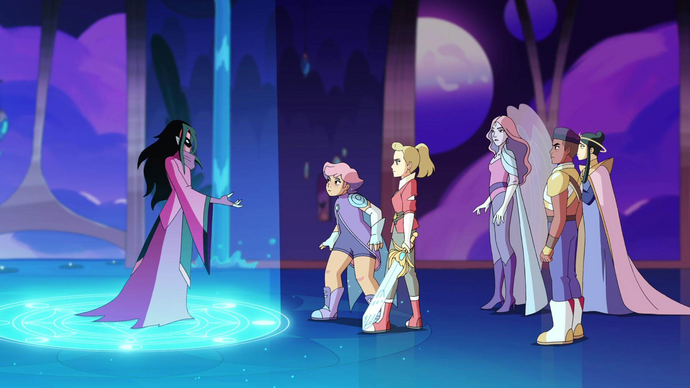 Shadow Weaver appears in Bright Moon refusing to speak to anyone but Adora. As Catra awaits her punishment, Entrapta pushes Hordak towards completing the portal project.

The episode beings where the previous one left out. Shadow Weaver stands menacingly over Adora's bed in Bright Moon, and when she reaches for her, Adora wakes up and draws her sword. Shadow Weaver then collapses at Adora's feet, exhausted. In response, Queen Angella doubles the perimeter guard and triples it around The Moonstone, attempting to ascertain how Shadow Weaver entered the castle and thus close the security vulnerability. Castaspella however, comments on how Angella's "dungeon" that holds Shadow Weaver is inadequate, and Angella admits that it is just a side room with some (but not all) of the cushions removed.

Adora, Glimmer, and Bow arrive, with Adora demanding to take part in the interrogation. Angella flatly refuses however, citing safety concerns, and orders the trio not to go anywhere near Shadow Weaver. Angella and Castaspella enter the room, and Adora rages that she knows Shadow Weaver's tricks, although Glimmer tries to talk Adora down, agreeing with her mother for once that Shadow Weaver raised Adora and could potentially manipulate her. Adora disagrees, and tries to slyly feign to agree to not try to talk to Shadow Weaver, but Glimmer and Bow both instantly surmise that she is faking it. Adora keeps up the act for a moment, but then rushes toward the door and Glimmer is forced to teleport her away.

Within the "prison", Shadow Weaver, although bleary, is also unimpressed by the posh Bright Moon "prison", much to Angella's consternation. Shadow Weaver mocks Angella, saying she can clearly tell her to be Glimmer's mother "by the way (her) voice grows shrill when (she) scream(s)". Castaspella cuts in, saying she will pay for her crimes while teaching her brother (and Angella's late husband) Micah, and when Shadow Weaver mentions him that Angella orders her not to "speak his name", to which Shadow Weaver replies "I am not he one who got him killed". Castaspella restrains Queen Angella while Shadow Weaver coughs and admits that she is here with information to defeat the Horde, only to be given to Adora.

In the Fright Zone, Catra is now a prisoner. Scorpia arrives to break Catra out before the assembly witnesses her punishment, but Catra sends her away despite Scorpia saying Catra means everything to her. Back in Bright Moon, Glimmer is asleep and Bow is staring hard at Adora, trying to stay awake to prevent her from going after Shadow Weaver. Adora eventually pretends to nod off, and when Bow also falls asleep, Adora sneaks away. However, before she reaches the "prison", Glimmer teleports before her and spirits her back to her room. Adora attempts many times more, but each time Glimmer simply teleports her back to her room. The trio talk, with Glimmer and Bow insisting that Shadow Weaver will just manipulate Adora as Shadow Weaver is from the Horde, and that evil people do not change. Adora fires back that she changed, and left the Horde, and asks them to trust her. They agree, on the condition that they go in with her for the interrogation.

Once more in the Fright Zone, Entrapta asks Hordak to send Catra out to retrieve one last piece of First Ones' machinery in order to complete his portal. Hordak replies that she is being sent to Beast Island, which confuses Entrapta, as Catra managed to increase the Horde's productivity by "400%". Entrapta continues that Catra was by far the most successful in retrieving First Ones' artifacts, which were the most useful in advancing their technology, and finishes by saying that Catra is needed to go into the Crimson Waste to recover a specific artifact. Hordak is unmoved however, and flatly denies her, and she leaves disappointed.

Shadow Weaver instructs Adora on using the Runestone within her sword, whose power she may channel as a Princess. Adora fails and becomes frustrated, and so Shadow Weaver insists that she calm down and attain peace within her mind, lest her frustration turn the energy destructive. Shadow Weaver has Adora come closer, telling her that she is afraid of her power and must move past it, at which point Adora successfully draws power from the sword even as Angella and Castaspella barge in. Despite their demands to know what is happening, Adora wields the power she has drawn forth to heal Shadow Weaver.

Despite Angella's protestations, Adora then demands Shadow Weaver keep up her end of the bargain. Laughing, Shadow Weaver easily relays that Catra betrayed her and Hordak cast her aside, and that with no where else to go, she wants to help them defeat the two. She then tells them of Hordak's plan to create a portal to draw the rest of his army through in order to finish conquering Etheria. Angella is shocked that Hordak could have even more soldiers, to which Shadow Weaver says the army they failed to hold off for years was only his "paltry" force, a fraction of his full might. Glimmer disbelieves, having no concept of worlds beyond their own and assuming that Shadow Weaver is scaring them when they are (supposedly) on the brink of defeat. Shadow Weaver says she gains nothing from lying, that the proof is right in front of them, in Adora, who Hordak pulled through a portal from another world after only successfully opening it for a moment. Neither Glimmer nor Bow believe her, but Adora runs from the room.

Flying on Swift Wind to Light Hope, Adora demands to know what she is and where she came from. Light Hope confirms that Adora came from a different world, stolen via portal by Hordak, and reveals that the Sword of Protection is keyed only to First Ones, who came from "beyond the stars"; Adora is a First One. Adora asks if she can return to her family, asking why Mara destroyed their portal capabilities, but Light Hope says that is irrelevant and that re-establishing portals with the rest of the universe would have dire consequences. Adora asks if she has a say, to which Light Hope replies "no", and so Adora leaves in anger. Light Hope says to herself that "it is happening again."

Returning to Bright Moon, Adora says that she intends to move on to the Crimson Waste to investigate the message from Mara, who she believes has answers regarding her identity. Glimmer and Bow accompany her. In the Fright Zone, Hordak prepares to sentence Catra until she insults him and says he does not know how to run the Horde, at which point he overrides her and tells her to save it, as she is not to be punished. Instead, she is being sent to the Crimson Waste on Entrapta's advice, a dead zone where supposedly none make it back alive.

See: The Price of Power/Transcript

See: The Price of Power/Gallery