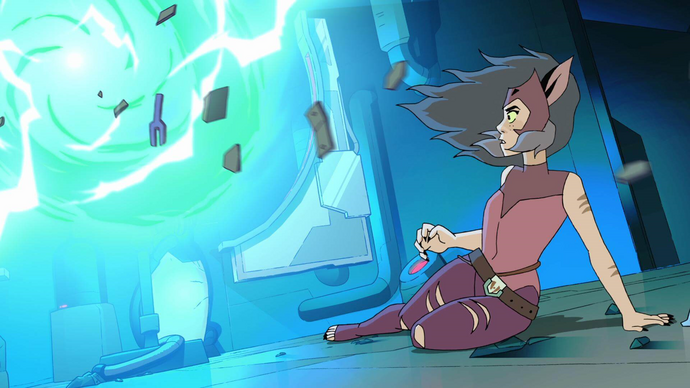 King Micah and Queen Angella are shocked by Adora's story. With time to restore reality running out, Adora turns to Bow and Glimmer for help and look for Entrapta.

Glimmer is seen playing with her mother Angella until Micah, her father, arrives. They are interrupted by news that someone infiltrated Bright Moon, and Adora is brought forward in chains. Glimmer feels strange familiarity toward Adora, and brings a considerably more bookish Bow to go spy on her during interrogation. Micah casts a truth spell on Adora, and Adora rapidly tells her unbelievable tale of reality falling apart, but Micah sends her away to the "prison" (the spare room).

Glimmer and Bow teleport into Adora's cell to question her, and Adora reveals she knows their secrets, about Bow's dads and Glimmer's difficulty making friends. They don't remember her, but they find their memories not fully complete, and they know that everyone has been telling them that things are perfect. Reality begins to fall apart there also, so Glimmer and Bow let Adora take the lead to travel to Dryl to reach out to Entrapta for help fixing reality. Angella tries to stop them from leaving, but they fall through the floor and suddenly find themselves in Dryl, Entrapta surprised to see them and not knowing who they are.

Angella however has pieced together that what she is seeing is not real, which saddens Micah. Angella then leaves Micah to go help Glimmer, even as Micah is obliterated by the unraveling reality. In Dryl, Adora prepares to be disbelieved when she explains to Entrapta that reality is falling apart, but Entrapta is already well aware, saying that it can be turned off but only if someone does so within the portal itself, meaning they would be trapped between dimensions for eternity. Adora asks Entrapta to remember, and after some concentration she does remember everything. Reality begins to deteriorate in the castle, and Entrapta explains that as the portal was created via the Sword of Protection it is in fact centered on Adora herself and following her, that she must go within the portal and remove the sword from it in order to set reality aright.

The Best Friends Squad then finds themselves suddenly in the woods at the Beacon, only now the stars are out. Mara is suddenly present but is quickly enveloped in more light. Adora then amends to enter the light herself in order to remove her sword, wishing her friends to stay behind, but they suddenly remember her and refuse, wanting to be by her side. They hold hands, but then Bow and Glimmer both fade and vanish. Adora breaks down crying, only to see Catra above her, corrupted by the tears in reality. She attacks, them both vanishing and reappearing in random places throughout Etheria. Each time, Catra continues to blame Adora for all that has happened, until Adora becomes angered and begins fighting Catra back. She eventually punches Catra, knocking her out, and they both fall into the rift, Catra disintegrating into nothing.

As Adora descends, she begins to fade as well, until Angella appears flying through the light to grab Adora and fly her out of the rift to safety. She asks how to fix the world, and Adora relays that she must go into the portal and take the Sword of Protection from it, fixing everything. Angella asks if Adora herself shall return, but Adora says she must sacrifice herself. Angella denies this, however, and tells Adora a secret, admitting to Adora that she is a coward. She says she has always been the queen who stays behind, Micah being the brave one, and that she always let Glimmer make the hard choices because she was afraid. She continues that when Adora came, she inspired them all, inspired Angella to choose to be brave.

Angella then flies into the vortex, grabs the Sword of Protection, and with her last words says "take care of each other", before ripping the sword out of the vortex and causing an explosion while closing the portal, leaving the sword to float down to Adora's hand. With no sign of Angella, Adora finally becomes She-Ra again, and time reverses back to the instant that Catra opened the portal. Everything stops moving, toward the portal, and She-Ra steps forth from it, slashing it closed behind her. Hordak and Catra then retreat, and although Frosta, Perfuma, and Mermista arrive to celebrate, Shadow Weaver insists they depart immediately due to the danger. Shadow Weaver and Glimmer grab hands, and once again sorcerers power envelops them all, detonating as they all teleport away.

Arriving back in Bright Moon, everyone celebrates, even Shadow Weaver being hugged by Perfuma. Glimmer is worried her mother will ground her, but She-Ra transitions back into Adora, telling her of Angella's sacrifice. Beyond Despondos, Horde Prime receives Hordak's transmission, realizing where Hordak is.

Retrieved from "https://she-raandtheprincessesofpower.fandom.com/wiki/The_Portal_(episode)?oldid=38027"
Community content is available under CC-BY-SA unless otherwise noted.