She-Ra and the Princesses of Power Wiki
Register
Don't have an account?
Sign In
in: Factions, The Horde, Villains,
and 3 more

The Horde, also known as the Evil Horde, was an oppressive intergalactic empire founded/ruled by Horde Prime, which has conquered the vast majority of the known universe. It is the main antagonist group of She-Ra and the Princesses of Power.
A division of the Horde led by Hordak ruled in Etheria from the Fright Zone and was fighting The Rebellion to remain in control of the planet. Its goal was to open a portal from Despondos to the known universe and let the Horde into Despondos.
In Season Four, after Etheria is brought back to its original dimension as a consequence of Glimmer's recklessness, the Horde Armada arrives, replacing Hordak's all but destroyed army of Horde Soldiers. The Horde was ultimately defeated by Adora, the current She-Ra when she used the fail-safe to free the magic stored inside the Heart of Etheria and destroyed the evil empire and its leader.

Information about Horde soldiers can be found here.

The Horde was founded by Horde Prime at some point in the ancient past, though its exact origins remain somewhat mysterious. Using an armada of spaceships, the Horde traveled through space conquering world after world and expanding their empire. Their greatest rival was the First Ones, whom the Horde wiped out.

Horde Prime used clones of himself as soldiers in his armada. A clone who was Horde Prime's greatest general was declared defective by Horde Prime so the clone was sent on a suicide mission.

During this mission, the clone fell through a portal and crashed on Etheria. With nothing but his broken ship, he built his own division of the Horde. He planned to eventually build a portal so he could bring the rest of the Horde forces to the planet so they could conquer it and prove that Horde Prime was wrong about him. At some point, the clone gave himself a name: Hordak.

Hordak has been on Etheria for an unknown period of time. During this time his division of the Horde has succeeded in conquering much of the planet. In order to defeat the Horde, a group of kingdoms and their leaders came together to form the First Princess Alliance, but this alliance was ultimately unsuccessful and after a major defeat it disbanded.

The Horde lost Adora, a promising recruit and force captain, who defected to The Rebellion. The Horde attacked Thaymor and was driven off by She-Ra and company. They then tried to drive out the Plumerians by poisoning their land but were defeated again by She-Ra. They successfully kidnapped Bow and Glimmer from Princess Prom and negotiated a prisoner swap with Queen Angella, but that plan failed due to the intervention of the Princess Alliance. They nearly destroyed the Whispering Woods by using the Black Garnet's connection to the planet and attacked Bright Moon but were barely repelled by the entire Rebellion. This left many Allied places unguarded and the Horde used the opportunity to take several strategic targets such as the fort they held in Season Two episode "Roll With It".

Using the stolen Data Crystal the Horde empowered their weapons and tech, creating new more powerful bots that they used to swarm the Whispering Woods. The Horde lost control over a fort when the Princess Alliance overwhelmed them. Catra, Entrapta, and Scorpia secured a lot of First Ones' tech from the Northern Reach. Shadow Weaver escaped from the Fright Zone and traveled to Bright Moon.

Hordak sent Scorpia and Catra on a mission to the Crimson Waste to look for more First Ones' tech. Entrapta used the First Ones' tech from the Northern Reach to power and enhance Hordak's portal machine. Catra successfully opened the portal, almost erasing all of reality but was stopped by She-Ra.

The Horde managed to increase their number of victories thanks to Double Trouble acting as a spy that infiltrated The Rebellion, but after the Heart of Etheria supercharged the princesses most of Hordak's forces were defeated. Then Horde Prime finally came to Etheria. Hordak's memories and personality were erased and were taken away by his fellow clones, while Catra and Glimmer are trapped on Horde Prime's ship and Horde Prime decided to use the power of the heart for himself, showing that the real battle had just begun.

The Horde of Etheria's fate is unknown, with it heavily implied that all assets of Hordak's division was subsumed into Horde Prime's forces, with an occupational force stationed within the Fright Zone. Horde Prime would replace Hordak as the primary antagonist of the alliance, occupying towns and invading with overwhelming numbers. When Adora and her friends snuck aboard the Velvet Glove to rescue Catra, Horde Prime revealed his motive of implanting chips on disidents, to ensure they would be encorperated into his hive mind. This became very detrimental to the alliance when members of the rebellion were chipped.

Catra in the intro 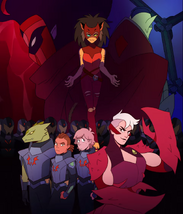 The Horde in the intro(season 1-3)

Entrapta in the Fright Zone

Scorpia and Catra at the Princess Prom 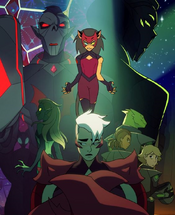 The horde in the intro (season 4)

Prime with Glimmer as hostage
Community content is available under CC-BY-SA unless otherwise noted.