She-Ra and the Princesses of Power Wiki
Register
Don't have an account?
Sign In
in: Episodes, Season 2 Episodes, Episodes that focus on Adora,
and 8 more 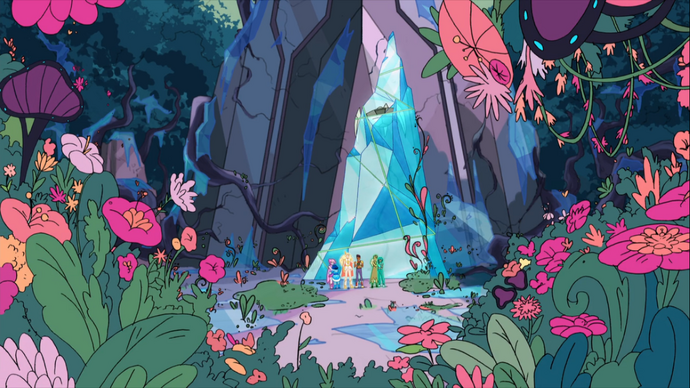 The Battle of Bright Moon
Ties That Bind
The Frozen Forest is the first and premiere episode of Season Two, being the fourteenth episode overall of She-Ra and the Princesses of Power.

This episode was first released together with Season Two on April 26, 2019.

Horde bots attack the Whispering Woods, and the Princesses need to capture one of them intact. While Glimmer struggles with leadership, Catra has no such problems leading a Horde attack with new and powerful bots never before seen!

A month had passed since The Battle of Bright Moon, and there were Horde Robots swarming in the Whispering Woods as it healed from being frozen. The Princesses, along with Bow (excluding She-Ra), managed to take out the bots.

While the rest of the Princess Alliance defended Bright Moon, Adora trained as She-Ra within the The Crystal Castle, under the guidance of Light Hope. She-Ra practiced transforming the Sword of Protection using a simulation of Catra, but ultimately failed because she was unable to bring herself to hurt simulation Catra. Near the end of the training session, Light Hope warned Adora not to repeat the mistakes that Mara had made.

Meanwhile, in The Fright Zone, Horde soldiers trained in a battle simulator under Catra's supervision. It comes to be known that Entrapta had all of her stuff from Dryl sent to the Fright Zone. Catra, Scorpia and Entrapta watched live feeds of bots fighting and losing to the Princesses and Bow.

The Princess Alliance held a war council in the premises of Bright Moon, where they find out that Thaymor had been taken back from the Horde’s control by Netossa, Spinnerella and Swift Wind. Bow proposed a change in tactics; he planned to capture a bot so that he could study if for weaknesses. Queen Angella sent them into the Whispering Woods where they encountered some enhanced bots that behaved differently that the normal bots.

Entrapta had introduced new Horde Technology created while the Princess Alliance fought: EKS, Emily's kid sister, and three other enhanced bots. The robots were then sent on a mission to get First Ones' Technology from The Beacon, where they fought Bow and the Princesses. Then, the heroes destroyed three enhanced bots and captured one for study. The Princesses activated their collected powers by working cooperatively. This enhanced the healing of the Whispering Woods, of which Perfuma was ecstatic about.

Later on, Catra visited Shadow Weaver in her cell, but only ended up quarrelling with her. Bow found First Ones' Technology inside the enhanced bot, proving that Entrapta was indeed alive and currently working for the Horde.