She-Ra and the Princesses of Power Wiki
Register
Don't have an account?
Sign In
Advertisement
in: Locations, Kingdoms, Hordak,
and 4 more

The Sword Part 1
The Fright Zone is the kingdom where Hordak rebuilt his army after being transported to the planet Etheria through a portal. It is one of the main seven Kingdoms of Etheria, and was formerly ruled by a race of Scorpion hybrids before the arrival of the Horde. It is the home of the Black Garnet Runestone.

The Fright Zone exists within a barren, polluted wasteland full of broken-down machines and buildings. It is comprised mainly of aging technology, pipes, and piles of discarded junk situated within what appears to be a large crater with raised, spiked edges. At the center of The Fright Zone, there's a large tower or ship with jagged edges that resembles a giant insect. Leading out of the Fright Zone, a large canyon filled with machinery opens up to a field of flowers before approaching the Whispering Woods. The woods act as a barrier that prevents the Horde from entering Bright Moon. After Adora freed the magic stored in the Heart of Etheria in Season Five, the land and buildings in The Fright Zone all became covered with vegetation.

Scorpia's people, the Scorpioni, once lived in The Fright Zone, presumably for generations. They had possession of an Elemental Runestone — the Black Garnet, which was given to Hordak by Scorpia's family after he invaded (however, the episode Light Spinner seems to imply that The Horde took it by force). According to Scorpia, the Horde crash-landed in her backyard [1]. The Horror Hall was the court of the kingdom, and it was presided over by Scorpia's royal family. Once Hordak assumed control over The Fright Zone, it remained the base of operations for The Horde on Etheria. Later on, throughout their childhood years, Adora and Catra become the center members of the Fright Zone, and Adora was even promoted the the exalted position of Force-Captain. But, after Adora saw the beautiful but suffering world outside of the Fright Zone, she realized the evil nature and immorality of The Horde. After coming to this this realization, Adora deserted. Catra didn't want to join her and blamed her for "leaving" her. The Fright Zone, now officially led by Force-Captain Catra, under Lord Hordak, declared war on the Princesses Alliance and She-Ra to gain power over Etheria.

In the epilogue of the series finale, most inhabitants left the Fright Zone.

The Fright Zone as seen from a distance

The structures of the Fright Zone appear mangled and twisted

Adora contemplates her future while overlooking the Fright Zone

Fright Zone as it appeared in the episode Light Spinner 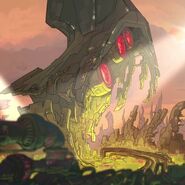