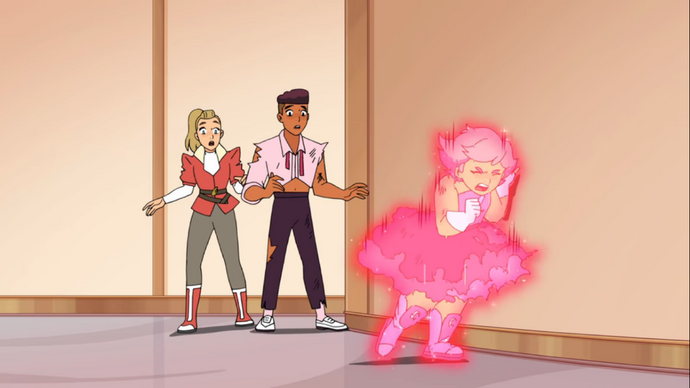 No Princess Left Behind
Promise
The Beacon is the tenth episode of Season One of She-Ra and the Princesses of Power. It was released on Netflix with the rest of the first season on November 13, 2018.

Everyone blames themselves for Entrapta's loss, but they're wrong about what happened. Glimmer tries to hide the glitches in her powers from her mom.

Upon returning to Bright Moon from the rescue mission to the Fright Zone, the princesses dissolved the Princess Alliance and returned to their respective kingdoms. Mermista summarized everyone's concerns when she says that she can't risk her kingdom or anyone else's life by staying with The Rebellion. It was the lowest that the heroes had ever been.

The Trio returned to Bright Moon and tried to pretend that Glimmer was not glitching, or suffering from Shadow Weaver's torture. Glimmer tried to fix her glitching by recharging with the Moonstone, but the recharging seemed to make things worse.

In the Fright Zone, Hordak rebuked Shadow Weaver, Catra and Scorpia for hiding that Adora was She-Ra and for “inviting an attack” by capturing Glimmer and Bow. Catra and Scorpia found and captured Entrapta, who'd been hiding in the vents. Catra tricked Entrapta into helping them by telling her that the Princesses had abandoned her. Then Entrapta acquainted Emily and Catra while introducing the idea of using First Ones' tech to improve the Horde's systems. Entrapta also revealed knowledge of a cache of First Ones' tech in The Whispering Woods.

She-Ra tried and failed to fix Glimmer's glitching by using the Sword of Protection. She-Ra then traveled to The Beacon, where Madame Razz had taken her previously.

During dinner, Angella found out about Glimmer's glitching and revealed that she was the one who ordered Micah to battle, where he died.

Retrieved from "https://she-raandtheprincessesofpower.fandom.com/wiki/The_Beacon?oldid=46065"
Community content is available under CC-BY-SA unless otherwise noted.