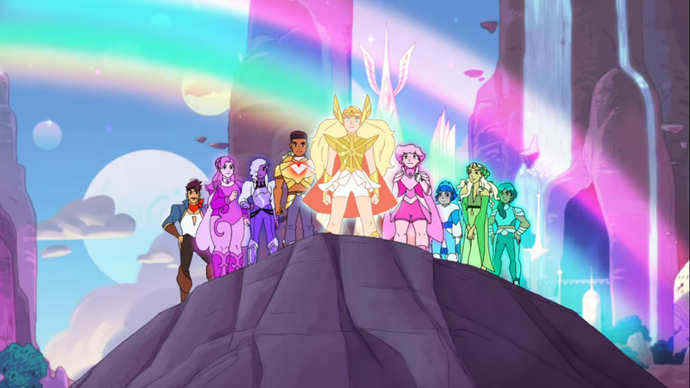 The Battle of Bright Moon

The Battle of Bright Moon

Light Hope
The Frozen Forest
The Battle of Bright Moon (episode) is the thirteenth and final episode of Season One from She-Ra and the Princesses of Power.

It was released on Netflix with the rest of Season One on November 13, 2018.

Entrapta's plan to draw power from the Black Garnet by drawing power from the other runestones allows Catra and Scorpia to attack Bright Moon, but Adora and her friends are ready to fight back.

With Glimmer's connection to The Moonstone damaged, causing her to glitch and the Black Garnet disrupting the other Runestone's connections with each other; the Horde army assaulted Bright Moon.

Queen Angella tried to keep The Moonstone safe while She-Ra, Glimmer, Bow, Netossa, and Spinnerella lead the defense of the Kingdom. Using new weapons developed by Entrapta, the Horde forces led by Catra and Scorpia look set to conquer the kingdom until reinforcements arrive in the shape of Frosta, Perfuma, Mermista, and Sea Hawk who turn the tide of battle and save Bright Moon.

See: The Battle of Bright Moon/Transcript

Retrieved from "https://she-raandtheprincessesofpower.fandom.com/wiki/The_Battle_of_Bright_Moon_(episode)?oldid=50528"
Community content is available under CC-BY-SA unless otherwise noted.