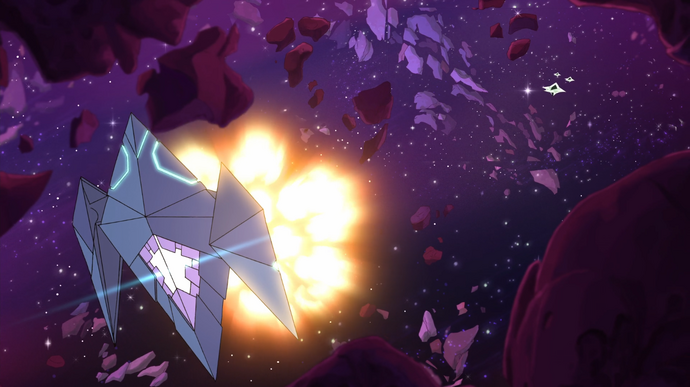 Save the Cat
Perils of Peekablue
Taking Control is the sixth episode of Season Five and forty fifth episode overall of She-Ra and the Princesses of Power. It was released on Netflix with the rest of the fifth season on May 15, 2020.

The team tries to keep the ship working and evade Horde Prime's pursuit. On Etheria, Micah struggles to relate to Frosta during a mission to Elberon.

While Entrapta continued repairs on Darla with the help of Wrong Hordak, Adora continued to fret over the sleeping Catra. When Bow asked how Adora summoned She-Ra Adora answered that she didn't really know, but that she'd been there all along, waiting to come out. While traveling at 30% speed due to the damage to the ship, three of Prime's space bots detected Darla and began to peruse. Catra and Adora sparred over what to do next, Catra refused all help, especially from Entrapta. She asked to be dropped off at the next habitable planet and left there.

On Etheria, Micah tried to befriend Frosta but called her "kiddo" which offended the ruler of the Kingdom of Snows. He turned to Spinnerella and Netossa for advice, but the news that the Horde was spotted near Elberon captured their attention. Frosta, Micah, Swift Wind, Netossa and Spinnerella went to check things out. When they arrived all the villagers were inside and acting really weird. Netossa chided Spinnerella for leaving her alone at the "party" and Spinnerella complained that "something weird" just happened to her. The villagers then closed the doors and strongly suggested the hero's stay and wait for the honored guest, Horde Prime. Then the villagers attacked their eyes turning green, revealing that they've been chipped in the same way Catra was.

Darla detected Prime's bot ships, Entrapta said the safest thing to do was fly through a nearby asteroid field. Adora gave the go-ahead and Bow reluctantly piloted the ship using a previously unseen user interface. Even though the went into the asteroid field Prime's ships found them and opened fire. Adora realized that the bots were tracking Catra's chip; she took Entrapta to Catra's room to remove her chip. Catra resisted but Adora told her they were going to remove the chip, no other options available. She then said that after that she'd be willing to drop off Catra wherever she wanted to go. Catra then relented, as long as Adora stayed with her during the operation. Catra asked for a moment to use the chip to see into Prime's mind and discover his plans, Adora agreed. Catra succeed and found out that Prime is putting chips on all the Etherians he can.

Adora summoned She-Ra and exited the ship to fight the bots in space. At the same time Swift Wind was empowered by his connection to She-Ra and knocked out the villagers with a flash of blinding light he created. Adora leaped from asteroid to asteroid destroying Prime's bots and their ships while Entrapta removed Catra's chip. Catra tearfully thanked Entrapta and apologized for her multitude offences; Entrapta forgave her without a thought. Glimmer and Wrong Hordak brought dumplings that they baked. Meekly, Catra joined them. Bow and Glimmer scooch aside to make a spot for her much to her surprise. As they eat Adora smiles at Catra and she smiles back.

On Etheria, Micah and Frosta are finally on friendly terms (but Frosta tells Micah not to try so hard). Micah tells his comrades that they need to figure out what they encountered and how to stop, while Swift Wind say he fells that She-Ra is coming closer every day. Netossa tells her fellow rebels that they don't know who to trust now but they will get trough it as long as they stick together. Unknown to the rest, Spinnerella was chipped by the villagers at Elberon.

Retrieved from "https://she-raandtheprincessesofpower.fandom.com/wiki/Taking_Control?oldid=48521"
Community content is available under CC-BY-SA unless otherwise noted.