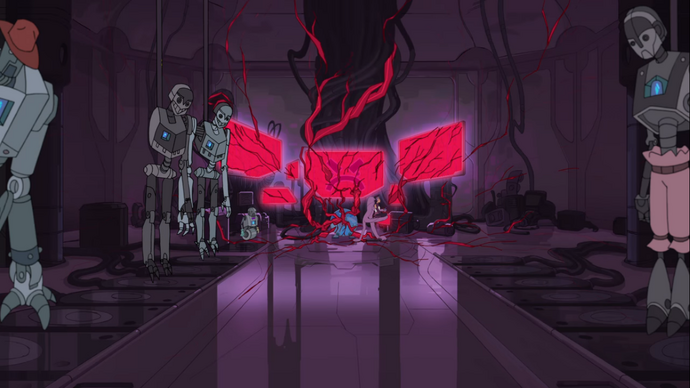 The Sea Gate
In the Shadows of Mystacor
System Failure is the sixth episode of Season One of She-Ra and the Princesses of Power. It was released on Netflix with the rest of the first season on November 13, 2018.

A recruitment trip to Dryl goes awry thanks to a virus that corrupts Princess Entrapta's robots. But when Adora's sword gets infected, wayward machines aren’t the only things they have to worry about.

Lightning flashes in front of the Crypto Castle. A baker drops a dollop of icing onto a tiny pig cupcake while a shadowy figure lurks behind her. Another lightning strike caused her to panic, and another worker came to help her clean. They are both surprised when a third worker put a drink on the tray the baker prepared. He clapped his hands, and a robot dropped from the ceiling, grabbing the tray.

It delivers the food and drink to Entrapta, who uses her prehensile hair to eat and drink. She is interacting with a First Ones' artifact, a Data Disk, using a fancy computer. She recorded a video message, appearing to be documenting her findings, saying this could contain the secrets of the First Ones. Red vines started growing out of the artifact, covering Entrapta's computer and turning the screens red. This sent out a blast and activated an alarm on top of the castle. Her robots' eyes turned red, and they started surrounding Entrapta. Entrapta exclaimed that the robots are responding to her code. The delivery robot broke her trash can, and threw it at Entrapta as she mused about making modern and ancient technology compatible. As a mass of robots gathered in front of her, she announced in her log that she is now going to run.

The scene changes to Adora, Glimmer, and Bow travelling towards Dryl to recruit Entrapta to the Princess Alliance|the Princess Alliance]]. Upon arriving to Dryl they saw the distress beacon, and She-Ra tripped over one of Entrapta's traps but evaded it. There was some loud banging and one of the residents told them to get out of the square, they were attacked by one of the infected bots. Glimmer and She-Ra fell into one of the traps, but Glimmer teleported them out. At the same time Bow was rescued by the three people working in Dryl by taking him to the kitchen. Entrapta introduced herself to Glimmer and She-Ra.

Entrapta activated her giant cleaning bot with a hand clap, but then it attacked them. She-Ra destroyed the bot and when the Sword of Protection touched the infected bot the infection traveled to the sword and caused She-Ra to go berserk. Glimmer wrestled the sword from She-Ra who transformed back to Adora, leaving Adora in a stupor. They went to the lab but could not get in since the door locked Entrapta out and booby-trapped itself.

Baker, Soda Pop and Busgirl, and Bow defended the kitchen from the bots, which Bow's Tracker Pad attracted by making noise. They then made their way through Dryl and fought many bots. When the staff grew fearful Bow gave a rousing speech, recruiting them into The Rebellion. All the heroes met up and fought off many, many bots together in the halls of Dryl.

The six heroes got into the lab, where the disk had built up a protective barrier and began powering itself. Bow shot the disk with his sonic arrow and the bots responded to the loud noise by attacking the arrow; the bots broke the disk while assaulting the arrow. This uninfected all the bots, the Sword of Protection, and Adora.

Entrapta and the kitchen staff joined The Rebellion, and Entrapta set upon fixing the Data Disk while the Best Friends Squad returned home.

Retrieved from "https://she-raandtheprincessesofpower.fandom.com/wiki/System_Failure?oldid=53255"
Community content is available under CC-BY-SA unless otherwise noted.