She-Ra and the Princesses of Power Wiki
Register
Don't have an account?
Sign In
in: Episodes, Season 5 Episodes, Episodes that focus on Adora,
and 4 more 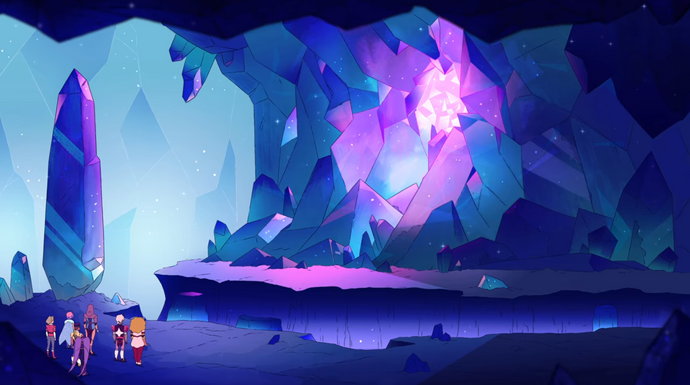 Corridors
Save the Cat
Stranded is the forth episode of Season Five and forty-third episode overall of She-Ra and the Princesses of Power. It was released on Netflix with the rest of the fifth season on May 15, 2020.

Forced to land on a desolate planet to replenish their ship's fuel crystals, Adora meets three siblings stranded and on the run from Horde Prime.

Aboard Darla, Mara's ship, Adora is surprised that Catra saved Glimmer's life. Glimmer told her that Catra wanted to do one good thing in her life. She apologized to Adora for activating the Heart of Etheria and for being so cruel to Bow and Adora but Bow couldn't hear because he left to check on Entrapta while the ship was malfunctioning due to the lack of fuel. Darla discovered the crystals needed for fuel on a nearby planet. First they had to navigate a dangerous asteroid field and survive the dense atmosphere.

On Etheria, Scorpia joined Swift Wind's night's watch. They shared a few friend moments, Scorpia let slip that Kyle had a crush on Rogelio, but that she's really good with secrets. Swifty told her that he's been trying every night to access his sacred bond with Adora, but to no avail.

After landing on the alien planet the team learns that it was a victim of Prime's army after finding one of his spires there. Bow lashed out at Glimmer for activating the Heart of Etheria. Entrapta stayed on board Darla while Bow, Glimmer and Adora looked for the crystals. The ground collapsed under Adora and she fell into a crystalline cavern replete with blue crystals. The Star Siblings then attacked Adora without warning, and they were hitting each other, but stopped when they finally figured out that they were all on the same side. Starla shared her food

with Adora and introduced her sister, Tallstar, her brother, Jewelstar and her owl, Glory. The Siblings revealed that they are after the same thulite crystals that Adora is looking for but the constant earthquakes have blocked the way. When Bow, Glimmer and Entrapta joined up the whole gang pressed on to get the thulite. Everyone worked together, learned to trust a bit more and got the thulite. During a tremor Adora summoned She-Ra to save them from a collapse, which Swift Wind felt though their sacred bond. Everyone shared the crystals and the Star Siblings vowed to help fight Prime in any way they could. Tallstar said that magic has not been seen in the universe in centuries, which means that Etheria is one the last of the planets with magic on it.

Then Glimmer apologized to Bow, showing how to say sorry to someone you've wronged. She owned her mistakes, accepted the consequences of her mistakes, promised to keep working at their friendship and gave Bow all the time he needed to forgive her. Adora then asked to go back and save the cat; Bow and Glimmer agreed to save Catra "Best Friends Style".