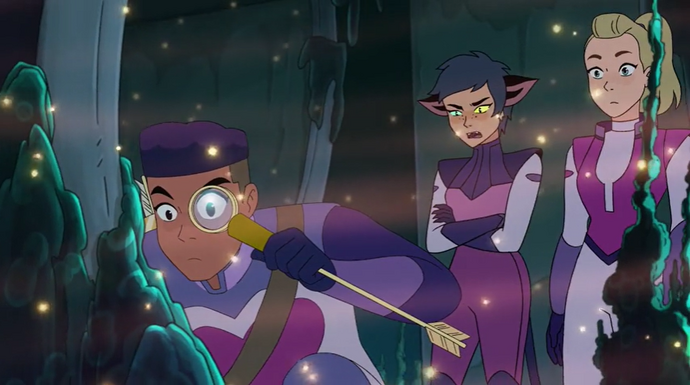 Shot in the Dark

Shot in the Dark

Perils of Peekablue
An Ill Wind
Shot in the Dark is the eighth episode of Season Five and forty seventh episode overall of She-Ra and the Princesses of Power. It was released on Netflix with the rest of the fifth season on May 15, 2020.

The heroes try to return home while avoiding detection from Horde Prime's blockade. The crew finds an unexpected new ally who might just be able to pull it off.

As the crew aboard Darla, approach Etheria they see the massive blockade. Bow asked Catra if Prime had a weakness, Wrong Hordak responded by saying, "You are correct brother, we do not discuss Horde Prime's weakness." Which led to Wrong Hordak mentioning Krytis, which he insists does not exist. Catra remembered that planet from her time being chipped. After Darla confirmed the planet's existence and location Adora ordered the crew to investigate.

Once on the planet the crew disembarked with everyone in space suits except Wrong Hordak. They entered a spire abandoned by Prime. And when Entrapta found a clone recharging chamber she plugged Wrong Hordak in, without asking his permission. She declared the atmosphere safe and removed her helmet, as did the rest. She detected a life form and everyone barged into the rickety spire to contact an unknown person in the vague hope they can help defeat Prime.

At the whats left of the rebel base Sea Hawk, Swift Wind, Perfuma, Frosta and Netossa encountered Castaspella. Frosta captured her in ice and made sure she wasn't chipped. Shadow Weaver revealed that Mystacor was under Micah's control. They all joined together and went to find a new hiding place. Shadow Weaver insisted that Castaspella follow her; Castaspella refused at first but she reluctantly agreed after Shadow Weaver said she had a plan. As they walked Castaspella told and Shadow Weaver to slow down but she told her to keep up. When Castaspella was about to turn back,Shadow Weaver pointed out that Micah is the strongest sorcerer on Etheria and now that he was under Prime's control he was a dangerous obstacle for the rebellion, so Castaspella resumed following Shadow Weaver as she said her plan will make them stronger.

On Krytis, Wrong Hordak began to receive information that contradicted previous things he believed, due to his programming, which led him to an emotional crisis. Catra, Bow, Glimmer and Adora began searching the abandoned spire, growing more and more wary as the pressed on. While arguing with Bow over how cute she is she put her hand through a wall, activating the internal defenses. After escaping spikes that shot out of the walls, Entrapta told them the being they were looking for was close by. She also found out from Wrong Hordak that the planet was once a First One's colony, just like Etheria. And that something on the planet drove Prime away after he defeated the First Ones. The then found out that someone, who sounded like Entrapta, sent them to an ever lengthening corridor. Then the native of the planet revealed themself. Everyone freaked out and Catra tackled the stranger, and fell through the floor with them. Bow, Glimmer and Adora got trapped by the defense systems as they rushed to save Catra. Glimmer found out the spikes were illusions and she dispensed with them using her magic. As Catra cowered before the stranger she began to bond with them, they even mimicked Catra's sneeze. Glimmer used a location spell and joined Catra who learned that the stranger, who had taken a cat form, responds to emotions. The stranger began talking to Catra and told her that their name is Melog. Actually, their humanoid appearance was just Shape-shifting and their true appearance is that of a big feline.

Melog told Catra that the First Ones stole the planets magic leaving them helpless before Prime, who destroyed the planet. While Prime did destroy the planet he could not end it's magic and so he fled, covering up his failure. Melog agreed to join Adora and the crew, go to Etheria and defeat Prime. There was still the problem of the blockade around the Etheria; fortunately Catra revels she has a plan

On Etheria, the two sorceresses arrived at their destination where a group of mysterious beasts seemed to be some sort of hibernation and been so for a long time as moss had grown on their bodies. Shadow Weaver told Castaspella that the First Ones did not enhance Etheria, they depleted its magic, weakening it. And that the magic of Etheria is waiting to be freed. She proposed releasing the magic by bypassing the Heart of Etheria and use the magic to defeat Prime. Castaspella believed that Shadow Weaver wanted the magic for her selfish use. Shadow Weaver asked Castaspella to go with her, and stop her if she tried to steal the magic. Reluctantly, Castaspella agreed.

Mara's Ship and its crew approached Etheria and the blockade, Melog used their magic to render the ship invisible. They successfully ran the blockade undetected. Glimmer kissed Catra on the cheek and declared her the Savior of the day. Bow then hugged Catra, and Glimmer did the same, which Catra was very annoyed with. As the hatch opened the crew looked over Etheria as Adora is overjoyed to finally be home.

See: Shot in the Dark/Transcript

Retrieved from "https://she-raandtheprincessesofpower.fandom.com/wiki/Shot_in_the_Dark?oldid=50953"
Community content is available under CC-BY-SA unless otherwise noted.