She-Ra and the Princesses of Power

View source
watch 01:55
Cobra Kai Season 4 - The Loop
Do you like this video?
Play Sound

She-Ra and the Princesses of Power

November 13, 2018
She-Ra and the Princesses of Power is an American animated science fantasy action adventure series developed by Noelle Stevenson and produced by DreamWorks Animation. It is a reboot from the Filmation animated series, She-Ra: Princess of Power. It is part of the Netflix Original Series brand.

Season 5 started streaming on Netflix on May 15, 2020; this is the final season of the show.

The DVD for seasons 1 - 3 of She-Ra and the Princesses of Power were released available in December 3, 2019, on Amazon.

They can be found here

An orphan named Adora leaves behind her former life in the evil Horde when she discovers a magic sword that transforms her into the mythical warrior princess She-Ra. Along the way, she finds a new family in The Rebellion as she unites a group of magical Princesses in the ultimate fight against evil.

From Eisner Award-winning author and executive producer Noelle Stevenson ... comes a modern take on the '80s girl power icon for a new generation of young fans. The trailblazing property originally debuted in 1985 to satisfy overwhelming demand for a female lead fantasy series. With Stevenson's unique voice at the helm, fans are in store for an epic and timely tale that celebrates female friendship and empowerment, lead by a warrior princess tailor made for today. The series will be available to Netflix members worldwide in 2018.[1]

Every episode of Season One begins with the red Netflix logo on a white background. We then see outer space, and the words "A Netflix Original Series" appear, with Netflix in rainbow colors. We then see a First Ones engraving with a picture of Adora. The words "Best Friends Squad" are written in Etherian in the top right. Then "DreamWorks She-Ra and the Princesses of Power" appears. In Season Two, the only thing that changes is the Netflix logo. It shows a red 'N' in a black background, which zooms in until there are only thin lines left. 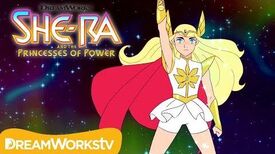 She-Ra and the Princesses of Power Teaser Trailer 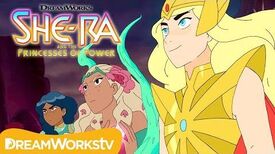 She-Ra and the Princesses of Power Season 1 Trailer