"Destiny Part 2"
Season Four is the fourth season of She-Ra and the Princesses of Power. Its release date was November 5, 2019.[1]

Season Four begins with the respective rises of Queen Glimmer as leader of The Rebellion and Catra as co-leader of the Horde. As the Horde makes advances on The Rebellion under the looming threat of Horde Prime's arrival, the Princess Alliance makes heroic strides. Conflict arises when the Rebellion begin to disagree on the best way to defend Etheria. Ultimately, a shocking discovery about Etheria itself causes Adora to reconsider everything she thought she knew.

This season introduced Double Trouble from the 80s toy line, a character which didn't appear in the first series. Instead of being Glimmer's cousin who is part of The Rebellion, Double Trouble is part of the Horde and is a green, non-binary, elven-appearing, shapeshifting mercenary. Catra has brought them on for protection and counsel.

In a season where relationships and power dynamics are in constant flux, the cast gave a sneak peek inside other pieces of the season including new character designs for Glimmer and Catra, Lauren Ash shared a clip from an episode focused on Scorpia, and Stevenson teased that there's a special episode called "Boys' Night Out" that includes a couple musical numbers.

Season 4 Trailer SHE-RA AND THE PRINCESSES OF POWER

One of the Netflix Originals Titlecards displayed after Season 4

Adora, Glimmer, and Bow enter the Chamber of Queens

Catra and Hordak oversee the deployment of Horde troops

deer from the Whispering Woods 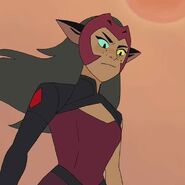 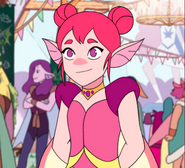 In preparation for Season 4, showrunner ND Stevenson summarized the season with a number of emojis on Twitter, similar to how they did for Season 2 and later for Season 5.