She-Ra and the Princesses of Power Wiki
Register
Don't have an account?
Sign In
in: Episodes, Season 2 Episodes, Episodes that focus on Adora,
and 7 more 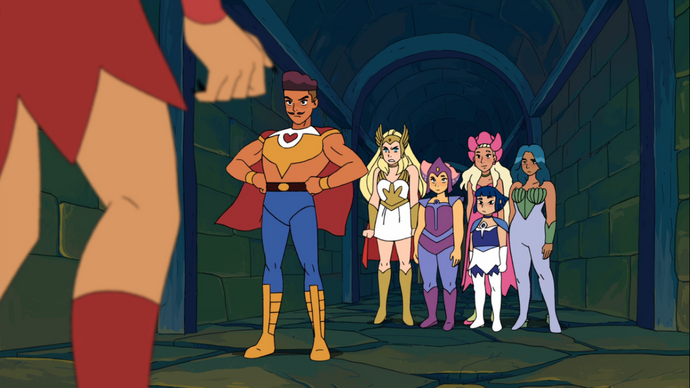 Signals
White Out
Roll With It is the fourth episode of Season Two and seventeenth episode overall of She-Ra and the Princesses of Power. It was released on Netflix with the rest of the second season on April 26, 2019.

The Rebels gather to plan an assault on a Horde occupied tower.

The episode begins with the Best Friends Squad planning an attack on a Horde occupied tower that overlooks a strategic pass. The tower used to be under Rebel control, but the Horde took it over while the Princesses were defending Bright Moon.

During the planning session, Bow uses tiny figures that he made to represent himself, Adora, and Glimmer on the map. Each of them takes a turn to come up with a plan of attack, and their accounting of events is told as part of a fun stylized mini-story.

Adora becomes increasingly frustrated by interruptions from other members of the Princess Alliance, and reluctance by the group to take this planning session as seriously as she wants them to. Adora believes that only a perfect and foolproof plan will result in a successful mission, lamenting that “our plans always fail!"

Glimmer countered this by reminding Adora that “we've gotten really good at improvising!”

While the Alliance was planning their attack, Scorpia was placed in charge of the tower while Catra was away on another mission. Lonnie and Rogelio were in utter disbelief that Catra put Scorpia in charge.

Lonnie activated a Spy Bot to eavesdrop on the princesses while they were making their attack plans. The Spy Bot caught the princesses arguing over which attack plan they should follow, and during the argument Mermista accidentally poured soda-pop on the Spy Bot, causing it to malfunction.

The Princesses continued to argue over who’s plan was best, but Adora was convinced that none of her friends were taking this matter seriously. She became upset and recounted her own prediction of what might happen if they couldn’t come up with a ‘perfect plan’ - which in her mind only resulted in the total defeat of The Princess Alliance at Catra’s hand.

Fortunately, Glimmer reminded the group that they've been in worse situations, “Bad things will happen, that's life... figure out the things you can, and TRUST that your friends have your back for the rest.”

Even though Lonnie and Rogelio aptly prepared the tower and reassured Scorpia that things were under control, the Horde was not able to hold off the attack by The Rebellion which decisively overtook the tower by working together and improvising.

The Rebels celebrated as the Horde retreated - Scorpia, Lonnie, and Rogelio voted unanimously to blame poor Kyle for their defeat.