She-Ra and the Princesses of Power Wiki
Register
Don't have an account?
Sign In
Advertisement
in: Episodes, Season 2 Episodes, Episodes that focus on Adora,
and 6 more

View source
watch 01:33
Wiki Targeted (Entertainment)
Do you like this video?
Play Sound 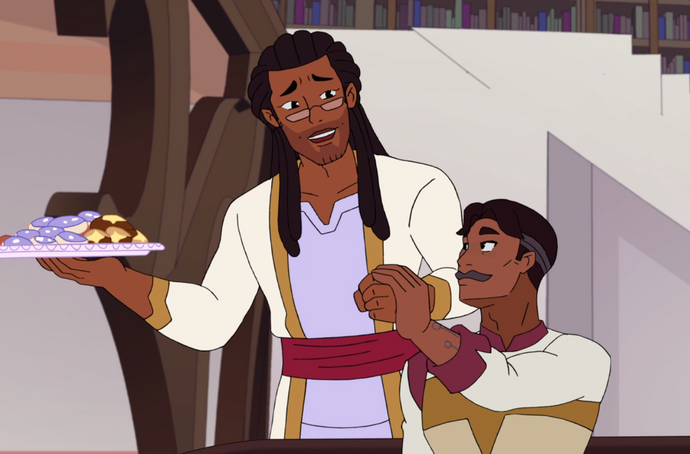 Light Spinner
The Price of Power
Reunion is the seventh episode of Season Two and twentieth episode overall of She-Ra and the Princesses of Power.

Catra searches for Shadow Weaver - Adora and Glimmer follow Bow to a mysterious library and learn that he hasn’t been truthful about his past.

Bow reads the words Serenia, Portal, and Mara written in First Ones writing. While trying to determine what the mysterious message means, Bow leaves Bright Moon, taking his weapons, and seeks out The Library that is curated by his fathers George and Lance. Adora and Glimmer find a note he left that says "I'm fine. Don't follow me." Suspicion rises, and Glimmer urges that she and Adora go against the note’s request when she sees that he had left his trick arrows behind, believing him to be in danger. Glimmer doesn't know where he went, because, she reveals, he values his privacy and never talks about his past, despite their prolonged friendship.

Adora and Glimmer track him down from broken twigs, the sap and his “incredibly distinct footprints”, and stumble across a mysterious library in the middle of the Whispering Woods. They enter, cautious and wary, and find Bow, immediately becoming alertly defensive, trying to protect him from a nonexistent threat. Bow is surprised and tells them to leave immediately.

Two men appear and Bow reluctantly lets his friends know of their relation to him. George and Lance are ecstatic to finally be meeting Bow's "school friends”. Glimmer and Adora are visibly confused but Bow tells them to simply play along.

Meanwhile, in the Horde, Catra works fervently, wanting patrols doubled and all reports brought directly to her in an attempt to hide her mistake of letting Shadow Weaver escape, she blatantly denies the fact when it is brought up. She is also cruelly harsh to her team, threatening Lonnie, who, Scorpia points out, was merely answering her question.

In the Library, they find out that Bow has been pretending to attend the "Academy of Historic Enterprises" with his friends, but since the the war against the Horde started, he decided instead to become an freedom fighter working in secret. He is the youngest of thirteen, expected to take over his fathers' library when he graduates. George and Lance are being very hospitable, offering snacks to Glimmer and Adora. Thinking that, as attendees of the Academy, Glimmer and Adora would be interested in history, so they give them a tour of the Library.

Along they way, they reveal that they don't want to affiliate to themselves with the Rebellion because the war left George's village to ashes the last time he joined. Bow later leads them to his room, where he explains how he lied and that he said in his letters that Glimmer is a physics major, Adora's an art major, nobody is a Princess or has magical powers, and they all met freshmen year. Bow says he can look for information about the Mara message since the place has a huge collection of artifacts and First Ones' writing. Adora is optimistic about this and Glimmer is not.

In the Fright Zone, Scorpia tried to comfort Catra, saying that everything in the Fright Zone is suspicious anyway. Catra rebuffs that she should spend more time following orders and less time questioning them. When she attempts to further coax her friends, Catra bursts out that she “lost Shadow Weaver”. Scorpia is immediately worried for her friend, and suggests working with Entrapta; Catra shuts down the idea, as she is afraid that Entrapta will tell on her to Hordak. Scorpia agrees to work with her, just the two of them. However, Imp is watching in a vent above, catching their whole conversation.

In the library, Adora and Glimmer are having trouble dodge questions about the "academy," as they see more of the library. It is revealed that Serenia was the name of a mythical First Ones' hero and that they have tons of information on her. So much research could take a long time... Adora reveals that George's tattoo actually says "lunch" in First Ones' writing rather than "love" which he intended for it to.

Glimmer feels deceived that Bow had this entire life that he never told him about. Bow reveals that his life at home was his fake life. Glimmer encourages Bow to come clean with the truth to his parents. In a different part of the library, Lance shows Adora an elemental which was found in the same dig site as the runestone shard. Thing is, George and Lance can't agree on what it is. They ask Adora about it, who replies that it says the password is "Eternia." When she says that, it lights up. They are excited that it works, but it releases a monster robot.

Following this accidental activation of a First Ones' monster robot elemental in George and Lance's collection, Adora transforms into She-Ra, which blows Bow's cover story. Glimmer fights the monster with magic, and Bow with his arrows, leaving George and Lance gaping in confusion. Bow pacifies the robot, saying he has dealt with this before and knowing that it wants to retrieve a stolen item, which Lance suggests is the runestone shard. The monster calms down after it obtains what it came for. After witnessing his dedication, and a clear explanation, Bow's fathers give him their approval of his fighting in the Rebellion, saying they will support his decisions. George and Lance subsequently decode the message as a star constellation bearing the name Serenia which will soon appear above the Crimson Waste. The trio also learns that First Ones used stars to navigate space using constellations named after mythical heroes, one of whom was named Serenia. The constellation Serenia only appeared in summer over the Crimson Waste, a no-man's-land, a giant lifeless desert. On one's ever made it that far and come back alive. The trio decide they must head to there.

In The Fright Zone, Catra desperately tries to track down the fugitive Shadow Weaver. She arrives in Hordak's Sanctum, who wanted to touch base on her. She claims that all is running smoothly and directly lies that Shadow Weaver was sent to Beast Island. Thanks to Imp's recording of her earlier conversation with Scorpia, Hordak finds out about the escape and unveils that inviting her there was giving her a final chance to admit her failure. A machine powers up and releases toxic gas, choking Catra as a punishment. Hordak continues to elaborate on her failure.