She-Ra and the Princesses of Power Wiki
Register
Don't have an account?
Sign In
Advertisement
in: Episodes, Season 5 Episodes, Episodes that focus on Netossa,
and 5 more 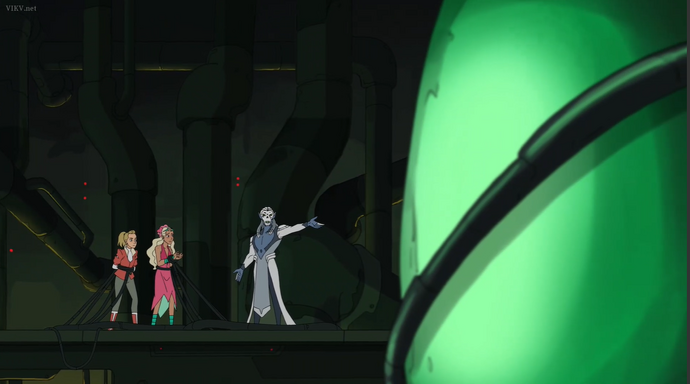 An Ill Wind
Failsafe
Return to the Fright Zone is the tenth episode of Season Five and forty-ninth episode overall of She-Ra and the Princesses of Power. It was released on Netflix with the rest of the fifth season on May 15, 2020.

The Princesses search for Scorpia while Glimmer and Bow attempt to find George and Lance.

Inside the rebel base, Adora led a planning session on how to stop the chipped Princesses. Netossa revealed everyone's weaknesses in an effort to do that. They lost track of Spinnerella but found out that Scorpia had returned to the Fright Zone. Catra pointed out the best way to save their friends is to first damage the chip. Adora made a plan to sneak into Scorpia's home. Glimmer and Bow agreed to check up on his dads as Bow was really worried about them. Netossa, Perfuma, Adora, Catra sneaked into the Fright Zone, cloaked by Melog. Perfuma walked in calling out to Scorpia, forgetting what stealth means. This got her attention and she attacked her friends. Catra got separated from the group and Mermista attacked her. Then Spinnerella joined Scorpia and attacked.

Glimmer and Bow teleported to the Library, which was trashed and abandoned. Glimmer found a note left by Lance and George telling Bow where they went to hide. Glimmer transported herself and Bow to the ruins where they were hiding.

As the Princesses fought in the Fright Zone Scorpia forced Adora and Perfuma into Hordak's throne room that Prime had taken over and remade in his image. Scorpia bound the two Princesses while Prime explained that he had to come and see Etheria for himself. He revealed that he no longer needed She-Ra to activate the Heart of Etheria; building upon Hordak's research and his personal knowledge of the First Ones he said that he could access the Heart on his own.

Within some First Ones ruins, George and Lance discovered writings about an ancient rebellion against the First Ones, the Friends of Mara. They found a recording left by Serenia, one of Mara's fellow rebels, that explains about the fail-safe for the Heart of Etheria, that could destroy the Heart. The fail-safe is at the Arxia outpost. While learning this Catra called Bow on a communications pad from within the Fright Zone as she was being drowned by Mermista. Upon hearing this Glimmer teleported to the Fright Zone. Horde Prime ordered Scorpia to end Adora and Perfuma, and she powered up her lightning and devastated the platform that Adora and Perfuma were on. But that only released the Princesses and angered Prime.

On the roof, Netossa broke Spinnerella's ankle and damaged her chip, rendering her unconscious. Glimmer teleported to Netossa's location and brought the pair back to their base, joining Catra and the rest. Catra and Perfuma bonded while talking about their mutual friend, Scorpia. Bow and Glimmer told the crew about the fail-safe, Shadow Weaver and Castaspella revealed that Arxia is Mystacor.

See: Return to the Fright Zone/Transcript