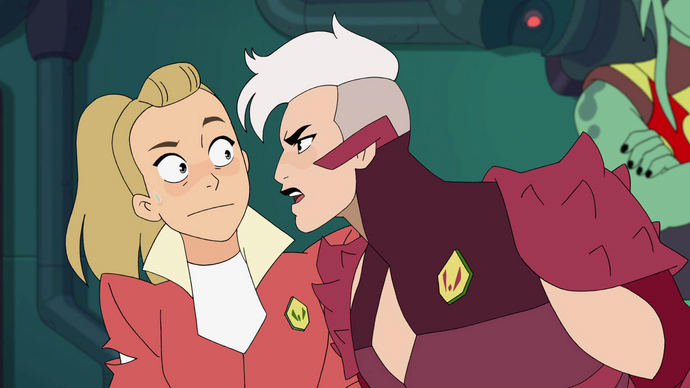 Force Captain Adora wakes up in the Fright Zone alongside her best friend Catra. She's convinced something's wrong, but only Scorpia seems to agree.

Adora awakes in her bunk in the Fright Zone with Catra, seemingly before most of the prior events of She-Ra and the Princesses of Power occurred. Although she has some memory problems, Catra assures her that all is well and Adora moves on. Adora is unnerved to see her fellow Horde soldiers cheering her, over her apparent successful execution of the invasion of Thaymor. It takes some time for her to remember partaking in it, despite Catra saying she is the "hero of the hour." Catra takes her to the locker rooms where her squad-mates have taken enough of Kyle's rations to build a cake out of it for Adora, Catra's idea, which Adora appreciates.

The group begin rough housing making Kyle drop the cake. As it lands, Adora sees the word "Mara" etched into the cake, if only for a second, which unnerves her. Shadow Weaver then arrives, wipes off their faces, and tells them to stop playing games; but good-naturedly, unusual for Shadow Weaver. Shadow Weaver walks with Adora, saying that Hordak is impressed, has awarded her a new mission, and that everything is "perfect." Adora however begins seeing flashbacks, such as of Madame Razz walking along through the reflection of a glass pane.

Adora snaps herself out of it and attends a briefing with Scorpia, who takes an instant disliking to Adora for reasons she cannot adequately describe. Grizzlor and Octavia are present, high-fiving Adora for her perfect execution of the mission in Thaymor. The sergeant then continues with a briefing on the mission in one weeks' time; the Salineas sea gate, the next target in order to branch out into rebel-controlled waters, but Adora receives a note that once again has the word "Mara" on it. As the sergeant shows pictures of Angella and Mermista, Adora has flashbacks to her time as She-Ra and cries out. When she looks up, the "screen" the sergeant had been working on and displaying images with has suddenly vanished, and the sergeant says there was no screen.

Adora begins to have a meltdown and runs off, memories flashing before her eyes until she reaches a blinding light at the end of a hallways that quickly vanishes, starkly reminiscent of the portal from Moment of Truth. It then appears again, surging toward Adora, until vanishing a second time. Adora then shows off the note with the word "Mara" on it to Catra, but all that's there is a blank piece of paper. Adora begins babbling about something she needs to remember until Catra slaps her, freaked out by Adora's hysteria, and Catra takes her to get some air. Adora begins to protest, but halfway through her protestation she suddenly finds herself on top of a building, unknowing of how she got there even though Catra assures her they climbed up like normal.

Catra talks about ruling the world together like they always wanted, but Adora isn't certain that's what she wants, plagued by visions of lightning that only she can see in the distance. Lonnie and Rogelio then arrive, saying they have big news, and again Adora ends up at her destination (next to them) without remembering actually traveling the distance to get there. They say they are being deployed to Salineas, saying it has already been a week when Adora does not remember the time passing. She begins babbling about how time and space are disjointed, struggling to remember the past as memories flood her mind. Catra tries in vain to get Adora to stop, from orders to reassurances that all is well, but nothing assuages Adora and she continues to search for memories until she realizes that Scorpia has not been affected. She then runs after her.

Adora accosts Scorpia, and the latter begins to be freaked out by Adora's rambling to the point where she prepares to sting Adora with her tail until Adora mentions Catra's name. At the name, Scorpia begins to remember too. She also begins to freak out, asking how they managed to get where they are, until Adora reiterates that they can find out in Hordak's lab because that's where all her memories stop. At that instant they suddenly find themselves standing outside Hordak's sanctum, Scorpia amazed at how they managed to get there without traversing the intervening space. Adora tells her to roll with it and help her get past the guards, but Scorpia notes that it is a horrible plan, and the two begin to bicker until they bumble into sight of the guards. The guards rush forward to arrest them, but time flashes again and suddenly the soldiers are lying incapacitated upon the ground; apparently stung by Scorpia, to her horror.

They turn to the door only to find a blank wall, Adora noting that it is "getting worse". Adora then follows after a blur that looks like Razz, Scorpia following simply because she has no other option. They both make it into the sanctum, hoping to find the portal Adora barely remembers, but nothing is there. Adora begins analyzing her memories, discovering that there was "a sword" which Catra took, but Hordak enters and they must hide. They nearly make it undetected, but Imp finds them and forces them to flee. As they do, the light follows them, eventually enveloping Scorpia until she is gone.

Adora flees from the light, following Razz until finally catching up with her. Razz tells Adora that things can still be fixed, and to "find me in the woods dearie". Adora races away, finding Lonnie and running with her, but when she makes it within a room she discovers Lonnie not with her. She rushes to find Catra, who still doesn't believe Adora even though her own memories begin to surface, so Adora knocks her out and races away from the disintegrating Fright Zone on a skiff. Catra wakes up and crashes the skiff in the woods, all the while Adora begs Catra to listen to her, saying she won't lost Catra again.

As the light encroaches on the forest, Adora continues to plead with Catra, but she remembers enough of her old memories to start attacking Adora. Adora points at the light disintegrating reality around them, saying the whole world could collapse if they don't fix it, but Catra doesn't care. She says she won't let Adora win, that she'd rather see the whole world end than let that happen. The ground then disintegrates beneath Catra's feet, but rather than grab onto Adora, she lets herself fall into the light and be erased than accept Adora's help.

Adora runs into the woods, crying, until Razz shows up. She says this happened with Mara, that Adora could still save the world as Mara did if Adora recovers her sword; by going back to the beginning, not to Hordak's sanctuary, but the "very" beginning. Although Adora doesn't understand, Razz says she doesn't need to, only to remember. Adora looks at her note again, this time saying "She-Ra", and remembers that she must find Bow and Glimmer to get the sword. Razz then walks into the light, and Catra walks out of the light, now corrupted and disfigured.