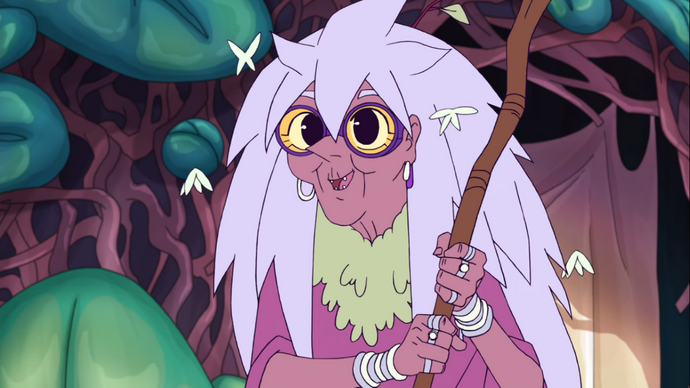 The Sword: Part 2
Flowers for She-Ra
Razz (episode) is the third episode of Season One of She-Ra and the Princesses of Power. It was released on Netflix along with the rest of Season One on November 13, 2018.

Glimmer concocts a plan to introduce Adora to Bright Moon, but it all goes wrong. Adora flees into the woods, where she meets an old woman named Razz.

Glimmer and Bow bring Adora to Bright Moon, despite Adora's unfavorable background. Glimmer has Bow sneak Adora in through the "back way", while she goes to recharge. Before she can go to recharge, however, Glimmer is made to face her mother but collapses before Angella can chew her out. When she wakes, she explains to her mother her and Bows original plan with the First Ones' tech (omitting the part where they ran into a Horde soldier that just so happened to be the reincarnation of She-Ra)

Meanwhile, Bow and Adora are hiding in Glimmer's bedroom, awaiting her to return. Adora is realizing that Bright Moon won't be very accepting of her past, but Bow reassures her that they'll come to love her. Glimmer then sparkles in and tells them that her mothers coming. The two freak out, but Gimmer tells them that as long as Adora transforms into She-Ra before her mom sees that she's Horde, she'll be fine. Glimmer and Bow then leave Adora to transform, seeking to retrieve Angella. Feeling cramped, Adora goes outside and accidentally gives a nearby horse rainbow wings and a unicorn horn. The horse, terrified, runs into the nearby camp, trashes the place, flies off and in turn, due to the heavy flapping of his wings, blows away Adora's pink cloak that was originally covering the Horde symbol on her back and reveals the Horde symbol to the entirety of the camp. She tried to tell the attacking civilians that she wasn't with the Horde anymore but they didn't believe her and continued attacking her. Being attacked by her would-be allies, Adora seeks refuge in the woods. Glimmer and Bow, with Angella in tow, are then informed that a Horde spy with a sword was found on the grounds and attacked their people. Angella then rounds on Glimmer with one of her epic diatribes, "What did you DO!?"

In the Fright Zone, Catra listens to the gossip about the "12 foot tall" princess that took out their entire squad, knowing fully well that it was Adora. She's ridiculed for failing to incapacitate her but argues that she'll take her down when she wants to.

Adora, still in the woods, comes across a strange old woman with a broomstick and butterflies fluttering about her head. This woman seems impaired, as she first calls Adora - Mara. After some convincing, the woman relents that Adora isn't Mara as she isn't quite the same but nevertheless invites her to pick berries with her. Whilst picking, they stumble upon a first one's ruin which lights up in the presence of Adora's sword, turning the sky into stars. They continue their hunt for berries elsewhere.

Catra grows more and more resentful of Adora for leaving her, cries and tears apart her bed in frustration. Shadow Weaver berates her for not bringing Adora back and Catra stands up for herself and argues in Adora's defense, but is quickly knocked down by Shadow Weaver's might.

Razz imparts her wisdom on Adora by walking them into the carnage of a Horde attack, telling her exactly what she needs to hear. Wicked people, the Horde, destroy what they cannot control. The Princesses have stopped trying, they only protect their own kingdom, leaving far too many people at the Horde's mercy. Adora needs to stop waiting for orders like a good soldier and start thinking for herself. This truth, paired with the sudden sound of Horsey in distress, helps Adora finally complete her first autonomous She-Ra transformation. They battle the Horde Soldiers and prevail.

Despite being injured, Adora wakes to Razz and the newly named Swift Wind (Horsey) thanking her for her efforts. Adora decides that it's now her duty to protect the world from the Horde, and takes Swift Wind back to Bright Moon. Adora arrives just in time to show the Queen that she is She-Ra, but she's also a former Horde soldier, and that she cannot change who she had been, only who she will now be. She then convinces Queen Angela to allow her to join the fight to stop the Horde as Queen Angella then dubs her "She Ra: Princess of Power" (Much-to Glimmer and Bow's joy).

Back in the Fright Zone, Shadow Weaver takes a terrified Catra to-face Hordak. Once there, Shadow Weaver tells him about Catra's failure to bring Adora back (with their "Forces Suffered a Humiliating Defeat" instead) and promises him that nothing with stop them from finding her and bringing her back. Hordak refuses, saying that she will elect another Force Captain and resume normal operations. Shadow Weaver attempts to protest by telling-him that Adora is the "Only Viable Candidate" for the title, but Hordak points out Catra and reminds her that she's also her ward. Shadow Weaver compliments that she's been "Nothing but a disappointment" to her, yet Hordak scolds her for not blaming herself if she's failed-to condition her properly. When Shadow Weaver attempts to protest further, Hordak stops her (With Catra covering her hand over her mouth, possibly to stop herself from being sick in front of them) and tells her his decision is final. then he turns to see Catra and tells her to "Rise", naming her "Force Captain Catra" and then gives her the force captains badge. Catra hesitates at first but then realizes what this means and smirks proudly.