She-Ra and the Princesses of Power Wiki
Register
Don't have an account?
Sign In
in: Episodes, Season 4 Episodes, Episodes that focus on Adora,
and 6 more 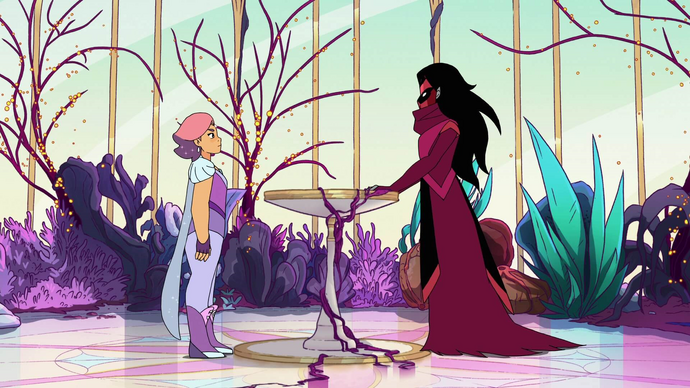 Flutterina
Protocol
Pulse is the fourth episode of Season Four and thirtieth episode overall of She-Ra and the Princesses of Power. It was released on Netflix with the rest of the fourth season on November 5th, 2019.

‘The Squad’ waylays a Horde transport, only to have the tables turn. While Adora hunts down the Horde’s new pulse bots, Glimmer begins to take advice from Shadow Weaver.

Adora, Bow, Spinnerella, Netossa, and several other rebels attack what they think is a Horde transport carrying a special weapon. It turns out to be empty, and when several robots emerge to surround them it becomes clear that it is an ambush. They manage to make it out, but Spinnerella and Netossa are both seriously injured in the process.

At their war camp, Glimmer becomes distraught over the Horde's newfound ability to predict the every move of the Rebellion. Adora sets out to track down the weapon, while Flutterina, who is actually Double Trouble, once again reports their activities to Catra. Shadow Weaver attempts to gain Glimmer's ear, but initially fails until Adora returns with a gravely injured Bow. Adora heals Bow, but Glimmer becomes distraught and believes her General (also Double Trouble in disguise) when she deceitfully suggests that the Horde is tracking Adora. Adora then sets out with Spinnerella and Netossa, and Double Trouble reports to Catra.

Still uneasy about her friends constantly running into ambushes, Glimmer reconsiders Shadow Weaver's counsel and requests her help. Shadow Weaver teaches Glimmer to use a location spell, identifying Catra's location, and advises her to strike while Catra's forces are distracted attacking Adora. Even as Adora, Spinnerella and Netossa become bogged down in yet another ambush, Glimmer teleports to Catra's base and uses her newfound power and recently learned spells from Shadow Weaver to handily defeat her.

Out of options, Catra activates a powerful pulse bot strong enough to level half the woods. Catra then attempts to flee, saying Glimmer would have to choose between the bot and her, but a collapsing strut falls on top of Catra and traps her. Satisfied that she can deal with Catra and the bot, Glimmer teleports the bot into the sky where it detonates harmlessly, but Double Trouble arrives and rescues Catra before Glimmer can return for her.

Glimmer then teleports to Adora's location, where they are beleaguered by numerous pulse bots and protected only by a weakening Netossa. Glimmer quickly dispatches the majority of the bots, with Spinnerella destroying one that nearly detonated in front of them, becoming injured in the process. After Glimmer destroys the final bot, everyone returns to Bright Moon, where Bow and Adora aren't happy that Glimmer used Adora as a decoy.

In the Fright Zone, Catra paid off Double Trouble, who receives a mission to destroy Adora and Glimmer's friendship.