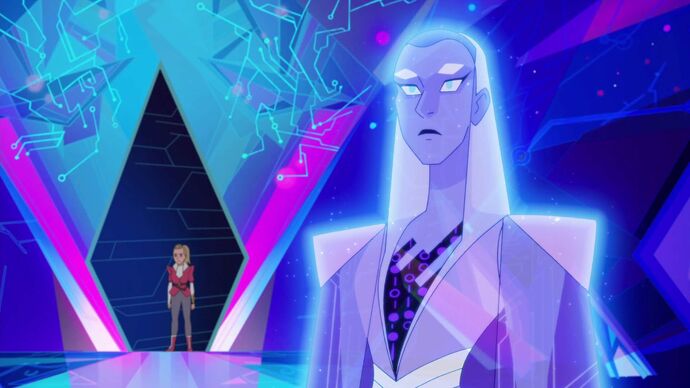 Pulse
Princess Scorpia
Protocol is the fifth episode of Season Four and thirty-first episode overall of She-Ra and the Princesses of Power. It was released on Netflix with the rest of the fourth season on November 5th, 2019.

An unexpected acidic spore storm traps Kyle, Lonnie, and Rogelio together in their transport vehicle as they travel through the Whispering Woods.

Meanwhile, Adora struggles to prevent the Crystal Castle from falling apart while a damaged Light Hope is forced to reboot herself.

Kyle, Lonnie, and Rogelio are on route back to the the Fright Zone in a Horde transport, bringing a special armor plating for Catra. As they pass through the Whispering Woods, a spore storm eats through the metal of their transport and damages the wiring, bringing it to an abrupt halt.

In the Crystal Castle, She-Ra becomes increasingly frustrated with Light Hope for continuing to send her on repetitive training missions to defeat easy-to-destroy synthetic Horde bots. She demands answers, but Light Hope continues to dodge until she short circuits. Light Hope prevents Adora from leaving due to the corrosive spore storm outside, but cannot answer her questions or recognize Adora, since she is rebooting.

Out in the spore storm, Kyle, Lonnie and Rogelio attempt to repair their transport until wind beings to send the spores swirling into their skin, burning them and forcing them to retreat inside their transport. While they struggle to come up with a plan to escape their predicament, Catra contacts them and callously demands they fix their transport and resume their journey without delay.

As Adora talks with Light Hope, she realizes that Light Hope does not yet have all of her memories and inhibitions, and so asks Light Hope for help. Unfortunately, she does not remember anything Adora wants to know, and continues to cause gravity malfunctions, spider invasions, and floods by accident, which Adora has to deal with. Eventually Light Hope's reboot freezes, forcing Adora to manually override Light Hope, but she inserted the data crystal override into an incorrect slot and failed.

Meanwhile, Lonnie, Kyle, and Rogelio fail to decide who to send into the spore storm to fix the transport, and tensions rise to a boiling point until Lonnie yells at Kyle that Catra doesn't care about them, that it is everyone for themselves. Despondent about not having the friendships he thought he had, Kyle goes out into the storm alone, and soon succumbs to the corrosive spores. Lonnie and Rogelio use the armor plating as an umbrella to rescue Kyle, Lonnie carrying him to safety. Rogelio notices that Kyle has already fixed the transport. They then flee the forest, in friendship.