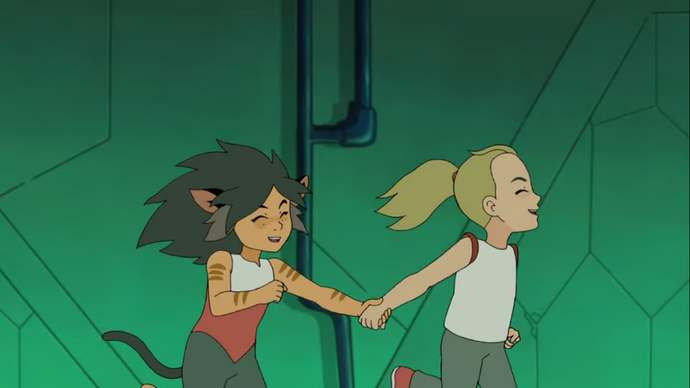 Promise is the eleventh episode of Season One of She-Ra and the Princesses of Power. It was released on Netflix with the rest of the first season on November 13, 2018.

Adora enters the First Ones' citadel with Catra on her tail. Inside, they're caught in an illusion simulator that brings back painful memories.

Adora enters the Beacon, which she later finds out is called the Crystal Castle, in her quest to heal Glimmer, attempting to communicate with Light Hope. At first, Light Hope doesn't appear; an unnamed hologram appears, glitching. This unnamed hologram will not work with Adora. Adora realizes it might work when she is She-Ra so she transforms and gets welcomed. This hologram then announces that Light Hope will soon be there. And momentarily Light Hope replaces that unnamed hologram and begins interacting with Adora.

After trying to talk with the hologram, She-Ra only learns that her sword is a portable Runestone keyed exclusively to her. Catra snuck in along with Adora and stole a Data Crystal. Adora realizes that Catra followed her inside as she unknowingly set off the Castle's alarm while stealing the Data Crystal, forcing them to run from its defenses. They run into a hallway while spiders where chasing them and when they reach a dead-end, She-Ra breaks a wall which causes a rockslide in the hallway. Catra is worried about what She-Ra has just done as She-Ra grabs Catra and transforms the sword into a shield.

When they come out of the rocks and boulders, Adora asks Catra what she is doing there. Catra says that the Beacon set a beam of light a mile high, so it wasn't hard. Adora tells Catra that she shouldn't be there and if she's protecting her, the bugs will see Adora as the enemy. Adora looks at Catra smugly and Catra suddenly knows what it's about. Catra says that she gave the sword back to Adora in the Fright Zone because of some other reason and not because she likes Adora. Catra insists that she'll find her own way out and then realizes that there is only one way to go. The two of them walk down the corridors and hallways. When they reach what Catra thinks is a dead end, Adora proves it's not and opens a door by saying, "Eternia." Catra is annoyed that it's just a dark room. She turns around to go back, but to her surprise, the door is gone. Adora sees a kind of red dot and goes towards it, thinking it was Light Hope. The dot scans them and the darkness turns into the Fright Zone. Adora and Catra are both surprised and Adora blames it on Catra. Catra admits she has no idea what was going on either. They go their separate ways and Catra tries talking to a guard, then realizes it's all a hologram.

Adora hears Catra calling her name, so she turns around to see a younger version of Catra. Catra comes up to Adora to say something, but Adora hushes her and they look at the memory. Young Catra claims she was bleeding and Adora tries to convince Catra that she is not bleeding. Adora asks why she would even want to fight with Octavia and Catra says that she had only existed near her and had scratched Octavia in the face and called her a dumb-face. Adora then asks Catra to lead her to Octavia where she calls Octavia a dumb-face. The two girls run from Octavia together, holding hands. Suddenly, they are their regular selves again. They realize they were holding hands and immediately let go. Catra is surprised and asks Adora what that was. Adora responds with saying that she doesn't know and that it's somehow tapping into their memories. Catra asks Adora how she deals with all this magic stuff and Adora says she's only dealing with it because she has to figure out how to heal Glimmer after "someone" got her cursed. Catra says, "What do you want? An apology? You're not getting one."

They continue walking and enter a different room. After walking for a while, Adora asks Catra why she gave the sword back to her. Catra responds with, "This again. I told you, it's not because I like you." Adora says that it's the one thing she can't figure out. Because why would Catra risk getting caught? Adora slips and almost falls into a hole, so Catra reaches out to grab Adora. Catra asks Adora is growing up in the Fright Zone was all bad, but Adora says that it wasn't and admits that she misses Catra. Catra, on the other hand, doesn't want to admit that she misses Adora. Adora falls and when she fell, she fell on a simulation. This second memory is from when Adora and Catra where in a training simulation and Lonnie and Adora team up on Catra. In the end, Catra defeats Lonnie and Adora defeats Catra. After the simulation, everyone is happy about Adora's win. Catra claims that second place suits her just fine and Adora shouldn't worry about her. Adora looks at Catra suspiciously and runs off with the rest of their squadron. Catra becomes angry and depressed and goes into the locker room and stares at herself in the mirror. Catra is then transformed into her present self where she is taken by the spiders.

Catra calls out for Adora but she doesn't come so Catra deals with the bugs herself. She starts getting excited about beating the spiders up when Adora comes and stabs them with her sword. Catra says that she had it under control, but Adora ignores her and says that they need to stick together. As the two kept walking, Adora urges Catra that she's not a bad person and that she could join the Rebellion. As they were walking they came across another memory. In this one, they were playing around and they came across Shadow Weaver's sanctum. Present Adora said to Catra that they don't have to go in there, while young Adora says, "We're definitely not allowed in there." Both Catra and Adora looked at each other and ran inside. They stopped and looked around. Adora started to get nervous and suggested that they get out of there. Suddenly, the girls hear Shadow Weaver coming so they hide behind the Black Garnet, hoping Shadow Weaver wouldn't see them. Shadow Weaver was tired at the time and took off her mask. Adora gasped and Shadow Weaver gasped. Catra and Adora tried to escape but Shadow Weaver cut off the entrance. She had also frozen Catra. Shadow Weaver started to threaten Catra and claimed that if she did anything to jeopardize Adora's future she herself would dispose of Catra. She let Catra go and told Adora to keep her under control.

They walked out together and turned into their normal selves again. Catra snatched Adora's arm off her shoulder and yells that she always has to play the hero. Adora fights back and says that she was just trying to protect her. Catra yells back and says that Adora never protected her. She says, "Who do you think took the fall for you when you left? Who was protecting me then?" Adora insists that she doesn't have to be with the Horde and Catra gets really angry and says, "Why do you think I gave the sword back to you in the Fright Zone? I didn't want you to come back, Adora!" And with that, Catra runs off. Adora looked hurt as she looked at Catra run away. Suddenly, the hologram started disappearing and the spiders were back. Adora tried to transform into She-Ra, but a spider grabbed her sword and wrapped into a web. Adora tried to grab the sword but she got shot by a web and fell into the ledge only hanging onto the web.

Meanwhile, Catra was running away and was begging to get out of there. Suddenly she comes across another memory. In this final memory, Catra is sitting in the bed, crying. Adora comes in and makes her feel better. Adora promises to stick by Catra's side, then the two walk off together. In doing so, Catra's past self looks back at Catra's present self. This angers Catra. As Adora was hanging, she hears Catra coming to her aid. Catra shows herself and admits to Adora that she is much stronger than anyone ever thought and that Adora was the one holding her back. Catra, with sword, cuts the web Adora is hanging onto. Adora is surprised and asks Catra to stop. Catra doesn't listen and throws the sword of protection over the ledge. Catra then says, "Bye Adora, I really am going to miss you." Then Catra disappears. Adora has tears in her eyes by now. She closes her eyes and when she opened them, she hangs on for dear life before hearing Light Hope telling her to let go. Adora blinks the tears away and lets go. Adora falls into the abyss.

Later, Entrapta is working on Emily while Scorpia is recalling her and Catra on a boat. Entrapta says that she already mentioned it. Suddenly the door opens and Catra comes in. Catra asks why Entrapta is loose, while Scorpia is worried about Catra. She gives the Data Crystal to Entrapta, then Entrapta and Scorpia celebrate. Catra tells them to quiet down because she is going to sleep. This is the end of the episode.

Retrieved from "https://she-raandtheprincessesofpower.fandom.com/wiki/Promise?oldid=50226"
Community content is available under CC-BY-SA unless otherwise noted.