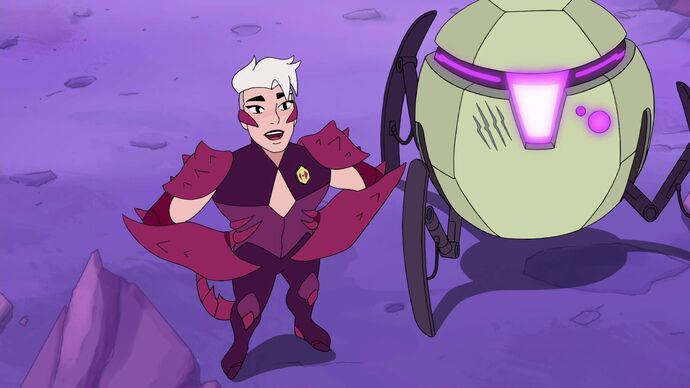 Protocol
Mer-Mysteries
Princess Scorpia is the sixth episode of Season Four and thirty-second episode overall of She-Ra and the Princesses of Power. It was released on Netflix with the rest of the fourth season on November 5th, 2019.

Catra orders Scorpia to find Entrapta's recordings so Hordak can perfect his experimental technology. Flutterina sows dissent in The squad.

Scorpia begins her day rationalizing away Catra's statements about not being her friend in the episode, "Flutterina". She addresses her day with forced cheer even as the Horde soldiers around her rush around in a panic.

Meanwhile, Adora, Bow, Glimmer, and Flutterina continue to attack the Horde's northern perimeter, taking outpost after outpost. Glimmer becomes frustrated due to Bow and Adora acting as her bodyguards, defeating every enemy around her before she can properly engage, and Flutterina rubs it in, angering Glimmer further.

In the Fright Zone, Hordak complains to Catra about their outposts continually being taken, but Catra laughs it off, assuring him that she recalled soldiers from the outposts and left them with skeleton crews in order to amass numbers for a major assault. Hordak however needs Entrapta's recordings, because he has been unable to complete an appropriate weapon for the assault, and tasks Catra with finding them. Catra then tasks Scorpia with finding them. Happy to have some way to help Catra, Scorpia sets out to find the recordings, encountering Lonnie on the way, who tells her to wake up and realize that Catra doesn't care about any of them.

At yet another outpost, Glimmer and Adora have a mid-battle talk coached by Bow, where they both seem to settle their differences until Flutterina intervenes again. Getting herself "caught" by two remaining Horde soldiers, Glimmer is forced to use yet more magic from Shadow Weaver to extricate Flutterina safely, and then interrogates one soldier on threat of torture. She learns that Catra pulled her forces back, but Adora and Bow question her methods, saying that she went "too far" when she threatened to use her magic to torture a prisoner. Angry again, Glimmer leaves after making excuses for her behavior.

At Horror Hall, Scorpia has little luck finding the recordings, until Emily reveals that the recordings are stored inside herself. Scorpia makes to report back to Catra, but Emily convinces Scorpia not to, because Scorpia would scrap and disassemble Emily to access the recordings. When Scorpia wavers, Emily uses recordings of Catra betraying Entrapta to solidify in her mind the reality that Catra would go to any length to get what she wants.

Resolved, Scorpia presents a piece of junk tech to Catra, saying she "accidentally" damaged the recordings when she supposedly extracted them from Emily. Naturally, Catra exploded in rage, berating and belittling Scorpia for her uselessness, prompting Scorpia to call Catra a "bad friend" and leave. Catra then reports her failure to Hordak, and gives a hysterical speech about not needing anyone else. Fortunately, Hordak sees a piece of First Ones' tech and gets the inspiration to complete his weapon. They then plan their attack for a day later.

Alone with Emily, Scorpia decides to leave the Horde so that she can save Entrapta.

Retrieved from "https://she-raandtheprincessesofpower.fandom.com/wiki/Princess_Scorpia?oldid=49611"
Community content is available under CC-BY-SA unless otherwise noted.