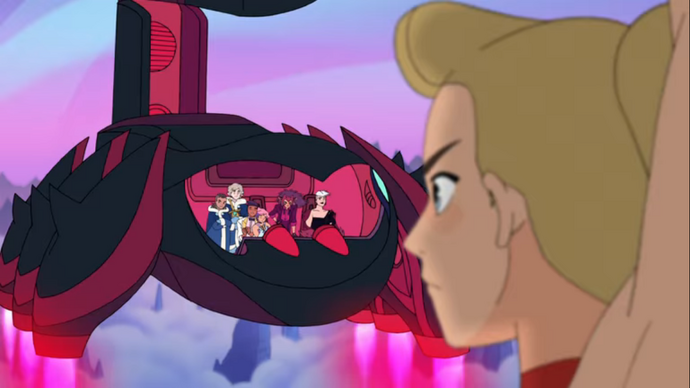 In the Shadows of Mystacor
No Princess Left Behind
Princess Prom is the eighth episode of Season One of She-Ra and the Princesses of Power. It was released on Netflix with the rest of the first season on November 13, 2018.

It's time for Princess Prom, hosted by Princess Frosta in the Kingdom of Snows. Adora wants to recruit her, but friend troubles and unexpected guests get in the way.

Everything begins when Adora receives an honorary invitation to the All Princess Ball, aka the "Princess Prom", a ball that occurs once every decade. Bow explains to Adora that the "All Princess Ball is a meeting of all the princesses of Etheria," and Glimmer excitedly tells her that it's not only a meeting but a "Giant party". She playfully dances her about the room telling her how there will be food and music and dancing and fancy dresses and Adora becomes quite wary of the occasion. She brings up the point that she's only a princess sometimes, but Glimmer won't have it. Princess Prom is for every princess ― including Adora. Bow unravels Adora's invitation to reveal a never-ending list of rules, expectations, and etiquette. Another surprise about Princess Prom, it's extremely ancient. Because of this, it has garnered quite a level of prestige and old-fashioned customs. Something Adora knows nothing about. But Glimmer then tells her that it's being hosted by Princess Frosta of Kingdom of Snows that Frosta's magic is incredibly powerful. She'd be a great asset to the Princess Alliance. Still, Adora is worried. She was raised in the Horde and presumably never attended something so lavish and cordial. She doesn't understand the rules or way of Princess life because she was taught that Princesses were evil. Glimmer reassures her that she and Bow will be right there with her, but Bow lets it slip that he's going with Perfuma. This admission brings Glimmer to doubt her friendship with Bow, fearing that Bow's growing further apart from her.

Catra and Scorpia, on the other hand, are plotting their next move against the Rebellion. Catra decides Shadow Weaver is a loose end. Her obsession over trying to retrieve Adora is putting them all at risk. If Hordak discovers that she's been acting against his orders, Catra believes she'll drag them all down with her. She needs to replace her. But first, she tells Scorpia that she needs to capture Adora so Shadow Weaver won't demote her back to Cadet. Then she needs to impress Hordak so he'll give her Shadow Weaver's position, so Scorpia suggests that they try something at the princess ball. It's literally a gathering of all the Princesses, including Adora. Scorpia was sent an invite because she too is a princess. Scorpia's family allowed Hordak to stay in their Kingdom, and use their Runestone. After a while, she joined the Horde. She tells Catra that she isn't going to the ball because she was never liked, even before her family joined Hordak's army, but Catra convinces her to go and show all those princesses that being different isn't a bad thing.

Meanwhile, Bow is trying to explain to Glimmer that Perfuma asked him out of the blue and he just agreed to go with her. Glimmer is still saddened by the change that is happening, but Bow can't see her sorrow. She meets with Adora who's been rigorously preparing for the ball as if it's a mission instead of a party. She's been studying since she received her invitation, trying to cram years of information into a few days. Even Glimmer seems to think it's overkill. But this is the only way Adora knows. Glimmer then inquires about her dress and when Adora says she's going to go as She-Ra because she has better hair, Glimmer shoots the idea down. No weapons allowed. Princess Prom rules. Since it's a peaceful gathering, all weapons are left at the door. So Glimmer screams that it's "MAKEOVER TIME" and it shows a montage of Glimmer trying to find the perfect dress and hairstyle for Adora. During the whole time, Adora seems uncomfortable and tries to get back to studying, that is ― until she finds the dress. It also shows Catra and Scorpia searching for the proper look and Bow and Perfuma trying to look the part.

Then we go to the Ball. Prom. Whatever. We see Adora "checking in" her weapon and freaking out about how the guard treats her precious blade. But Glimmer pulls her away, further into the palace. They enter an enchanting ballroom and approach a raised platform where Princess Frosta sits. As the hostess, they are expected to greet her before they can enjoy themselves. Adora is thinking that if they can convince Frosta to join their Rebellion then all the other princesses are sure to follow. But in her shock at the princesses ripe age of 11 and three quarters, she blurts out that she can't possibly be the ruler of the Kingdom of Snows, she's only like "TEN!" Glimmer tries to pick up the pieces, but Frosta is not impressed and shoos them away before they can pitch their "join The Rebellion" speech.

Despite being at Princess prom, Glimmer is depressed when she realizes that it's only her and Adora there. No Bow. But Adora points out Entrapta and they hurry over to somebody they know. Entrapta, in her usual clothes, calls the ball a "Social Experiment" ever the scientist. She's been watching everybody mingle, excited over the fact that people from different worlds and hierarchies are under the same roof, forced to act civil with one another. They also have tiny food. She then points out Bow, who's just entered with Perfuma. When Glimmer sees them, you get the feeling that she's jealous of the smiles on their faces, of how they match one another. Mermista appears, but Glimmer is too focused on the laughter coming from her friend and his date. However, Adora notices how Sea Hawk is there, singing about his date―Mermista. Of course, Mermista denies that he's anything but her ride, but her face turns red with embarrassment. Mermista then leaves to find a Kelp bar and Sea Hawk follows just as Bow and Perfuma arrive.

Glimmer tries to make it seem as if she's having a great time with Adora but it's obvious it's an act she's putting on to make Bow as jealous as she is. Adora leaves to speak to Frosta alone, but the conversation doesn't exactly as planned. Princess Frosta claims that the Kingdom of snows has been and always will be perfectly capable of taking care of itself. They will not join the Rebellion ― they are not threatened by the Horde. They will stay as they've always been ― neutral. So Adora goes back to find Glimmer. She's still watching Bow and his date from the sidelines. Adora asks her why it bothers her so much that Bow is hanging out with somebody else. And she immediately denies it. She says that he can hang out with anyone he wants, it's just that she never had many friends. It's always been just her and Bow, and she's worried that he will find Perfuma more interesting and better than her. Adora reassures her that Bow isn't the type to just leave all of his old friends behind, but ironically Catra and Scorpia enter the room.

Glimmer and Adora try to get Frosta to keep them from staying, but Frosta is adamant. She will not break the rules of Princess Prom on the word of a girl who's only an honorary princess. Frosta tells her that she has worked too long to gain the respect she is due, and she's not about to throw it away on a hunch. She lets them in. Adora and Glimmer agree to watch them, knowing that they're up to something sinister. But they split up. So Glimmer follows Scorpia and Adora follows Catra. All the while, Adora over analyzes Catra's every step. While Scorpia is eating, Glimmer and Bow are given a chance to talk. Bow tells her that he wanted to hang out with her, Perfuma and Adora, but it was Glimmer who kept running away and acting all weird and standoffish. He leaves her, and that's when Glimmer realizes that Scorpia is gone. Bow goes in search of warmth because it's really cold in an ice castle, but on his way out he runs into Scorpia who's been setting bombs on all the pillars. He tries to warn the guards, but they don't believe him. And when he turns around, Scorpia is there, holding Adora's sword. As it turns out, those guards were Horde soldiers in disguise.

Frosta then announces that it's time for the first dance. Catra dances with Adora. But as she changes hands, she talks to Glimmer who's in tears because of her fight with Bow. Then she changes hands again and talks to Perfuma who's been looking for Bow who never returned after going in search of his cummerbund. She then switches hands again and goes back to Glimmer who tells her she hasn't seen Bow since their fight. Then she goes back to Catra who tells her that maybe her plan has already worked. Catra baits her by asking her where Bow is, as if she already knows, causing Adora to push her to the ground. Frosta, angry, traps Adora in a cage of Ice, telling her that she has broken the rules of Princess Prom and she hereby revokes her invitation. But during her speech, the building shakes and each of the heat bombs explodes. Adora, trapped, tells Glimmer that Catra and Scorpia have Bow. So naturally, Glimmer goes in search of him. She finds him being dragged to a ship by Kyle and Lonnie. She takes them out but doesn't realize that Scorpia is right behind her. She's poisoned by her venom. Meanwhile, Frosta runs to her Rune crystal and uses its energy to prevent her castle from collapsing. Adora, now freed from her icy prison, chases after Catra. After an intense battle on the roof, Catra almost falls to her death but Adora catches her just in time. However, because the building is repairing itself, a piece of ice rejoins with the castle and the resulting shake causes them both to fall off the edge. Adora uses her hair pick, jabbing it into the side of the building and grabs onto Catra to prevent them from falling to their deaths. But Catra doesn't want Adora's saving, and she slips out of Adora's hand. She lands on a ship that flies to Adora's eye level. She sees and unconscious Bow and Glimmer on board, along with The Sword of Protection. Catra laughs and tells her that she'll see her later, leaving her hanging on the side of the castle, tears in her eyes. Her friends have been captured, her sword is gone, and she's alone.

The Music of She-Ra and the Princesses of Power

Retrieved from "https://she-raandtheprincessesofpower.fandom.com/wiki/Princess_Prom?oldid=50900"
Community content is available under CC-BY-SA unless otherwise noted.