She-Ra and the Princesses of Power Wiki
Register
Don't have an account?
Sign In
in: Episodes, Season 3 Episodes, Episodes that focus on Adora,
and 7 more 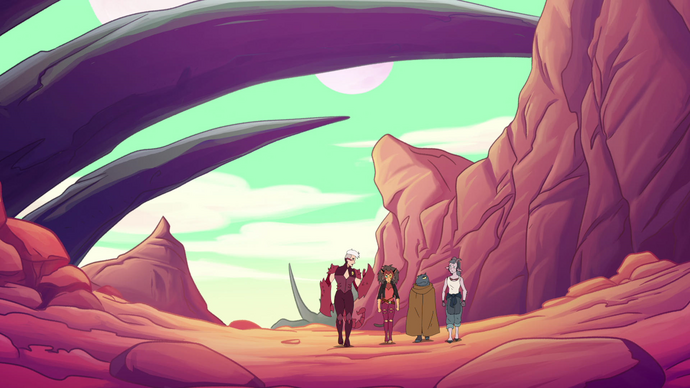 Catra and Scorpia arrive in the Crimson Waste and have no trouble fitting in. Huntara and The Best Friends Squad enter Mara's ship to try to unravel the mystery of her message.

Exiled to the Crimson Waste on an apparent suicide mission by Hordak, Catra is despondent over her dreams turning to "dust" over a single mistake, and annoyed that Scorpia has accompanied her. They enter the same seedy bar as The Squad had, and Catra intimidates the locals into guiding her to where Adora is.

Adora, meanwhile, enters Mara's ship which Huntara claims is haunted. True to her word, Mara's voice begins emanating from the ship. Adora uses her sword to discover and open a doorway inside, from which a stream of bats emerge, and they enter. At the same time Catra and Scorpia continue to abuse their guides as they move through the waste, Catra beginning to warm to Scorpia, until they walk right into an ambush.

Within the ship, Adora and company manage to reach the bridge, where a broken hologram of Mara plays on a continuous loop. Adora becomes frustrated until she slams a console, noticing a slot in which to place her sword. She does so, and the bridge comes to life, a video log of Mara then appears in a chair. She says that she "barely made it out" and that if anyone is listening to this, they are the new She—Ra, which Mara says she attempted to prevent, and that she will have failed to prevent the sword from passing on.

In the ambush, it is revealed that the one who organized the ambush is Tung Lashor, leader of the second-most powerful band in the Crimson Waste after Huntara. Tung Lashor duels Catra and loses, with Catra taking over his band. Once more in the ship, Mara relates how they had just intended to study Etheria's magic, but everything "went wrong". The message becomes garbled, and the next intelligible phrase is that Mara used a portal to pull Etheria into a completely empty dimension in order to "keep everyone safe", saying that this is the "one place they'll never find us" and that hiding is their only option to save them from "what they would do. The deaths that would follow."

An alarm then begins wailing in the recording, and Mara rushes to finish, saying that the Sword of Protection is the "Administrator Key" to Etheria, and with it a portal can be activated, but she begs the future She-Ra not to do it, to instead "leave us here". Mara continues that "death and destruction will follow" if a portal is opened, and that "for the good of the universe, Etheria must stay in Despondos". Mara tries to explain what will happen if Etheria leaves Despondos, but at that very moment the recording ends.

Resounding clapping rings out, and paralyzing darts fly from the shadows, knocking out Bow and Glimmer, although Huntara blocks one intended for Adora. Huntara and Adora are then surrounded by Catra and her new gang, and although Huntara blocks another volley of darts meant for Adora using her body, and Adora reaches her sword, before she can say "Grayskull" Catra rips the sword from Adora's grip using a whip she took from Tung Lashor. Scorpia then restrains Adora, although Huntara is able to resist the numerous paralyzing darts and manages to take Bow and Glimmer out of the area.

The band celebrates their victory, giving a toast to Huntara being ousted from the Crimson Waste, to their newly gained loot, and to their new leader, Catra. Catra also has a toast given to Scorpia, and shortly after they head into a side room together where Catra cannot wait to return the sword to Hordak and reclaim her place in the Fright Zone. Scorpia however, asks why they should even return at all. She says that Catra has been truly happy in the waste, unlike the Fright Zone and they could rule the waste together. Catra is sorely tempted, and doesn't deny Scorpia's claims, but leaves anyway to "check on the prisoner".

Within the holding cell, Adora tries to dissuade Catra as opening a portal could allow the entirety of the Horde's army into Etheria, although Catra is unconcerned, saying more Horde could only be a good thing and that Adora listens to "anything weird old holograms tell" her. Catra asks how she knows Hordak's plan anyway, at which point Adora reveals to Catra that Shadow Weaver switched sides and told her everything in Bright Moon. Catra snaps, shocked that Shadow Weaver left her for Adora and blaming Adora for everything that has happened to her. Despite Adora's pleas, Catra walks dazedly from the holding cell back to the party area. Scorpia gets her attention, but in a rage, Catra is certain that they will go back to the Fright Zone, open a portal, and crush all of her enemies.

See: Once Upon a Time in the Waste/Transcript

See: Once Upon a Time in the Waste/Gallery