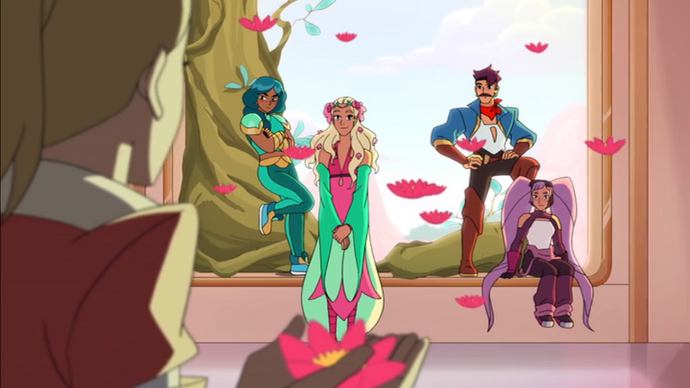 No Princess Left Behind

No Princess Left Behind

Princess Prom
The Beacon
No Princess Left Behind is the ninth episode of Season One on She-Ra and the Princesses of Power. It was released on Netflix with the rest of Season One on November 13, 2018.

With her friends and the sword held prisoner in the Fright Zone, Adora turns to the Princess Alliance for help on a dangerous rescue mission.

In this episode, the newly reformed Princess Alliance is at its lowest point yet. After capturing Glimmer and Bow, The Horde has the Sword of Protection and all seems lost.

Hordak proposed a prisoner swap. He planned to let Glimmer go free in exchange for taking Queen Angella as a prisoner, which the Queen accepts. Glimmer was being held by Shadow Weaver in a magical torture device that causes her tremendous pain and caused terrible glitching. The way that Shadow Weaver used the Black Garnet to restrain Glimmer damaged Glimmer's connection to her own Runestone which caused her glitching.

Mermista, Perfuma, Sea Hawk and Entrapta volunteered to rescue Glimmer and Bow with Adora and mounted a daring escape. In the Fright Zone Kyle and Bow met and formed a tenuous friendship. Entrapta became fascinated, enamored and enchanted with Horde tech; she even re-programmed a Horde bot and named it "Emily". Mermista endured more than anyone should to get inside the Horde compound. Sea Hawk and Scorpia met again. Perfuma's patience was challenged by Entrapta's constant distractions.

During the fight that ensued Adora sent the heroes on their way and surrendered to the Horde soldiers. Shadow Weaver attempted to wipe Adora's memory of She-Ra and her time with the princesses; but Glimmer, seeing Shadow Weaver torture Adora, broke free of her bonds and attacked the sorceress with a savage and vicious sparkle attack. Glimmer and Adora fled to join the others, but not before Entrapta was lost to an explosion while trying to save Emily.

Catra, alone, confronted Adora and Glimmer. She returned the Sword of Protection to Adora, hoping that she would never see Adora again. Glimmer and Adora escaped and joined the others on a stolen Horde skiff. The heroes, believing Entrapta is dead, left the Fright Zone emotionally heartbroken.

Retrieved from "https://she-raandtheprincessesofpower.fandom.com/wiki/No_Princess_Left_Behind?oldid=50527"
Community content is available under CC-BY-SA unless otherwise noted.