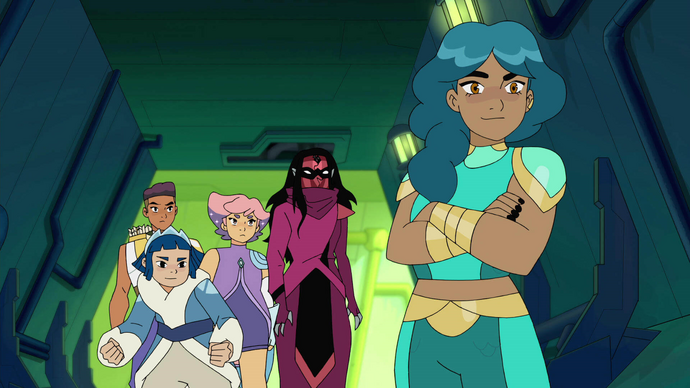 Glimmer wants to make a raid on the Fright Zone, and her mother isn't willing to help…but Shadow Weaver is. Adora tries to talk to Entrapta about the portal.

Glimmer and Bow arrive in Bright Moon to request Angella's aid in rescuing Adora from the Horde. Angella however refuses to move until Glimmer explains herself. Meanwhile in the Fright Zone, Hordak tests how his new exoskeletal armor, able to move massive machinery without trouble and only having a slight malfunction that Entrapta quickly fixes. She also discusses how "planetary interference" is blocking them from opening a portal, wondering what they might need to cut through it and make the planet allow a portal to be opened. Hordak says that they only need to open a portal briefly enough to send a signal to Horde Prime, at which point he could open a portal himself. Entrapta however doesn't like the idea of Hordak having to leave when that happens, and suggests collecting more data and not rushing.

At that moment Catra, Scorpia, and the rest of her band from the Crimson Waste arrive with a bound and gagged Adora, as well as the Sword of Protection. As she enters, the technology in the room begins to flicker, and Catra gives Entrapta the sword. Catra tell them that it is the "key to the whole planet", and Adora's muffled protests intensify. Even though Adora struggles uselessly against her gag and bonds, Catra urges Hordak to hurry up and open a portal so that they can crush The Rebellion using Horde Prime's forces.

In Bright Moon, Bow, Perfuma, Frosta, and Mermista spy on Angella and Glimmer's argument. Glimmer argues for decisive action to save the planet which is imminently in danger, while Angella argues for caution and prior formulation of a plan in order to ensure success so as not to "lose anyone else". Angella asks for trust, but Glimmer fires back that she did not trust her with the knowledge that Shadow Weaver was her father's teacher, and that she is paralyzed by fear into inaction when they could be using Shadow Weaver to infiltrate the Fright Zone. Angella becomes angered by this, and as Queen of Bright Moon, orders Glimmer to desist unless she can come up with a suitable plan.

Once more in the Fright Zone, Entrapta has hooked up the Sword of Protection to their portal machine. The bound and gagged Adora is tied to a pillar, screaming frantically into her gag. This prompts Hordak to question if she had to be present. Entrapta utterly ignorant of how it works, and un-gags Adora in order to ask her how it works. Adora refuses to answer, so Entrapta re-gags her but does it carelessly, allowing Adora to talk more. Adora accuses Hordak of stealing her as a baby and lying to her, to which he responds that he could not lie as he has no inkling about the origins of someone as "inconsequential" as her. Adora says she will make him fail, which angers him, but again his armor malfunctions and he tells Entrapta to get the portal to work. The sword then begins spinning, and locks into place at a nexus of power and begins charging up, much to Entrapta's delight.

Back in Bright Moon, Glimmer sneaks into Shadow Weaver's chamber to ask for help, only to find Shadow Weaver lounging insouciantly, expectant of this visit, knowing that she has the knowledge they need to defeat the Horde. Glimmer tells Shadow Weaver that Hordak has everything he needs to open a portal, which alarms Shadow Weaver, and offers to enhance Glimmer's power to such a degree that they might teleport directly into the heart of the Horde; but she must be freed and allowed access The Moonstone to do so.

Catra's group don themselves in Horde uniforms in the Fright Zone, despite Scorpia's objections, until Catra herself arrives. Catra is pleased that the portal will soon be open and the Princesses will be crushed, due to her actions, but she thanks Scorpia for making it possible, which Scorpia appreciates. Adora tries to dissuade Entrapta from opening the portal, and although Entrapta allows that some anomalies could pose an issue, she just takes it as a need to do more tests and so runs off, asking Adora not to try and escape.

Beneath The Moonstone, Shadow Weaver prepares to draw power from it even as Frosta, Perfuma, and Mermista arrive. They insist on going as well and tell Shadow Weaver to "make that thing bigger", referring to her sorcerers glyphs. At this time, Angella discovers Glimmer to have left and Shadow Weaver to have escaped, so she rushes back to the Moonstone even as Shadow Weaver has completed her massive glyph that begins drawing energy forth from the Moonstone. Despite the speed of Angella's flight, Shadow Weaver finishes drawing up power and reaches a through a sigil toward Glimmer. Although hesitant, Glimmer does eventually grab Shadow Weaver's hand. Dark power floods through her, surging up her arm and around the Moonstone in a black cloud, even as Angella closes to within shouting distance, screaming "no!" Although Glimmer looks back at her mother, she teleports anyway, causing the cloud of power to flare up and around the platform in a massive detonation that displaces enough air to launch Angella away even as everyone on the platform is transported to the Fright Zone.

Unfortunately, although they arrive in the Fright Zone, it is not the inner sanctum. Shadow Weaver urges quiet so they can sneak there, but they are immediately found out when someone walks in the room. Perfuma stays behind to hold them while the rest press on, but they run into Lonnie and Rogelio. Seeing themselves outnumbered, they quickly raise the alarm even as Mermista and Frosta hold them off while Shadow Weaver, Bow, and Glimmer move on. They quickly encounter Catra however, and Shadow Weaver grabs Glimmer's hand to draw power from her.

Shadow Weaver tells Catra she is no match, to join or stand aside, but Catra attacks anyway. Although she downs Bow, Shadow Weaver and Glimmer flicker around the area, dodging every attack until Catra anticipates where they will teleport and wraps her whip around Glimmer. This proves fatal to her fight, as Shadow Weaver had waited for just such an action and quickly grabs the whip, sending sorcerers lightning along its length and incapacitating Catra. With Catra down, Shadow Weaver offers Catra "a way out", but Catra is furious that Shadow Weaver abandoned her, yet supposedly came back for Adora. Shadow Weaver responds that she came only to destroy Hordak, and warns Catra not to make her destroy her too, but Catra is defiant and glad that the portal shall open, so Shadow Weaver begins torturing Catra with magic. However, as she uses Glimmer's power to do so, she begins running out as Glimmer becomes tired, and stops when Bow tells her to, lest she drain Glimmer dry. The torturous cloud then fades, and Catra retreats.

Meanwhile, Entrapta continues testing and running diagnostics, Scorpia hanging out with her. Entrapta discovers "catastrophic" anomalies associated with opening the portal, such that would "unhinge time and space, creating a warped reality that would collapse in on itself, erasing us from existence." She then concludes that they can't actually go through with it. Catra walks in at that moment however, demanding they open the portal, but Entrapta explains that Adora was right and that they would all die if the portal was opened. This unhinges Catra, saying that "Adora gets everything she wants, but not this time." She screams that she doesn't care what it takes, that the portal is to be opened now, to which Entrapta hotly refuses, saying that she will Hordak who would understand. She starts to walk away but Catra zaps her from behind, knocking her out cold. Catra orders her sent to Beast Island, and although Scorpia objects, Catra threatens her as well, so Scorpia backs down.

In Hordak's inner sanctum, Catra reports that the Princesses are here and urges him to open the portal. Hordak calls for Entrapta, but Catra lies, saying that Entrapta allowed the Princesses in and betrayed them. Hordak disbelieves it, but Catra tries to persuade him over the muffled cries of Adora. They are interrupted by the arrival of Glimmer, Bow, and Shadow Weaver, so Catra screams to pull the switch even as Shadow Weaver effortlessly swats Catra aside with a blast of dark magic. Hordak then deflects an arrow with his hand and launches a massive pipe at the trio, although Shadow Weaver deflects it against the wall. The wanton destruction of the lab causes machinery to begin to rain down however, separating Hordak from the switch; but not Catra. Adora pleads with Catra not to, but Catra only smirks, pulls the lever, and the portal opens.