She-Ra and the Princesses of Power Wiki
Register
Don't have an account?
Sign In
Advertisement
in: Episodes, Season 4 Episodes, Episodes that focus on Adora,
and 5 more

View source
watch 02:24
Wiki Targeted (Entertainment)
Do you like this video?
Play Sound 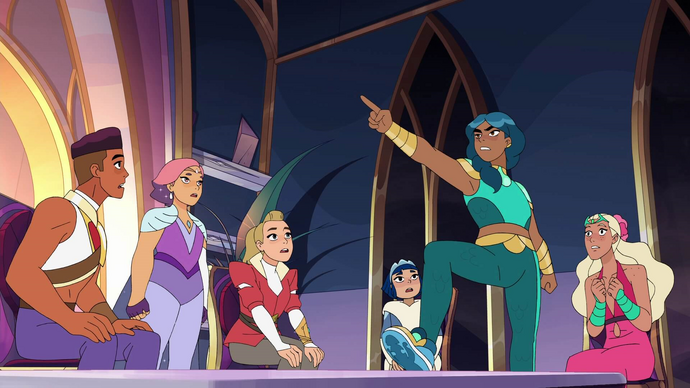 Princess Scorpia
Boys' Night Out
Mer-Mysteries is the seventh episode of Season Four and thirty-third episode overall of She-Ra and the Princesses of Power. It was released on Netflix with the rest of the fourth season on November 5th, 2019.

The heroes suspect a Horde spy in their midst. Mermista attempts to sleuth them out, using tactics from "Mer-Mystery" novels to question nearly everyone in Bright Moon. With counsel from Shadow Weaver, they finally apprehend the culprit.

After a crushing and humiliating defeat in the attempt to retake Dryl, Glimmer called a meeting with the Princess Alliance to assess why they lost. Mermista quickly took over, jumping at the chance to act as an investigator, like in her favorite "Mer-Mystery" novels. Unwittingly, she was actually correct about a spy being in their midst. However, her insistence in interrogating nearly everyone in Bright Moon, including people who were not present at the battle of Dryl, and interrogating people about "murder" that did not happen, results in nothing but confusion.

Meanwhile, Flutterina was reporting back to Catra on the developments, utterly unconcerned about Mermista's attempts to discover her. As Mermista's "investigation" continued, they uncover contradictory testimonials from officers and Princesses about receiving orders from different Princesses when they were ostensibly somewhere else, who had no recollection of giving such orders, but Mermista promptly discarded this. At the same time, Bow became convinced that he was actually the spy, to everyone's consternation.

While the investigation lumbered on, Adora interrogated Shadow Weaver, convinced that she was the spy. Shadow Weaver claimed that she had been making tea in her garden even as Adora rounded on Glimmer for letting Shadow Weaver walk around without her guards. When the argument escalated, Shadow Weaver stepped in to calm things, but Adora remained suspicious.

Adora and Glimmer interrogated Flutterina next, who quickly sparked an argument between the two about Shadow Weaver, again. They then continued to investigate Sea Hawk, who could not restrain himself from exaggerating his exploits in battle, and then several kitchen staff who were not even present at the battle. They are followed by Bow, who, once again, insisted that his "evil alter-ego" was responsible for the crime.

Frustrated, Glimmer planned to head out alone to strike at the Horde, but Adora convinced her to stay. Immediately after, the two got news of the War Room communications panel being sabotaged. Again, the Princesses have conflicting stories about who was in the room, with Mermista claiming not to have been there despite Frosta supposedly having seen her leave the room.

At their wits end, Adora and Glimmer finally dropped all excuses of an investigation and took counselling from Shadow Weaver. She came up with a plan to talk about a "backup" communication device so that the person who destroyed the original would go after it, followed by the Princesses, pretending to argue seriously enough that the traitor would take the opportunity to slip away. Adora and Glimmer executed the plan perfectly, and the moment Flutterina left, they stopped arguing and followed, cornering Flutterina in the dining room. Flutterina attempted to flee, but Shadow Weaver had helped Glimmer to place a trap spell at the entrance, imprisoning Flutterina.

Rather than staying silent until an opportunity presented itself to escape and transform into another trusted person to slip away, Flutterina immediately revealed her sources and methods. She unveiled her shape-shifting abilities, how she had transformed into different Princesses during the battle of Dryl in order to give sabotaging orders, and also revealed that Flutterina was actually Double Trouble in disguise, working for Catra.

Finally, Double Trouble revealed sensitive information about the Horde. Instead of leaving the Princesses ignorant and inactive until word reached them, Double Trouble willingly told them early about how the Battle of Salineas had already taken place, that Salineas had fallen to Hordak, and that the Horde was surging through the gate and taking the seas even now. Double Trouble outright gloated about how the entire exercise was merely to stall the Princesses until the battle was over, revealing yet more methods.

Crestfallen over the loss of Salineas, a devastated Glimmer and friends teleported directly there, where Mermista broke down at the sight of her fallen and ruined city. Enraged, Glimmer vowed to reclaim Salineas and all of Etheria, even as Hordak and Catra celebrated their victory. Out in space, meanwhile, Horde Prime is seen leading his armada inside his massive ship, then suddenly grins sinisterly.