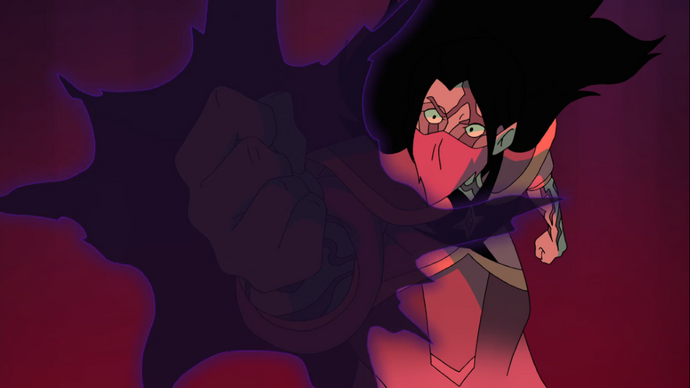 White Out
Reunion
Light Spinner is the sixth episode of Season Two and nineteenth episode overall of She-Ra and the Princesses of Power. It was released on Netflix with the rest of the second season on April 26, 2019.

While imprisoned in the Fright Zone, Shadow Weaver recollects her past as Light Spinner - a powerful sorcerer who was teacher and confidant to Glimmer's father King Micah. Hordak gives Catra a difficult ultimatum.

In the Fright Zone, Hordak was working on his armor when Catra walked into his sanctum. He commanded Catra to send Shadow Weaver to Beast Island, but she protested saying that she could still get more information from the prisoner. Entrapta dropped in during a brief power cut to explain that she's been integrating First Ones' tech into Hordak's portal machine's mainframe, which caused a massive power surge. Hordak then gave Catra two more days to get information from Shadow Weaver then send her to Beast Island.

While in her cell Shadow Weaver remembered teaching young Micah the fundamentals of sorcery. The pair steal lunar crystals from Mystacor's lunarium and pulverize them into a glowing dust that they use in spell casting. She then showed Micah some images of the destruction done by the Horde. Next day, Shadow Weaver addressed the sorcerers and demanded to use the Spell of Obtainment to fight the Horde. Norwyn, the former leader of Mystacor, rejected her plan saying that the spell is dangerous and uncontrollable.

In the current time, Catra visited Shadow Weaver to try and convince her to help Hordak and save herself. Shadow Weaver asked Catra to bring her old Sorcerer's Guild badge, which she later did, hiding it in Shadow Weaver's food. Shadow Weaver used some magic stored inside the badge to escape the Fright Zone with a spell.

In another flashback, Light Spinner and young Micah cast the Spell of Obtainment. The spell went wrong, causing destruction. It enveloped Light Spinner though she fought against it. Norwyn and two other sorcerers arrived and demanded to know what was going on. Light Spinner attacked the two unnamed sorcerers and enveloped Norwyn in her magic. Then she transported herself to The Fright Zone and joined the Horde.

When Catra returned to Shadow Weaver's cell and found it empty she fell into a tearful rage. Meanwhile, in Bright Moon, Bow, Adora and Glimmer tried to boost the transmission Bow received on his tracker pad. Adora read the transmission, which is in First Ones' writing, as "Serenia, Portal, Mara".

Retrieved from "https://she-raandtheprincessesofpower.fandom.com/wiki/Light_Spinner_(episode)?oldid=48329"
Community content is available under CC-BY-SA unless otherwise noted.