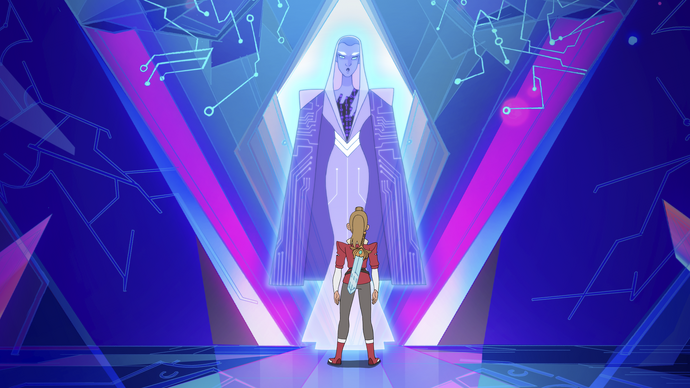 Promise
The Battle of Bright Moon

Light Hope is the twelfth episode of Season One of She-Ra and the Princesses of Power. It was released on Netflix with the rest of the first season on November 13, 2018.

Swift Wind comes to Bright Moon, Entrapta decrypts the First Ones' Data Crystal, and Light Hope reveals to Adora the history of She-Ra and Etheria.

After being abandoned by Catra in the Crystal Castle, Adora was able to let go of her past and was finally able to meet Light Hope who told her about the First Ones and the legacy of She-Ra.

Light Hope revealed to Adora that she is meant to be the defender of all Etheria, and tried to convince her to remain in the Crystal Castle so that she can train as She-Ra and develop her powers.

Although it is unclear when, Light Hope placed Adora in a trance after she entered the Crystal Castle, projecting herself and the simulated events of the previous episode into Adora's mind. Glimmer and Bow were able to gain entry to the Crystal Castle using Swift Wind's connection with Adora. Swift Wind then entered the dream-like state that Adora was in and helped her to regain consciousnesses and escape.

Meanwhile back in the Fright Zone, Entrapta learned more about the First Ones by studying a First Ones' Data Crystal. She discovered that the First Ones' technology is integrated throughout the entire planet of Etheria, with the five elemental runestones acting as access points to the planet's magic.

When Hordak discovered this he encouraged Catra to use the Black Garnet runestone in an attempt to gain an upper hand over the rebellion - but Shadow Weaver jealously guarded it against Hordak's command and used her magic to immobilize Scorpia and Entrapta.

A fight ensued between Catra and Shadow Weaver which ended after Catra clawed out the piece of Black Garnet that was embedded in Shadow Weaver's mask. Now powerless, Shadow Weaver was taken to a detention cell and Entrapta was able to examine the runestone.

Entrapta began her experiment on the Black Garnet, zapping energy from the other runestones and causing severe disruptions to the balance of Etheria. This caused planet-wide weather disturbances and the near destruction of the Whispering Woods, leaving Bright Moon open to a massive Horde attack.

Retrieved from "https://she-raandtheprincessesofpower.fandom.com/wiki/Light_Hope_(episode)?oldid=50529"
Community content is available under CC-BY-SA unless otherwise noted.