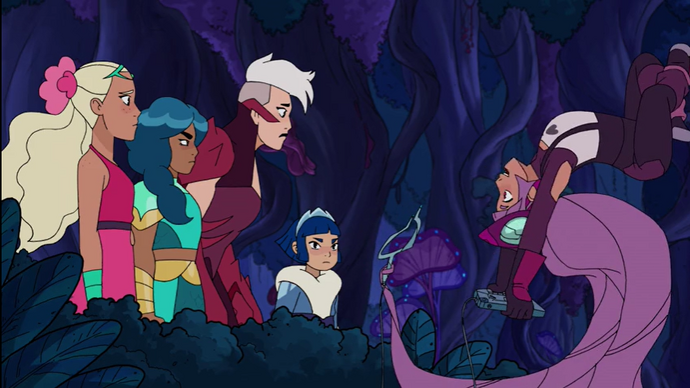 Horde Prime
Corridors
Launch is the second episode of Season Five and forty first episode overall of She-Ra and the Princesses of Power. It was released on Netflix with the rest of the Season Five on May 15, 2020.

While Adora takes a much needed rest, Mermista reluctantly leads the princesses into The Fright Zone so Entrapta can try to trace Horde Prime's signal.

A Horde Prime hologram addressed all the people of Etheria, demanding that they turn She-Ra over to him or suffer the consequences. Adora, struggles with the fatigue of having a normal body, so Bow insists she gets some rest, which Adora reluctantly agrees to. King Micah, Frosta, and Swift Wind barge in, wondering if she had a plan for saving Glimmer and worrying about Horde Prime's message, but Bow kicks them all out, throwing Entrapta out of the tent in the process.

While Adora took her well earned rest the Princesses held a planning session to save Glimmer. Most of the Princesses were hesitant to welcome Entrapta back into the group due to her single-mindedness and the fact she joined the Horde, but Scorpia vouched for her, saying that she has a good heart and insisting they give her a chance, to which Mermista reluctantly agrees. Mermista offers to let Entrapta go to space if she helped save Glimmer, which Entrapta enthusiastically accepted.

On Horde Prime's space station Catra was caught near Glimmer's cell by a clone, who chastised her. Horde Prime sensed this and possessed the clone, using his body to remind Catra that he was in charge. Once un-possessed the clone opened Glimmer's cell and escorted the Queen to Prime's trophy room. There he bragged about destroying countless worlds in order to create his own twisted sense of order. Glimmer desperately explains that activating the Heart of Etheria would destroy "everything". But Prime is pleased by this, he liked the idea of destroying the universe to eliminate pain and war so that there could be a new beginning for the universe. He offered to spare Micah if Glimmer would deliver She-Ra to him. Glimmer rejected his offer emphatically, smashing on of his prized trophies.

While sleeping Adora had a dream/vision of She-Ra. With Mermista in charge Entrapta led several other Princesses to one of Prime's spires where she believed that they could discover Glimmer's location by hacking into the spire's computer. The Princesses sneaked past many of the bots but Entrapta wondered off and walked into a bot which activated the spires defenses. This created a heated exchange where Entrapta realized that people were mad at her for joining the Horde and her perceived lack of empathy. Entrapta admitted she has poor people skills and thinking if she used tech to help them, they would like her, and with reckless abandon rushed toward the spire to get the signal and find Glimmer's location. Mermista blessed her plan and sent Scorpia and Frosta as Entrapta's back-up while she and Perfuma distracted the rest of the bots. Entrapta hacked the spire, discovered Glimmer's whereabouts and found out that Prime was sending reinforcements to Etheria.

Adora chased her vision of She-Ra and talked with her about her doubts, regrets and whether or not she had a destiny, the She-Ra vision did not respond. Upon awakening she learned about Prime's reinforcements, Mermista told her to leave to rescue Glimmer quickly. With the Horde bearing down Micah used magic to disguise himself as She-Ra and drew the bots away from Mara's ship while Bow, Adora and Entrapta left in Mara's ship, leaving Mermista in charge.

Catra visited Glimmer in her cell, after initially yelling at Catra she apologized and asked her to stay. And the pair shared a moment, separated by the force barrier.