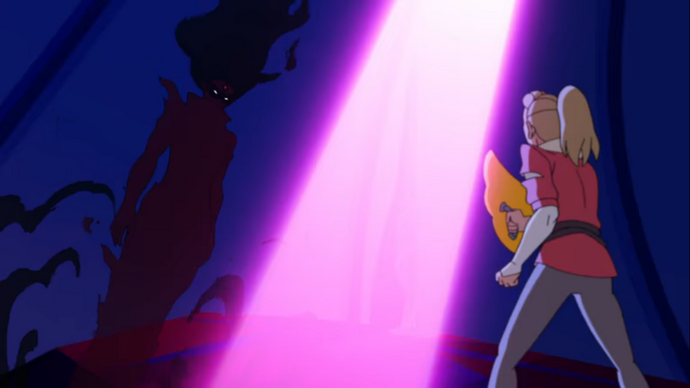 In the Shadows of Mystacor

In the Shadows of Mystacor is the seventh episode of Season One of She-Ra and the Princesses of Power. It was released on Netflix with the rest of Season One on November 13, 2018.

Glimmer takes Adora and Bow to the secret sorcerers' realm of Mystacor for a vacation, but Adora's nightmares of Shadow Weaver persist.

Unaware of Shadow Weaver tracking her with the Shadow spy, Adora stresses out while Glimmer takes her to the hidden kingdom of Mystacor guarded by her aunt, Castaspella. Whenever Adora tries to relax at her friends' request, she keeps believing that Shadow Weaver is in the kingdom, which everyone tells her is impossible. As a ceremony to renew Mystacor's barrier draws near, Shadow Weaver enacts a plan by using a Shadow spy to disrupt the ritual while isolating Adora for capture.

The shadow spy tracks Adora into Mystacor and stalks here there. Adora tries to relax and get to know Castaspella and her kingdom, but Shadow Weaver uses the shadow spy to attack Bow, Glimmer, Castaspella and other sorcerers during the restorative ritual. The shadow spy had created an illusion taking the form of Glimmer and Bow that told Adora to leave Mystacor, which she started to do before hearing the commotion in the lunarium. Adora finds the shadow spy trying to interrupt the ritual, but She-Ra transforms the Sword of Protection into a shield and uses it to redirect the eclipse energy; recharging the magical enchantments that protect the kingdom.

See: In the Shadows of Mystacor/Transcript

Retrieved from "https://she-raandtheprincessesofpower.fandom.com/wiki/In_the_Shadows_of_Mystacor?oldid=46194"
Community content is available under CC-BY-SA unless otherwise noted.