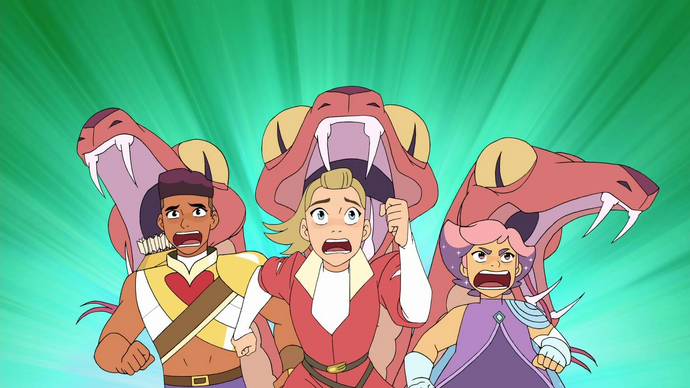 Arriving in the Crimson Waste, Glimmer assures Adora's concerns that her mother Angella will disapprove of their mission by saying that she simply didn't tell her mother at all. While walking, Bow comments on how the waste is not so bad, until a bird that flies by them becomes miraculously frozen when landing upon a bush, frightening Bow, to which Adora says they must press on despite their fear for The Rebellion. Adora asks Bow where to go, but his tracker pad is fried, so she uses her training in the Horde to decide on a direction with magnetized needle; coming from the North, they head South to bisect the center of the waste. En route, Glimmer notices a long-dead Horde Soldier by some ruins.

In the Fright Zone, Hordak nearly successfully create a portal, having established a sufficient power level and accounted for power surges via rewiring the power grid, but the portal explodes anyway. Entrapta is baffled and, assuming that their tech specifications to have been adequate, guesses that the only thing preventing the portal from opening is some sort of "key" which she hopes Catra shall recover from the Crimson Waste. Hordak however says the experiment is a failure, even after only one test, and orders Entrapta to leave.

Back in the waste, The Squad is running away from three massive snakes until they fall into a dry ravine. Glimmer is frustrated that she cannot simply teleport to the center of the waste, and ends up falling into quicksand. Adora jumps in to "save" her, only for Glimmer to teleport out of the sand, and then has to teleport back into the quicksand to teleport Adora out of it. The Trio heads for shelter, suddenly stumbling upon a seedy bar in the waste filled with people. When asking for help, two patrons prepare to attack the trio until Huntara, the Princess of the Crimson Waste, throws them out, citing the two rules of the Crimson Waste, the second being not to disturb her when she eats. Adora tries to recruit Huntara as a guide, and she agrees. Meanwhile in the Fright Zone, Entrapta discovers Hordak without his mechanical suit on, and rushes to help him when he collapses.

Huntara begins guiding the Squad through the waste, with Adora trying to befriend Huntara. Bow and Glimmer try to keep their suspicions quiet, but eventually reveal that they are concerned about being taken the wrong way, until Huntara announces that they have arrived. At the center is only a rock, and Adora is confused until they begin getting shot with paralyzing darts from hidden snipers, and it is revealed that Huntara betrayed them.

Once more in the Fright Zone, Entrapta has taken care of Hordak and demands to know what he is, seeing that his armor his "keeping (him) together" and that he is clearly from another planet. He reveals that he is a clone of Horde Prime, who cloned himself uncountable times in order to conquer planets and even other galaxies. Hordak was his top general, but being defective, Prime sent him to the front lines to die; only he didn't, instead miraculously entering a Portal and landing in Etheria. With only a ship he built an army strong enough to challenge all of Etheria, and seeks to build a portal to bring the rest of the Horde to Etheria so that he can show Horde Prime that he has value. Entrapta then rushes off to get tools for an idea.

In the waste, Glimmer eventually manages to teleport them out of the hole they were left in by Huntara, but Adora is dejected, needing answers about herself. Bow reassures her, and they press on, following Huntara's footprints.

Entrapta, together with Hordak, is busy preparing a solution, and although Hordak tries to tell her to leave, that he does not need her help, she says that "Imperfection is beautiful…at least to me", reassuring him that being flawed is not so horrible and that everyone needs help sometimes. She tells him not to think of himself as a failure, as she is a failure too, considering that Adora abandoned her and she doesn't see Catra anymore. Despite that, with her scientific research she is content, and imperfection is what make scientific inquiry all possible. She then sets her machines to work, using First Ones' tech to build Hordak a new suit of armor which acts as an exoskeleton that supports his natural organic body. Feeling powerful, Hordak struggles to thank Entrapta, awkwardly saying that anyone who discounts her are utter fools, to which Entrapta says she likes being his friend, too.

As Huntara and her compatriots sit around a fire, Glimmer and Adora ambush them, with Bow laying down fire as Adora duels Huntara for her sword. Bow and Glimmer successfully incapacitate Huntara's allies, and then steal the sword from her, returning it to Adora. Adora recognizes Huntara as a former Horde soldier, and from her they learn that she deserted the Horde due to what they were doing, just like Adora did. Adora tries to convince Huntara to join them, only to discover that Huntara's allies had overpowered Bow and Glimmer while they watched and now hold them hostage. Given the chance to flee, Huntara instead throws her old allies off of them and joins Adora, taking her to Mara's Ship in the center of the Crimson Waste.