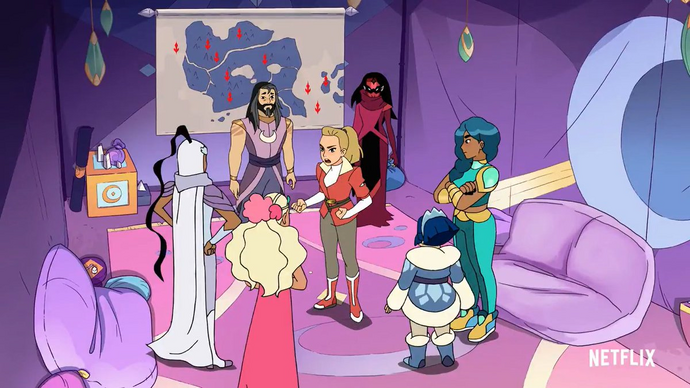 Horde Prime is the first episode of Season Five and fortieth episode overall of She-Ra and the Princesses of Power. It was released on Netflix with the rest of the fifth season on May 15, 2020.

Adora, together with Micah and the princesses search for a way to fight back and to rescue Queen Glimmer. On Horde Prime's flagship, Catra schemes.

As the Galactic Horde's bots and invasion spires land on Etheria, Adora, Mermista, Frosta, Bow and Perfuma lead villagers to safety. From his space station Horde Prime observes Adora and the rescue. While the Etherians take cover under a tent of protective spells, the heroes' plan their rescue of Glimmer using Mara's ship. In the meantime, they choose to stay undercover, having abandoned Bright Moon. They focus on getting intel through reconnaissance and getting as many people to safety as possible. On Horde Prime's space station Glimmer struggles to use her powers while imprisoned. Catra pledges herself to follow Horde Prime then goes and harasses Glimmer. The pair had dinner with Horde Prime, where he revealed how his plan to conquer Etheria would play out. Both women were visibly distressed when seeing the destruction on Etheria. Later he tells Catra that he doubts her usefulness, and claims that she and all Etherians are weak because of their strong connections to each other. While Adora attacked three clones Scorpia stung her unconscious to save her life since they were losing and needed to retreat; then she profusely apologized and said that she'd do it again if needed. Bow, Scorpia, Adora and Swift Wind captured a horde clone while bots attacked their hideout. They abandoned the clone and returned to camp. After holding off the bots they retreated to a magically protected place that Madame Razz had taken Adora previously, the deepest part of the Whispering Woods.

Retrieved from "https://she-raandtheprincessesofpower.fandom.com/wiki/Horde_Prime_(episode)?oldid=38719"
Community content is available under CC-BY-SA unless otherwise noted.