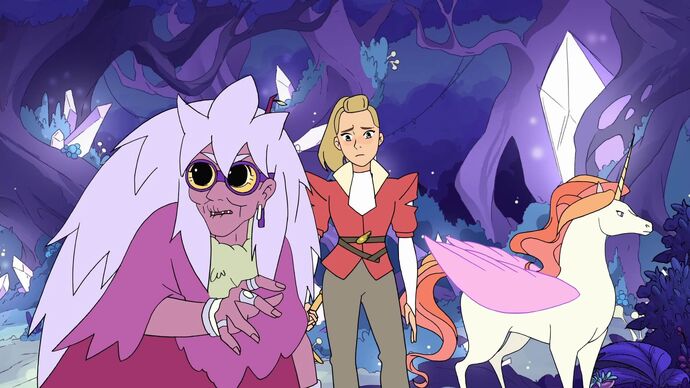 Boys' Night Out
Fractures
Hero is the ninth episode of Season Four and thirty-fifth episode overall of She-Ra and the Princesses of Power. It was released on Netflix with the rest of the fourth season on November 5th, 2019.

Razz confuses the past and the present and has trouble telling Mara and Adora apart. But Adora desperately needs her help.

Centering on Razz and her experiences between the present and approximately a thousand years in the past, Razz mistakes both Mara and Adora for the other and insists they both help her make a pie. While Madame Razz looks for a rolling pin (even as Mara tries to back out of helping), time switches to the present and Adora enters, back from Mara's ship while Bow continues trying to fix it.

Adora asks Razz about a weapon that Mara had mentioned in her holograms, getting no answers. Swift Wind then arrives, apparently a friend of Razz's, and Razz leaves in search of sugar and berries. Adora tries to follow but she soon gets lost, and when Razz calls for Adora to hurry up, time switches back a thousand years; Mara is now right in front of Razz holding her at sword-point.

Unruffled, Razz walks past her into a classified area, her ship, and starts rummaging around for sugar. Mara becomes entranced by Razz's use of magic until Light Hope arrives, who Razz proceeds to attack with her broom. Light Hope demands she be detained per the Heart of Etheria Project, but Mara convinces her to override her programming, letting Razz go on her way with her sugar.

As Razz leaves the ship, time switches again and Adora catches up with her, Mara's ship long gone. However, a First Ones' ruin is still there, and Razz finds sugar there while Adora finds a shard of First Ones' tech, which Razz confirms was left for her. Adora questions her further, but while Razz tries to remember, time switches once again and she dodges a rampaging beast. Mara tries to drive it off, but Razz has to calm it, teaching Mara to connect with it via her magic. Razz teaches Mara to use magic to mend the damaged forest as well, even without her sword, telling her that "She-Ra is not the sword, She-Ra is you".

Razz tells Mara that She-Ra existed before the First Ones arrived, that magic cannot be controlled, even though her superiors told her that her sword was supposed to control She-Ra's magic. Mara questions whether her duty would be to serve her people or to protect Etheria, and Razz tells her that her people "made the sword, but they did not make She-Ra", and that She-Ra protects Etheria.

Time returns to the present, where Adora has been listening intently to all that Razz said, asking which "people" she was referring to. Razz begins to cry as the memories surface, having waited so long for Mara to return as she promised. She tells Adora about Mara's warning, that "there is a great evil at the Heart of Etheria", and tells her to talk to Mara before rushing back home.

Razz puts her pie in as Adora questions her more. She tries to remember, until time changes once more and a wounded Mara stands before her. Mara says she found what the First Ones were doing to the Heart of Etheria, and promises to make the pie tomorrow before running out to "keep them from hurting anyone else".

As Mara staggers away, she sinks her sword into the ground abandoning it, screaming in pain before walking away. Power surges forth from the sword until time returns to the present, where the pie has finished baking. Adora and Swift Wind, who had fallen asleep, follow Razz as she rushes through the forest. Time flickers rapidly as Razz runs after Mara, while power surges from the planet, even as Razz rushes along the same path with her pie in the present.

Razz emerges from the woods before Mara's ship in the present, where Bow is working on it, and rushes aboard while Adora and Swift Wind follow. On the ship, Razz implores Adora to "talk to Mara". Adora places her First Ones' tech shard in the console of ship, and it comes to life, with a hologram of Mara manning the controls.

Time returns to a thousand years prior, with Mara piloting the ship in the flesh. Light Hope appears, wondering why Mara destroyed her intraplanetary systems and is attempting to disable her. Mara claims that with the sword gone, there will not be another She-Ra, but Light Hope is confused. She says that the Heart of Etheria is active, that Mara will fulfill her destiny and become a hero, bringing peace throughout the galaxy. Light Hope assures her that despite her efforts, the Heart of Etheria, and Mara, will achieve their functions, their destiny.

Questioning how destroying worlds could bring peace, Mara accuses Light Hope of not being the real Light Hope. She replies that "I am the same basic operating system", at which point Mara disables communications and teleports Etheria into Despondos. Time then returns to the present, where the hologram of Mara speaks to Adora. Time flickers as Mara explains that the First Ones were rerouting Etheria's magic to its core, ostensibly for an energy source, but in actuality to be used as a weapon capable of unfathomable destruction. She-Ra was the key to its activation.

Mara explains that she saw the deaths that would follow if the weapon remained active, that she could not stop them before, but with Etheria in Despondos it could not be used to hurt anyone else. She says that the Heart of Etheria is continuing to store magic, but it is unstable, and would destroy the planet if used once more. As her ship entered the atmosphere and hurtled toward the ground, her last words were that she believed in Adora, and that she could "save the world we love". Her ship then landed in what would become the Crimson Waste, and the recording ended.

Razz then leaves the pie she made on Mara's throne, "for you, Mara, dearie".

Retrieved from "https://she-raandtheprincessesofpower.fandom.com/wiki/Hero?oldid=50477"
Community content is available under CC-BY-SA unless otherwise noted.