The Heart of Etheria

Vast amounts of Etheria's magical energy is absorbed and stored inside the planets core.

When it is activated, the magical energy in the core will forcibly transfer into She-Ra, the only being powerful enough to withstand it, before being fired through the Sword of Protection.

In order for the Heart of Etheria to function, all the Elemental Princesses of Etheria must be connected to their respective Runestones. This is because the Heart functions by using the Princesses as magical conduits through their Runestones.

Madame Razz revealed that the Heart of Etheria has been gaining strength over the past 1,000 years, so it is more powerful now than when the First Ones created it.

In the past, Madame Razz first met Mara after she arrived to study the magic of Etheria for a secret project called the Heart of Etheria. During her time there, Mara learned to harness magic herself but also discovered the grave, true nature of the Heart of Etheria Project and sacrificed her life to stop it. Razz leads Adora to Mara's recovered ship, where Mara had left and recorded a message for Adora at Razz's suggestion in the past. Mara explains that the Heart of Etheria is a weapon that has been siphoning magic from Etheria and storing it in the core. She was able to stop it from going off and tearing Etheria apart and chose to hide Etheria in Despondos. She made sure that the portal capabilities were no longer possible, so that the weapon could never be used on anyone. Lastly, she implores Adora not to trust Light Hope, who had been reprogrammed by the First Ones to activate the Heart at any cost.

The Heart’s activation required the planet’s balance, which was thrown off by Hordak’s arrival. Hordak did this unwittingly by seizing the Black Garnet and cutting off Scorpia, the heir to its power, from the Heart. This meant that the Heart of Etheria was no longer able to be used.

Glimmer who was desperate to defeat the Horde, ignored Adora and Bow's warnings and went to Light Hope. Light Hope instructed Glimmer to have Scorpia forge a connection with her Runestone to restore full functionality to the Heart of Etheria. After doing so, the Princesses were “supercharged” as a result of all the power unleashed from the Heart. When that power was funneled to the Sword Light Hope was able to open a portal and successfully bring the planet out of Despondos. Adora begs Light Hope to stop, but she glitches between her original and reprogrammed self, lamenting that Mara would not want this and that she is not as strong as Mara. Adora manages to use the gathered magic within her to shatter the Sword of Protection's blade, thus stopping the weapon. Light Hope thanks Adora and fades away.

Horde Prime learns of the heart's existence from Catra and decides to harness its power for himself.

Horde Prime seeks to obtain the power of the Heart, for this he uses images of his friends in danger so that Glimmer tells him that he needs She-Ra to make it work. Even knowing that the Heart could destroy the entire universe, Prime is pleased with such a result.

George and Lance discovered a copy of Light Hope and a message from Mara's time detailing the existence of a failsafe for the Heart located in a place named "Arxia". Shadow Weaver and Castaspella discover that this place is located below Mystacor. There, Shadow Weaver reveals that the failsafe is a code stored in the Crystal of Arxia and must be transferred into the body of a willing soul that absorbs all the magic gathered in the Heart and releases it. However, She-Ra is the only one strong enough to survive it and that if she cannot transform, Adora would die in the process. Still, Adora decides to carry the failsafe on her body.

In the end, Horde Prime discovers a way to get to the Heart without using She-Ra. However, with the support of her friends and Catra confessing her love, Adora manages to use failsafe to unleash the magic of the Heart, which intensified the beauty of the planet and destroyed Horde Prime.

Horde Prime's scanners detect the great power of the Heart 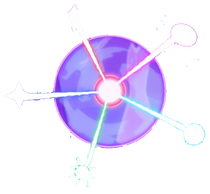 Hologram of Heart as seen in the Crystal Castle 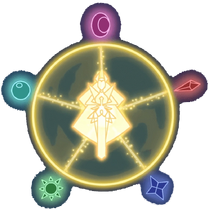 Computer Image of Heat as seen on Beast Island

She-Ra uses the Sword to cleanse the Heart of Etheria

Prime's virus reaches the heart
Add a photo to this gallery

Retrieved from "https://she-raandtheprincessesofpower.fandom.com/wiki/Heart_of_Etheria?oldid=43817"
Community content is available under CC-BY-SA unless otherwise noted.