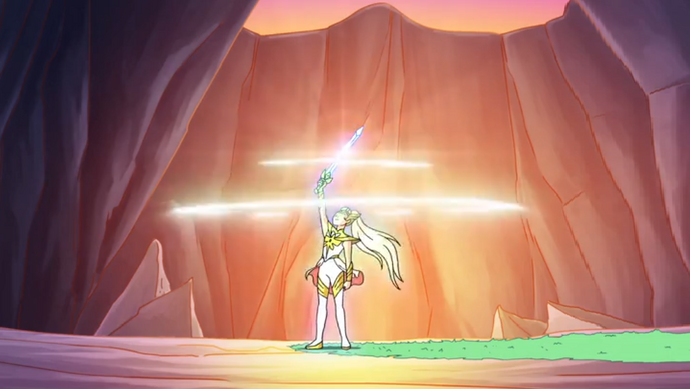 With Horde Prime having turned the First Ones defense systems against Adora and severely wounding her, Catra holds off a First Ones' guardian while Shadow Weaver ushers Adora toward the Heart of Etheria to activate the fail-safe. At the same time, Glimmer is still out in the field distracting her chipped father so that Bow can activate Entrapta's program to free everyone who has been chipped. In the midst of his power, Micah unleashes blast after blast of ruinous dark magic at his daughter while she desperately teleports away, eventually ensnaring her with it with contemptuous ease. In the Horde outpost itself, Scorpia unleashes her own electrical magic at Bow until Melog enshrouds him in invisibility and keeps him safe.

Back on the field, Glimmer is held helpless by her father's overpowering magic, begging him to snap out of it. However, Micah has nothing but derision for his daughter, calling her a weakling and a failure before smashing her to the ground and mocking her "weak" and "pathetic" inability to fight him off. Glimmer then has a vision of her mother, and begins rapidly teleporting around Micah while blasting him with minor strikes that only shove him around a bit. Enraged, Micah unleashes a vortex of potent magic that Glimmer simply walks through. She makes a speech in the middle of magical combat, and then uses a sorcerer symbol to incapacitate her father.

While under the cloak of Melog's invisibility, Bow continues the deployment Entrapta's program to deactivate all the chips on Etheria. Scorpia is unable to detect him until he shouts out in glee when the program activates, allowing her to blast him and Melog away from the terminal and back into visibility. He talks to Scorpia and absolves her of guilt for anything she did while under Horde Prime's influence, to the point where she is able to resist fighting him for just a second, time enough for him to finally deploy the program and deactivate all of the chips.

Light surges from the Horde outpost, and all around the planet the chips fail and detach from the necks of their hosts. Mermista is freed in Sea Hawk's arms, Huntara is freed, Admiral Scurvy and his crew are freed, the citizens of Elberon are freed, and finally Scorpia herself is freed along with everyone else. She, Melog, and Bow all hug in joy even as, far above in Horde Prime's ship, Entrapta herself laughs in glee as her program registers on the ship's monitors. Angry, Prime deploys all his clones to overwhelm the planet. As he does, Bow takes over the communication channels to give a speech to Etheria, calling for them to rally and fight off the Horde just as a flood of pristine clones are beamed to the surface.

Meanwhile, Catra has finally defeated the First Ones guardian when Horde Prime assumes more control of the ancient First Ones infrastructure on the planet. He appears before Catra in a hologram and distracts her long enough for him to goad the guardian back into action, taking Catra by surprise. While this happens, Shadow Weaver arrives with Adora at the Heart of Etheria, and begins to feel the pulsing magic there, magic that she could assume for herself and finally be restored to power. However, Adora hears Catra scream and turns back, leaving Shadow Weaver faced with a difficult choice - the magic, or Catra.

Just as Catra is about to be eaten, a blast of dark magic thunders out of the tunnel and knocks the guardian back, freeing Catra. Surrounded by the power of her own life magic, Shadow Weaver launches blast after devastating blast of dark power at the guardian, holding it at bay long enough for her to ensnare it in a rope of magic. However, Catra did not listen to her warning to take Adora and run, so Shadow Weaver blasts Catra back into the tunnel with Adora and raises a barrier to keep her there.

Shadow Weaver begs Catra to leave and get Adora to the Heart to activate the fail-safe and free the magic for the Etherians, even as she struggles to hold the guardian at bay. However, Catra fears that the effort will kill her, but Shadow Weaver accepts that it is too late for her and tells Catra how proud she is of both Catra and Adora. As Adora arrives, Shadow Weaver removes her mask and looks on at the two girls she practically raised as daughters. Just before unleashing the last of her magic, she smiles and tells them "you're welcome", at which point she explodes in a blast of magic that kills her and the guardian.

The barrier before Adora and Catra dies with Shadow Weaver. Sobbing, they leave behind Shadow Weaver's shattered mask and make for the Heart of Etheria. Meanwhile, the Etherians have taken the fight to the clones, much to Horde Prime's irritation. Entrapta takes the opportunity to mock him, her impassioned speech beginning to move Hordak nearby.

Catra carries Adora by main strength to the Heart of Etheria, a massive nexus of flowing power deep beneath the earth. Adora prepares to become She-Ra to destroy it, but is unable to do so due to the infection setting into her wounds from Horde Prime's virus. Adora knows that the fail-safe will work with or without She-Ra, however, she'll simply die in the process if she uses it in her normal form. She makes peace with it and prepares to sacrifice herself, but Catra refuses to leave, and stays with her as she goes to her death.

At that moment, Horde Prime assumes full command of the Heart of Etheria at last. Entrapta protests that the Heart is unstable, so Horde Prime commands Hordak to kill her and assures himself that his realm would return to perfection soon. However, he notices Hordak hesitate to shoot a cowering Entrapta and orders him to kill her immediately, at which point Hordak turns on Horde Prime and blasts him completely through his control panel to the edge of the platform. Hordak then lifts Horde Prime up, angrily ranting as he prepares to kill him:

Hordak drops Horde Prime into a chasm, his body dying in the process. Entrapta shouts in glee until suddenly Horde Prime's laughter emanates from Hordak; he has transferred bodies and taken over Hordak's vessel (his eyes pupils change to white again). Bemused, Horde Prime grabs Entrapta by the hair and beams himself and her down to Etheria itself, where he intends to use the Heart whether it kills them all or not.

On the planet below, the princesses are beleaguered by a hail of green blasts from Horde Prime's clones. Netossa holds them at bay with a net while the rest of the princesses return fire, until Scorpia and Bow arrive to help. They rejoice in being together until Horde Prime appears on a bluff above them, foretelling the destruction of the planet when the Heart of Etheria is used.

Meanwhile, Adora passes out and has a daydream of what could be, Catra, Bow, and Glimmer living happily together with Adora in Bright Moon and are about go to Scorpia's first ball. However as Adora reaches out to Catra's hand, Horde Prime appears in the daydream and derides it as "a beautiful wish" that she will never have. However, Catra calls out to her and professes her love for her, so Adora wakes up and is suddenly able to summon a shield to protect them both from a surge of power from the Heart of Etheria. She dispels it, professes her own love for Catra in return, kisses her, and then transforms into She-Ra at last.

As she transforms, the fail-safe is finally activated, destroying the Heart of Etheria the First Ones created so many years ago and sending the magic thundering back to the princesses. This halts the destructive wave of energy that was tearing up the planet's crust just before it reaches the cowering princesses. Motes of light flood the space, and She-Ra arrives, using the restored Etherian magic to heal the damage done to the planet's crust, covering it in greenery while also transforming Horde Prime's massive command ship into a tree floating in space.

She-Ra then comes before Horde Prime who vows he will return only for She-Ra to correct him saying his reign is over and banishes him from Hordak's body with a surge of magic, killing him, ending the threat of the Horde once and for all. Hordak is restored, remembering the day when he first found Adora as a baby, and seeing this Entrapta rushes to him and embraces him. Glimmer and her father embrace, Netossa and Spinnerella kiss, Scorpia forgives and hugs Catra, Mermista is happy to be reunited with Sea Hawk, but questions Entrapta and Hordak's relationship and She-Ra transforms back into Adora to look out on the now-healed Etheria, while Madame Razz is overjoyed by the state of Etheria and sighs contentedly, commenting that Mara would be proud.

Adora and Catra embrace, glad that everything is finally over, and they along with Bow and Glimmer lay on the grass. Bow ask what are they going to to now and Adora vows to bring magic back to the universe; prepossessing a "Best Friends Squad Road Trip" all of which happily agree.

Retrieved from "https://she-raandtheprincessesofpower.fandom.com/wiki/Heart_Part_2?oldid=46800"
Community content is available under CC-BY-SA unless otherwise noted.