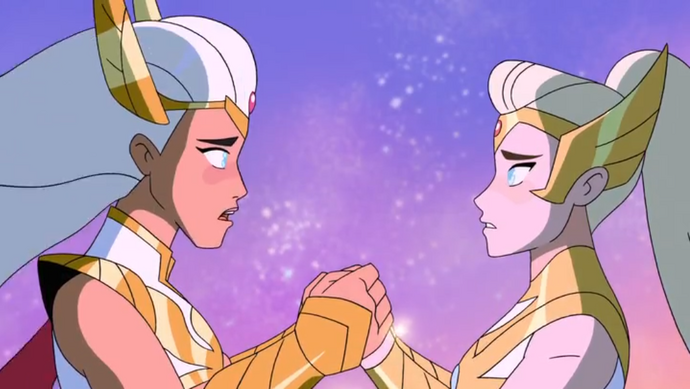 Failsafe
Heart Part 2
Heart Part 1 is the twelfth episode of Season Five and fifty first episode overall of She-Ra and the Princesses of Power. It was released on Netflix with the rest of the fifth season on May 15, 2020.

The best friend squad heads for the Heart while the princesses attack the spire so Entrapta can disrupt the chip network. Horde Prime makes his move.

The remnants of the Rebellion are gathered and happily talking when Adora transforms into She-Ra and comes before them. She gives an assessment of the dangers should Horde Prime gain the Heart, and their situation, with most of their friends and allies chipped and under Horde Prime's strengthening control. However, Entrapta has an idea to broadcast a jamming frequency to block out Horde Prime's connection to the chips, deactivating them and freeing everyone from Horde Prime's control. She-Ra's plan is for everyone present to get Entrapta to the Horde's spire and keep Horde forces at bay while Entrapta works, with She-Ra herself going to the Heart of Etheria to use the fail-safe.

As everyone applauds She-Ra's plan, she looks on Shadow Weaver hiding in a corner, and begins to doubt herself, her form flickering between Adora and She-Ra. She leaves the base just as the She-Ra form flickers and dies, turning her fully back into Adora. As this happens, Bow and Glimmer come after her and assure her that they will accompany her to the Heart, which cheers her enough to be able to recall the She-Ra form once again. Together, they all go to the Crystal Castle, now dilapidated and run by a malfunctioning default hologram without Light Hope to run it. Using the secret phrase "friends of Mara", the default hologram acknowledges them and grants them access deeper into the Castle - to the Heart of Etheria.

Meanwhile, as Catra rides into the wilds on Melog's back, Melog suddenly halts and sends Catra flying forward. Catra becomes enraged and declares that she won't go back, at which point Melog simply sits on her and pins her down, prompting Catra to launch into an angry tirade about how Adora supposedly chose Shadow Weaver over her. Although she insists Adora doesn't want her, she eventually admits to Melog that Adora actually just doesn't have romantic feelings for her , at which point Melog lets her up. They embrace, but suddenly become invisible when Melog hears a clone nearby. The clone walks past, none the wiser, and Catra decides to shadow him.

The princesses arrive at the spire with an all out assault, blasting several ships from the sky and laying waste to numerous bots, drawing the Horde's full attention as Entrapta, Wrong Hordak, and Swift Wind fight their way to the spire relatively unmolested. While the battle rages, the Best Friends Squad continues into the earth toward the Heart of Etheria, plagued by visions of Catra, created of She-Ra's own wants and desires. She-Ra resolves to not be distracted, even as her form flickers between She-Ra and Adora again.

Meanwhile, Catra follows a clone to an excavation site where Horde Prime's clones are accessing the Heart of Etheria via a drill into the earth. Horde Prime himself then assumes command of the clone Catra was following, and gives a speech to his clones about taking control of the Heart of Etheria and finally defeating She-Ra once and for all. His clones both on the ground and in space chant a mantra in response, at which point he begins the acquisition process, sending a shaft drilling downward to connect to a hole in the earth. Once connected, green light surges into the old First Ones architecture and throughout Etheria itself. Seeing this, Catra rushes to warn Adora.

She-Ra herself is plagued by her own memories, given shape by First Ones holograms. She finds herself staring at the Sword of Protection, and admits her fear that she's losing control of She-Ra, that her destiny truly is set in stone, whether the Sword is destroyed or not. She fears that she will lose She-Ra and die in the process of activating the fail-safe if she cannot control her emotions, and so forges on ahead alone, barely in control of her She-Ra form as it flickers and fades. Bow and Glimmer are left behind despite their protestations, but when the illusion around them dissipates, they see the Horde's green light taking over the corridor they're standing in.

Catra arrives at the Rebellion's old base only to discover everyone gone except for Shadow Weaver. Shadow Weaver begins to speak to Catra, but she angrily overrides her, tells her of Horde Prime's infection of the planet, and together they depart to help Adora. At the same time aboard Horde Prime's ship, he has just finished bypassing the First Ones security protocols and is 20% finished the acquisition process. He beams Entrapta up to his ship to gloat, stopping her from creating her jamming frequency, and a nearby Hordak recognizes her.

The battle outside the spire continues to rage until suddenly, a wave of clones from Horde Prime's ship beam down to the surface to engage the princesses in combat. However, they hold back and do nothing, their arrival distracting them long enough for Mermista to flood the battlefield and Scorpia to electrocute the princesses through it. With the battle briefly halted, a massive hologram of Horde Prime coalesces over the spire, who gloats over them all and reveals Entrapta in captivity, assuring them that eternal night awaits them before disappearing again.

Seeing this, Catra rounded on Shadow Weaver and ordered her to finally start using her magic again to get them to Adora quickly, and although Shadow Weaver is hesitant, she agrees. She creates a sigil that teleports her to the Crystal Castle, nearly fainting with weariness and ill health as a consequence. Catra then informs Glimmer and Bow of the situation above the ground following Entrapta's capture, Glimmer and Bow leave to support the princesses and activate the jamming signal, respectively, taking Melog with them to cloak Bow. While they do, Catra and Shadow Weaver stay to support Adora.

Glimmer, Bow, and Melog arrive at the spire via teleportation, with Glimmer hugging Bow goodbye (admitting their love for each other in the process) before departing for the battlefield. After this, She-Ra finds herself in yet another illusory landscape, looking out over a healthy, healed Etheria incongruent with the real world. Mara stands beside her, and although She-Ra assures her that her sacrifice will not be in vain, Mara says she never wanted to die, that the entire point of her own sacrifice was so that the future She-Ra would not have to sacrifice herself the same way. She-Ra claims it's better for her to sacrifice herself, to keep her friends safe and happy, but Mara asks what She-Ra herself wants, admonishing her that she deserves love too. However, the conversation is interrupted by the holographic arrival of Horde Prime, the illusion fraying at the edges with bursts of static as he assumes command of the First Ones infrastructure around them.

On the battlefield, the princesses are beleaguered by Mermista, Scorpia, and the rest of Horde Prime's forces. Perfuma suggests retreat, but they are totally surrounded by clones powering up their ray guns. Before they can fire and end the battle however, Glimmer arrives with a sorcerous pulse that knocks the clones aside. Mermista takes the opportunity to flood the field with a tidal wave, but Glimmer uses a sigil to keep the waters at bay. Castaspella then joins her, and together they reshape the magic to completely encapsulate the rushing waters in a sorcerous bubble, which they launch at Mermista and the clones, briefly halting the fight once more.

Seizing the opportunity, Sea Hawk stands before Mermista and begins to talk to her, and although she sends blasts of water in return, he is able to deftly dodge them all. He charmingly compares the attempts to when she tried to kill him at their first meeting, and although she eventually manages to grab ahold of his ankle and overbalance him, he suavely turns the fall into a lounge. His irritations finally get through to the real Mermista, who complains, "why are you like this?" Sea Hawk says it's because he loves her, briefly bringing Mermista's old, brown-colored eyes back, but the entire episode was ultimately just a distraction to allow Perfuma to incapacitate her. One of her vines strikes the chip on Mermista's neck, leaving her to fall floppily into Sea Hawk's arms, who asks her to forgive him when she returns to her normal self.

Meanwhile, Melog and Bow fight their way through the clones in the spire, swiftly cutting a path to Entrapta's setup from before he was abducted. Before they can quite reach it however, a bolt of electricity shot from Scorpia nearly kills them both. Glimmer intends to go help him, but when she turns around she finds all of her allies ensnared in dark magic; her father, King Micah, single-handily overcame the entire Princess Alliance and holds them motionless with his overpowering magic.

Back in The Crystal Castle, Horde Prime walks toward —and completely through— She-Ra, utterly ignoring her to focus his attention on Mara's still, holographic form. He muses on the fact that he cannot recall her face, like all of the She-Ra avatars before her that he fought against and defeated. After destroying her hologram, he commands a First Ones guardian to attack She-Ra, infecting her with the same virus he used to assume control of the other First Ones' tech and forcing her back into her Adora form. Horde Prime then departs, bidding goodbye to his "oldest enemy" as a horrible monster appears.

Retrieved from "https://she-raandtheprincessesofpower.fandom.com/wiki/Heart_Part_1?oldid=48251"
Community content is available under CC-BY-SA unless otherwise noted.