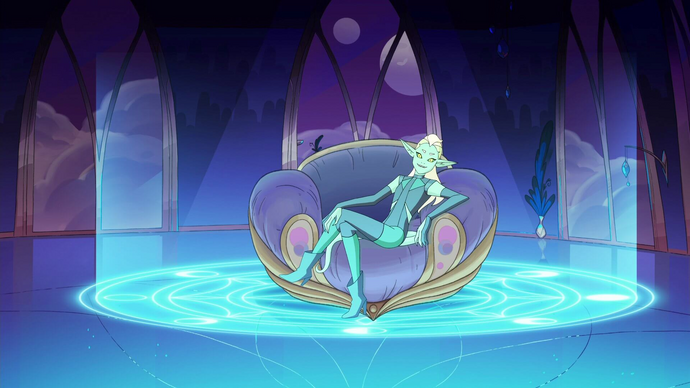 Hero
Beast Island
Fractures is the tenth episode of Season Four and thirty-sixth episode overall of She-Ra and the Princesses of Power. It was released on Netflix with the rest of the fourth season on November 5th, 2019.

The Princess Alliance is split on whether to use the magic at the Heart of Etheria or try to destroy it. Scorpia arrives to Bright Moon with a request for help to save Entrapta.

Shadow Weaver continues training Glimmer, attempting to teach her to use a truth spell on Double Trouble. However, Double Trouble's needling disrupts Glimmer's concentration, and Double Trouble further incenses Glimmer by mocking the fact that Adora had just called a war meeting; without Glimmer's authorization.

At the meeting, Adora presents to the Princess Alliance her projected result of using the Heart of Etheria; total destruction of the planet. They begin to discuss how to avoid its activation, but Shadow Weaver arrives and proposes channeling power from it, which Glimmer agrees would be a useful weapon against the Horde. She cites all of their lost territory, the Horde closing in on their capital, as justification to take the risk. Adora quickly becomes angry, so Bow calls for an intermission.

In the Fright Zone, Catra scours the Horde's surveillance systems for any trace of Scorpia, coming up with nothing. Lonnie, Rogelio, and Kyle return after working a double shift, Kyle badly injured, but Catra sends them back out on yet another mission despite their protestations. While the debate in Bright Moon continues, Scorpia arrives unannounced, intending to ask for help. Naturally, everyone immediately attacks her, and she flees from the castle while trying to reason with them, failing until she mentions saving Entrapta.

Meanwhile, Catra continues searching in vain until she hears laughter. She initially mistakes it for Scorpia, but it was actually just some Horde soldiers, so she pulls Lonnie in to question why they're laughing. When Lonnie explains that they just need sleep to be "ok", Catra breaks down over Scorpia's absence. She dismisses Lonnie, and when she fails to contact Double Trouble, she destroys her tablet in rage.

In Bright Moon, Scorpia explains Entrapta's exile to Beast Island, frightening Adora due to the horrible stories of the place that she heard as a child. Everyone immediately assents to a rescue mission to save Entrapta, especially so that she could help them disable the Heart of Etheria, but Glimmer orders Scorpia detained and teleports Bow and Adora away.

There, Glimmer pleads with her friends for caution, citing Entrapta's "treachery", the encroaching Horde being a higher priority, Entrapta's tendency to "explode" devices she tampers with, and the potentiality to use the Heart of Etheria to simultaneously defeat the Horde and save Entrapta. She implores Adora to at least learn how to access the Heart of Etheria, but when Adora fears an accident, Glimmer appeals to Bow to "explain it to her". Even though she takes his hand and he wavers, Bow refuses. Glimmer asks why he can't trust her, and he replies, "because you're wrong".

Enraged, Glimmer orders them to remain within Bright Moon castle, and Frosta carries out Glimmer's order to imprison Scorpia. In her "prison" she is afforded all manner of luxuries, Perfuma even giving her a salad, and Scorpia quickly befriends Frosta. At the same time in the Fright Zone, Catra maintains a straight face only long enough to report their military successes to Hordak, and afterward it is revealed that she destroyed her entire communications center. Catra then breaks down, sobbing uncontrollably.

Back in Bright Moon, Adora and Bow sneak out of the castle on Swift Wind, Frosta choosing to let them escape without reporting anything. They land outside Mara's Ship, and after some difficulty with takeoff, manage to direct the autopilot to fly to Beast Island, which the autopilot identifies as "Hazardous Materials Disposal Site".

Meanwhile, Glimmer successfully uses a truth spell on Double Trouble, who reveals the Horde's plans to invade Bright Moon and take the rest of Etheria. Double Trouble also reveals that Horde Prime is a much greater threat than Hordak, and when Glimmer goes to tell Adora and Bow, she realizes that they are gone. As she watches their ship fly away, she decides to let them go, and to talk with Light Hope herself.

Retrieved from "https://she-raandtheprincessesofpower.fandom.com/wiki/Fractures?oldid=45411"
Community content is available under CC-BY-SA unless otherwise noted.