She-Ra and the Princesses of Power Wiki
Register
Don't have an account?
Sign In
in: Episodes, Season 4 Episodes, Episodes that focus on Adora,
and 3 more 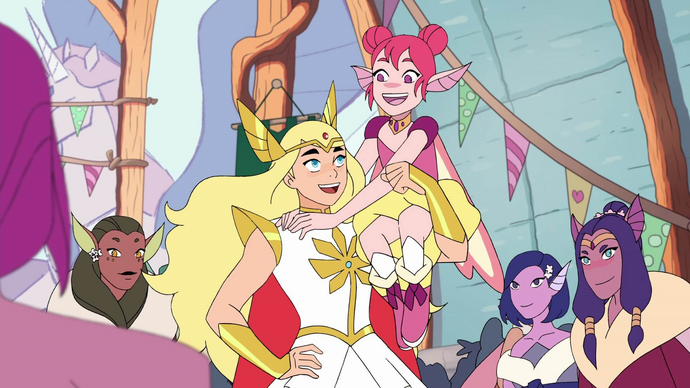 The Valley of the Lost
Pulse
Flutterina is the third episode of Season Four and twenty-ninth episode overall of She-Ra and the Princesses of Power. It was released on Netflix with the rest of Season Four on November 5th, 2019.

The village of Elberon throws a party for Adora, Bow and Swift Wind. A village girl named Flutterina helps when the Horde springs another trap.

Catra jolts awake from nightmares about her betrayals and mistakes, her dreams consisting of Adora and Entrapta questioning her and her motives. She finds Emily at her bedside and scratches it in anger, shouting at it to get out, to which the robot hastily obliges.

Meanwhile, Bow, Adora, and Swift Wind had just finished liberating Elberon, who proceed to throw a party for them in gratitude. There Flutterina introduces herself to Adora, claiming to be a huge fan of hers, and Adora and Bow decide to enjoy the party. Later, a Horde robot is spotted by Elberon scouts, so Adora and Swift Wind set out to destroy it, convincing the townspeople not to retreat.

After defeating the regenerative robot, Adora returned to discover the entire town gone, kidnapped by Horde soldiers who attacked immediately after Adora left for the decoy robot. Flutterina, who was still there and unmolested, asks to accompany Adora and help. Adora agrees and sets out to free the townspeople.

At a nearby Horde outpost, Catra is preparing for Adora's arrival, excluding Scorpia from the plan as she does so. Flutterina conjures up a proposition to enter the base with Adora, even as Bow manages to escape confinement, but Adora gets caught in an electrical trap set by Catra. Flutterina once again proves useful by pointing out a nearby tank to Bow, who uses it to distract the robots long enough for Adora to free herself and drive Catra away. Adora then inducts Flutterina into The Rebellion.

Catra then returns to the Fright Zone with Scorpia, spurning her reassurances and declaring that they are not friends again. Meanwhile, Flutterina accompanied Adora and Bow to Bright Moon, and it is revealed that Flutterina is actually Double Trouble in disguise.