She-Ra and the Princesses of Power Wiki
Register
Don't have an account?
Sign In
in: Episodes, Season 1 Episodes, Episodes that focus on Adora,
and 4 more 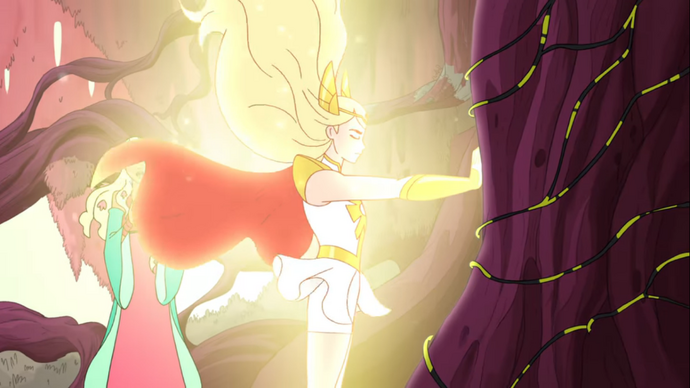 Razz
The Sea Gate
Flowers for She-Ra is the fourth episode of Season One of She-Ra and the Princesses of Power. It was released on Netflix with the rest of Season One on November 13, 2018.

Adora and her friends undertake a relief mission to the besieged kingdom of Plumeria. Shadow Weaver still wants Catra to bring Adora back.

Glimmer gushes about how wonderful it is that Queen Angella is letting Adora stay in Bright Moon and gives Adora a grand tour of the castle. Adora tries and fails to get comfortable in the luxury of her room because she has never been alone before. Adora goes for a walk at night and talks to the Queen about Bright Moon's history, Micah, and the Horde's effect on her kingdom.

Adora sneaks into Glimmer's room in the middle of the night, very unused to these new sleeping conditions. She falls asleep in Glimmer's bed, but this causes the princess to freak out when she wakes up.

In the morning Adora, Glimmer and Bow meet Spinnerella and Netossa at a war council to answer Perfuma's call for aid as Plumeria is under attack by the Horde. The Queen offers humanitarian aid but forbids violence and intervention, much to Glimmer's dismay. The trio offers to escort food and supplies to Plumeria and promises not to intervene in the conflict.

Meanwhile, back in the The Fright Zone, Kyle is getting beaten up by robots during a training exercise, to everyone's delight. Catra interrupts the training exercise to announce that she's been made Force Captain. Shadow Weaver interrupts Catra's announcement to berate her for not bringing Adora back. Catra throws away a drawing of Swift Wind that was taped to her locker. Shadow Weaver blames Catra for Adora's betrayal, the two quarrel over why Adora left the Horde. The Black Garnet then attempts to resist Shadow Weaver leading to the sorceress to yell, "You will not refuse me!" at the runestone.

The trio arrive in Plumeria, with Adora as She-Ra, where they learn that all the plants and trees are dying. Bow notices a ominous plume of smoke in the distance. Perfuma gives a tearful welcome to "The She-Ra" and her companions. The supplies are delivered and the residents of Plumeria give She-Ra a very warm welcome. Perfuma introduces the friends to The Heart-Blossom and explains that this is her runestone, which is the source of all Plumeria's and Perfuma's power. Perfuma explains that the blight on the plants started just after the Horde arrived and they cannot find a cure, but the universe had heard their plea and sent She-Ra to help them. A welcome celebration starts, as they are very wrapped up in the idea that She-Ra could fix all their problems for them and are copiously generous for this reason.

Meanwhile, back in the Fright Zone, Shadow Weaver recharges with The Black Garnet when Hordak interrupts her to scold her for wasting time searching for Adora. Hordak clarifies that the current mission of the Horde is to destroy the Whispering Woods prior to an attack on Bright Moon. Hordak then commands Shadow Weaver to ramp up the attack on Plumeria and forget about Adora.

In Plumeria, the peaceful residents continue to welcome the trio with gifts and lavish praise. The ominous cloud grows more and more ominous. Perfuma asks "The She-Ra" to heal their land, and She-Ra attempts to figure out how to do that, with mixed results. The Heart-Blossom gets infected with Horde poison and She-Ra is helpless to heal it and transforms back to Adora, much to the disappointment of all in Plumeria. Perfuma plans to abandon Plumeria, but Adora still desires to save the kingdom; so, with the help of her friends, Adora steals Horde armor and infiltrates the Horde camp.

Adora, Glimmer and Bow find out that the Horde is poisoning the land with some kind of machine pumping out harmful toxins. Perfuma encourages her people to join the fight with 'war chimes'. The trio engage the Horde soldiers when the residents of Plumeria barge in using their horticultural Hippie skills. Adora calls on She-Ra and destroys the machine, restoring the Heart-Blossom and its tree. Perfuma beautifies the Horde camp with flowers, causing the soldiers to flee. Glimmer convinces Perfuma to join The Rebellion after promising she would get “to hit more things with flowers”. The Plumerian Princess, after agreeing, announces to her citizens that they are "mighty rebels", which is followed by cheering.

Meanwhile, back in the Fright Zone, Shadow Weaver scolds Catra, somehow blaming her for Horde retreat from Plumeria. Catra promises to return She-Ra to the Horde. Shadow Weaver sends out her Shadow Spies to search for Adora.

Back in Bright Moon, Bow and Glimmer throw a sleepover in Adora's room so she will not feel lonely. Glimmer is grounded, again, for a week because she disobeyed her mother, though she happily states the grounding is three weeks less than usual. Queen Angella promises to consider Glimmer's plan to re-unite the Princess Alliance. They have a brief but adorable pillow fight and the trio gets its official name: Best Friends Squad.