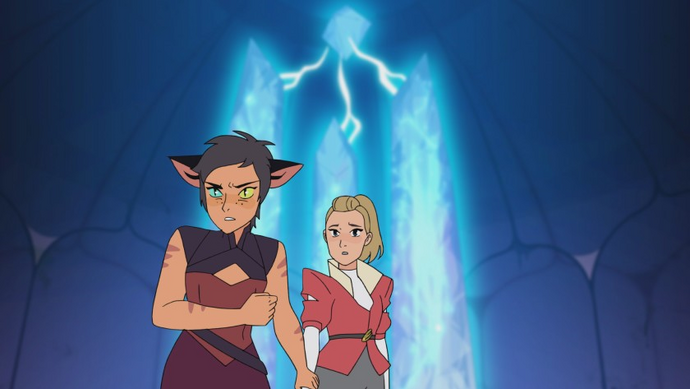 Shadow Weaver and Castaspella join the rebels in their hidden base and says that they have discovered that if they activate the failsafe at the Heart of Etheria all the magic that has been stored there will be set free. Glimmer pointed out the dangers of activating the Heart, but Castaspella points out that releasing the magic is not the same thing as activating the Heart and that there are forgotten tunnels and the Crystal of Arxia under Mystacor which in ancient times was called Arxia. Shadow Weaver said that she could make her way to the fail-safe device, but she needs help.

Entrapta studied the chip she took from Spinnerella and found it more difficult than removing Catra's due to how long it was on. She surmised that the remaining chipped Princesses have little time left until the chip takes them over completely. But she found Prime's computer network that controls all the chips, and she hoped to use that information to sever Prime's connection to all the chips at once. Glimmer teleported Shadow Weaver, Catra, Bow, Adora, Castaspella and Melog to Mystacor where they sneaked inside using Melog's stealth. When they reached the Luminarium Catra broke stealth mode alerting the sorcerer's to their presence and a brief fight ensued with one sorcerer.

Entrapta needed to find a place with a lot of clones in order to analyze their connection to the hive mind, Swift Wind agreed to take her there. Near one of Prime's spires Entrapta found the connection and a clone found her. The clone recognized her and she said his name, Hordak. He became frightened and angry even though he was still carrying the data crystal she gave him. Swift Wind dragged Entrapta away and Horak let them go, hoping that he could forget her.

Shadow Weaver opened the secret entrance within Mystacor. After bickering with Shadow Weaver in the tunnel Adora triggered a fire rune that erupted in fake flames around her. Catra jumped into the fire and 'saved' Adora. Shadow Weaver then tried, and failed, to drive a wedge between Adora and Catra by falsely claiming that her friendship, her love was what was preventing her from being able to summon She-Ra. Upon reaching the fail-safe, which was inside a giant crystal tower, Shadow Weaver instructed In

Adora to open it with the password "Friends of Mara". The instructions inside said, "Someone needs to go inside and accept the fail-safe"; which means that someone must take the fail-safe and carry it bodily into the Heart. Since She-Ra was the only one who could absorb the full power of the Heart only she could go, despite Catra's and everyone else's protestations. Knowing that she may not survive she decided her sacrifice would be better than Prime getting access to the Heart.

But Micah showed up with two other chipped sorcerers and a fight erupted. Using the fight as a distraction Adora entered and accepted the fail-safe. Micah used dark magic to entrap the heroes and he tried to interrupt Adora's accepting of the fail-safe. Seeing her friends in distress she summoned She-Ra, accepted the fail-safe and bound Micah and the two sorcerers. Everyone fled Mystacor for their base where Entrapta worked on her computer. Catra was so upset at seeing Adora's willingness to sacrifice herself that she left with Melog rather than see Adora leave her again.

Retrieved from "https://she-raandtheprincessesofpower.fandom.com/wiki/Failsafe?oldid=47028"
Community content is available under CC-BY-SA unless otherwise noted.