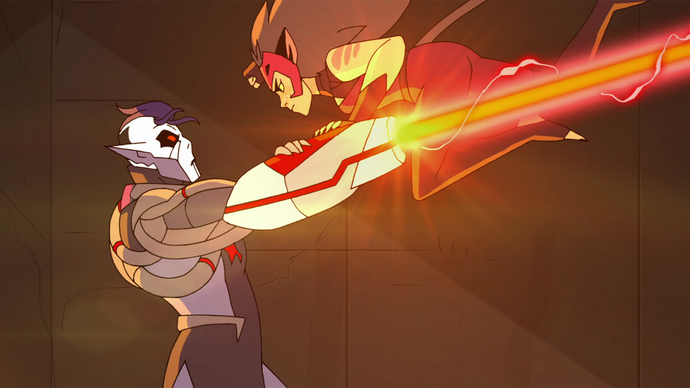 Destiny Part 1
Horde Prime
Destiny Part 2 is the thirteenth and final episode of Season Four, and the thirty-ninth episode overall of She-Ra and the Princesses of Power. It was released on Netflix with the rest of the fourth season on November 5th, 2019.

Catra and Hordak fight one another as Glimmer and Scorpia arrive in the Fright Zone. Adora sets off in a last-ditch attempt to stop Light Hope's plan.

Adora leaves the wounded King Micah in Bright Moon, sending Swift Wind and Bow to the Fright Zone to stop Glimmer and Scorpia. Adora herself heads to the Crystal Castle to stop Light Hope from activating the Heart of Etheria, even as Glimmer and Scorpia arrive in the Fright Zone to balance the planet. They are quickly caught by Lonnie, Rogelio, and Kyle, but they are fed up with Catra's hysterics, and let them in without challenge, as they are themselves leaving the Horde.

In other areas of the Fright Zone, Hordak is going on a rampage, destroying his own capital city in his rage to destroy Catra, who barely manages to dodge each blast of his powerful ray gun. Eventually after taunting him, Catra manages to close with Hordak, destroy his gun, and remove his First Ones' tech shard from his suit, leaving him defenseless as a rafter collapses on him.

Scorpia and Glimmer arrive at the Black Garnet, the room in ruins from Hordak's rampage. Scorpia connects with the it, and far away in the Crystal Castle, Light Hope is immediately aware of the Runestone coming online. She links it with the other four, and balances the planet, restoring the Heart of Etheria to full functionality.

Across Etheria as they ambush the Horde army, the Princesses all surge with newfound power. Mermista easily batters entire fleets with tidal waves while Frosta and Perfuma lay waste to legions of Horde Robots around themselves with blasts of ice and vegetation. Outside the Crystal Castle, Adora surges with raw power and dread as she realizes that the weapon is active once again.

As Catra savored her victory, the mocking voice of Adora comes to her, and she panics. Adora then transforms into Double Trouble, who taunts Catra relentlessly. Double Trouble cuts through Catra's delusions, identifying her hurt, the lack of trust from Shadow Weaver, Hordak, and Adora not needing her, of everyone abandoning her. Double Trouble points out that not all of them are at fault, but rather, Catra pushed them away, and, transforming finally into Scorpia, blames Catra for her predicament.

To top it all off, Double Trouble reveals the devastation of Catra's armies by the turbocharged Princess Alliance. When accused by Catra of betrayal, Double Trouble was unruffled, saying to always choose the winning side to survive. With the rebels' "superweapon" revving up for use, Double Trouble assured Catra that everything she ever worked for would soon be vaporized.

As Glimmer corners Catra, who merely sat there and invited death, princesses all across Etheria came under the Heart of Etheria's control. First Ones' writing appeared on each princess and runestone. Mermista fell from her vortex, Frosta and Perfuma collapsed, and Scorpia collapsed just a few feet from Frosta. While this happens, light and power surges up from the planet into the skies.

Back in the Crystal Castle, the light funnels down and channels into Adora's sword even as she stands immobilized. She asserts that the weapon will not work due to Mara moving Etheria into Despondos, but with full functionality restored, Light Hope simply teleports the planet out of Despondos with ease, using Adora to do it.

The moment this happens, Swift Wind loses his ability to fly, and Bow crash lands with him and Entrapta. A brought light floods the sky, and Entrapta recognizes it as a massive portal, just before they arrive in the wider universe; the stars have returned to the sky. In the Fright Zone, Glimmer realizes her mistake and attempts to destroy the Black Garnet with magic, to no avail.

The other princesses are spontaneously freed of their compulsions, even as Hordak prepares to kill Glimmer. Just before he can, an arrow from Bow blasts in his face. He prepares to swing again, but is suddenly beamed up to Horde Prime's ship along with Glimmer and Catra, leaving Bow alone. A fleet of space ships then descends upon the Etherian atmosphere.

In other areas of the Fright Zone, Hordak is going on a rampage, destroying his own capital city in his rage to destroy Catra, who barely manages to dodge each blast of his powerful ray gun. Eventually after taunting him, Catra manages to close with Hordak, destroy his gun, and remove his First Ones' tech shard from his suit, leaving him defenseless as a rafter collapses on him.

On Horde Prime's ship, Hordak proclaims that the empire he built on Etheria was for Prime, that he might join Prime's side once again. Horde Prime however, upon reading his thoughts, is dissatisfied with Hordak, and sends him off to be reconditioned. He initially intends to destroy Etheria to wipe away Hordak's embarrassment, but Catra convinces him to keep it so that he could use the Heart of Etheria as a weapon.

Back on the planet below, Adora vows to save Glimmer, and the rest of the universe.

Retrieved from "https://she-raandtheprincessesofpower.fandom.com/wiki/Destiny_Part_2?oldid=39557"
Community content is available under CC-BY-SA unless otherwise noted.