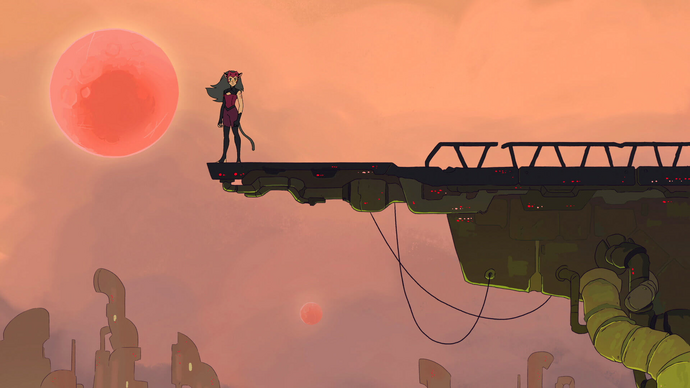 Beast Island
Destiny Part 2
Destiny Part 1 is the twelfth episode of Season Four and thirty-eighth episode overall of She-Ra and the Princesses of Power. It was released on Netflix with the rest of the fourth season on November 5th, 2019.

Glimmer tries to convince Scorpia to reconnect with her Runestone. On Beast Island, Entrapta reveals dire new details about the Heart of Etheria.

Queen Glimmer returns to Bright Moon, asking Scorpia to reconnect to the Black Garnet. Shadow Weaver became concerned, as the Black Garnet originally supplied her with power, and tried to appeal to the other princesses. However, Glimmer had already sent them away to prepare to ambush the Horde, having released Double Trouble to mislead The Horde.

On Beast Island, Entrapta transports Adora, Micah, Bow, and Swift Wind to the island's center. They try to talk to Entrapta, saying they wanted to rescue her, but she clammed up when they mentioned Hordak. Adora spoke to Entrapta about the energy at the core of Etheria to ask for her help, at which point Entrapta immediately recognized the Heart of Etheria Project, and resumed their journey toward the island's center.

In the Fright Zone, Catra continues to be unstable, lashing out at Lonnie, Rogelio, and Kyle. She dismisses them until Double Trouble arrives, lying to her that Bright Moon is undefended, although being honest about She-Ra being gone. Reacting to this advice, Catra orders a march on Bright Moon, assuring Hordak that victory is within their grasp. In Bright Moon itself, Shadow Weaver attempts to reason with Glimmer, nearly succeeding in swaying her, until she went too far and invoked Angella's memory, at which point Glimmer left Shadow Weaver behind.

Back on Beast Island the group arrives at its center, with Micah and Swift Wind wanting to turn back due to the signal's strength. Entrapta ushers them inside, however, to a First Ones temple. There she explains that she was correct about the First Ones adding technology to the Etheria, having learned that it was for the Heart of Etheria, which She-Ra and the other princesses are a part of.

Entrapta further explains that all of the princesses' Runestones must be engaged for the Heart of Etheria to function, and that She-Ra is the key. With all of the power at the core of the planet, it would need to be tightly focused and directed outward in order to be properly fired at enemies, and She-Ra was the only being with the capacity to channel that degree of power and survive. In order to ensure compliance, the engineers of the heart constructed the Sword of Protection to control She-Ra and direct the deadly weapon where they desired, through the sword. Entrapta tells Adora that she would have no choice in that situation if the planet became balanced, although the planet is not yet balanced; Scorpia must connect to her Runestone to do so. Adora realizes they must return to Bright Moon to find her.

At that moment in Bright Moon, Glimmer befriends Scorpia and convinces her to reconnect with the Black Garnet. Adora and company go to leave, but Entrapta does not follow, succumbing to the "signal" on Beast Island. Adora quickly turns into She-Ra, extricating Entrapta from the encircling vines, and King Micah blasts completely through the sealed entrance of the island center with a sorcerous concussion.

As they flee the island, they get pinned down on a bridge, surrounded by pookas. Micah blasts several of them away, but one manages to bite his ankle. As they are encircled, another Beast Island creature arrives, a gigantic snake beast that collapses the entire bridge and sends everyone sprawling. It attempts to crush them, but Micah draws forth yet more sorcerous power into a dome-shaped force field around them, holding off the massive creature single-handedly, despite the strain on his wounded leg.

While Micah held the force field, Bow attempted to reassure Entrapta that they would not abandon her again, and although he made some headway, Micah's shield eventually fell due to his exhaustion. Out of time, Adora offered to let Entrapta see a fully functional First Ones' space ship, which finally snapped her out of it. She summoned her robot, attacking and stalling the now-numerous snake creatures and allowing everyone to escape the island.

Everyone on Beast Island piles into Darla, returning to Bright Moon even as Glimmer teleported away with Scorpia, having received the go-ahead from Double Trouble. Micah joyfully enters his castle, looking for Glimmer, but only finds Shadow Weaver, his former master, sitting on the throne. He immediately attacked her with a sorcerous blast, but Shadow Weaver deftly separated it around herself.

Once more in the Fright Zone, Double Trouble comes before Hordak disguised as She-Ra. Seeing Hordak's patience quickly run out, Double Trouble gets to the point and reveals that Catra betrayed Hordak by sending Entrapta to Beast Island. Due to his friendship with Entrapta, Hordak quickly became enraged, and laid waste to his laboratory. He then stayed there, waiting for Catra to return, at which point he attacked her.

Retrieved from "https://she-raandtheprincessesofpower.fandom.com/wiki/Destiny_Part_1?oldid=49198"
Community content is available under CC-BY-SA unless otherwise noted.