She-Ra and the Princesses of Power Wiki
Register
Don't have an account?
Sign In
in: Episodes, Season 5 Episodes, Episodes that focus on Catra,
and 3 more 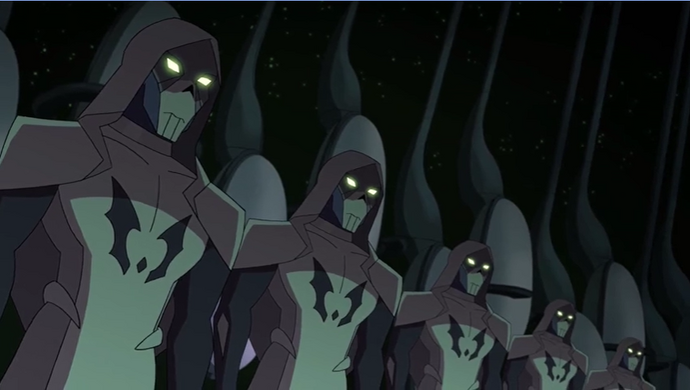 Launch
Stranded
Corridors is the third episode of Season Five and forty-second episode overall of She-Ra and the Princesses of Power. It was released on Netflix with the rest of the fifth season on May 15, 2020.

On board Horde Prime's vessel Catra gets uncomfortable with the clones following her every move. She ran into one clone who called her by her name, and because of that she realized it was the reconditioned Hordak, she questioned him and left him with an internal struggle. Then Catra visited Glimmer in her cell again and the two began talking and shared a laugh and some fond memories of Adora. Then she followed two clones who beamed to the surface.

On Darla, Bow tried to keep Entrapta from tinkering with it and possibly causing irreparable damage. But there was a malfunction anyway and the ship shut down to preserve energy. Entrapta revealed that she named the ship Darla and went to fix the problem with Bow chasing her frantically.

Horde Prime summoned Catra to his throne room to ask her about an ancient ship that he discovered leaving Etheria. He tasked Catra with questioning Glimmer about the ship and reporting back to him the information. When she answered that it was impossible Prime called Hordak forward and demonstrated the reconditioning ceremony on him. He then told Catra to get the information from Glimmer once again, and Catra, in fear of her memory being wiped, obliged.

Catra entered Glimmer's cell and briefed her on what Prime knew. Glimmer begged Catra to resist Prime, pointing out that Adora was on her way and if Prime used the Heart of Etheria, he will destroy the universe. Frightened, Catra fled, leaving Glimmer in tears.

Aboard Darla, Entrapta created spacesuits for everyone so she could fix the ship from the outside, which totally freaked out Bow and Adora.

Prime and the Clone Army used Catra's information to find Darla, before thanking and praising Catra for her decision. Catra left the throne room, and a memory played of a time when Adora and her were kids, fighting. She subsequently returned to Glimmer's cell, attacked and paralyzed Hordak, who was serving the Queen her dinner, and freed Glimmer.

Catra then led her to the transport pad, telling her to escape with Adora and not return. Catra contacted Adora and told her the coordinates in which Glimmer would appear. She demanded that Adora not come back to Prime's ship, to leave her behind, and beamed the Queen off Prime's ship as more clones started to pile on her. She screamed an apology at Adora before she was overcome by clones.

Entrapta piloted Darla to Glimmer's coordinates while Adora and Bow did a spacewalk rescue of the Queen, who was shielded from the harsh conditions surrounding her with some sort of force field.

Prime had Catra bound and brought before him where he accused her of treachery and promised to find Glimmer and She-Ra. Catra scoffed in his face.