She-Ra and the Princesses of Power Wiki
Register
Don't have an account?
Sign In
Advertisement
in: Episodes, Season 4 Episodes, Episodes that focus on Adora,
and 8 more

View source
watch 02:24
Wiki Targeted (Entertainment)
Do you like this video?
Play Sound 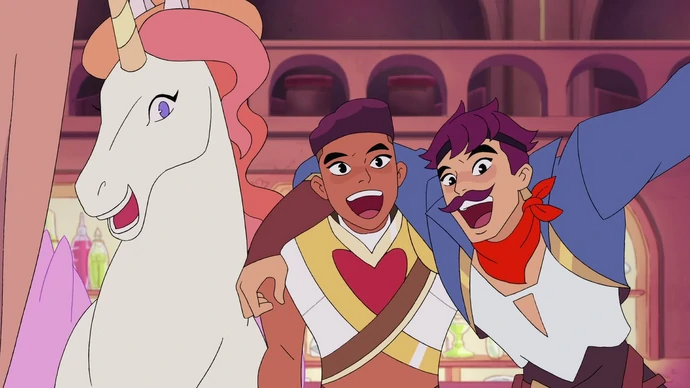 Mer-Mysteries
Hero
Boys' Night Out is the eighth episode of Season Four and thirty-fourth episode overall of She-Ra and the Princesses of Power. It was released on Netflix with the rest of Season Four on November 5th, 2019.

With tensions rising between Glimmer and Adora and morale at an all-time low, Sea Hawk, Bow and Swift Wind go out for some fun. Things get extremely out of hand.

Continuing his conquest, Hordak uses his new laser to quickly reduce coastal towns to rubble even as The Rebellion rushes to evacuate the residents. After securing everyone, The Rebellion retreats and Swift Wind, Bow, and Sea Hawk go on a fun trip.

In the Bright Moon War Room, Bow attempts to downplay the Rebellion's ruinous loses in order to maintain morale. He cites the benefit of capturing Double Trouble, who, despite revealing a wealth of information initially, has now decided not to talk. In the process of reviewing their dubious assets, Bow mentioned that Glimmer joined the earlier evacuation efforts without notice, angering Adora and starting another heated argument. Despondent over their fighting, Bow agreed to a "boys' night out" with Sea Hawk and Swift Wind.

Meanwhile, Hordak deploys Catra back to the Fright Zone while he "remains in the field", and Catra arranges a meetup with an unresponsive Scorpia. In Seaworthy, Sea Hawk manages to get Bow to reluctantly join in on a catchy shanty with him and Swift Wind, rejoicing in friendship, until several men that Sea Hawk hired arrive and capture them. Sea Hawk explains that it's meant to be a ruse so that the Princesses would unite to save them, until he realizes that the people who captured them are not the ones he hired.

The Trio awaken in the middle of the ocean, tied to the mainmast of their captors' ship. Bow and Sea Hawk have Swift Wind try to contact Adora through their "sacred bond", but as Adora is arguing with Glimmer again, she "hangs up" on Swift Wind. Sea Hawk then sends a seagull to Mermista, calling for help, but Admiral Scurvy shows himself and forces Sea Hawk walk the plank. Sea Hawk pleads with Scurvy, but Scurvy is angered about Sea Hawk burning down his ships, and only spares him because the Horde are willing to pay a ransom for him.

At the remains of the Salineas Sea Gate, Catra mentions how winning isn't as satisfying as she hoped it would be. However, Scorpia does not respond or show up to meet Catra as she requested, and so Catra returns to the Fright Zone. Back at sea, Admiral Scurvy ransoms his three prisoners to Octavia of the Horde, brushing off Sea Hawk's pleas and telling Bow that his friends aren't coming.

In Bright Moon, Glimmer and Adora's argument continues to rage. Glimmer insists on her rights as queen, fed up with Adora ostensibly attempting to order her around, while Adora insists that Glimmer not "push (her and Bow) away". Adora implores Glimmer to work together to regain what they have lost, but Glimmer is tired of hearing that they'll simply "fix" it. As the argument escalates, Adora claims that she could not possibly be to blame for Salineas falling, but Glimmer expected She-Ra to "save us", and asserts that in actuality they are in a far worse situation now than before Adora joined them.

Reeling, Adora says she's trying her best, to which Glimmer says that it is not good enough, and that if it was, her mother would still be alive, blaming Adora for her death. Adora, having heard Angella's last words and seen her vanish into the depths of interdimensional space, began to cry. Seeing the hurt look on Adora's face, Glimmer immediately regretted her outburst and attempted to apologize, but, before she could, Mermista barged into the hallway, having received a message from Sea Hawk's seagull informing her of their capture.

In captivity, Bow is entirely unmoved by Octavia's threats, depressed and defeated. He claims to be tired of being the only person willing to work to keep their friendships from falling apart, of doing everything he can to be positive and to keep everyone together, only for Adora and Glimmer to hate each other and completely forget about him when he needs their help, despite all his efforts.

Moments later, Glimmer teleports onto the ship with Mermista and Adora in tow. Adora transforms into She-Ra, bowling the Horde sailors over, and everyone works together to fight off the outpouring Horde sailors, singing together in glee. Bow and Mermista get over their gloom and Adora and Glimmer smile at each other briefly, but the new bridge between them is too wide to cross. Bow makes to hug his friends, but Adora and Glimmer can't stand to be near each other.

In the Fright Zone, Catra is devastated after she enters Scorpia's quarters, finding Scorpia gone and a goodbye note on her bed. Back at sea, Mermista is glad to be back in the fight now that her depression has past and Bright Moon's ice cream stores are empty. Glimmer also tries to reach out to Adora, but she can't stand Glimmer touching her, and they both storm off. Bow tries to talk to Adora, but she is set on a plan to use Mara's weapon to defeat the Horde by herself, determined to prove to Glimmer that she will be able to fight the Horde.